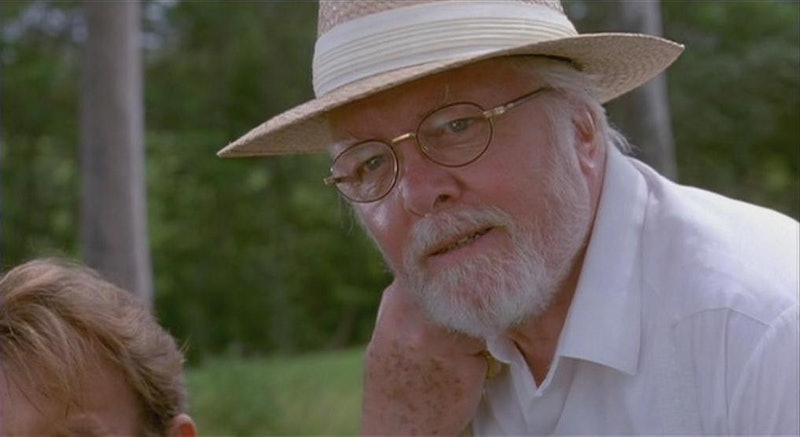 If you're going into Jurassic World expecting to see a total homage to the first movie, you might want to lower your expectations: while the new film may be a direct sequel of the original, it's much more of its own movie than a reference-filled ode to Park. Still, there are a few nods to the first film in the franchise that fans will certainly appreciate: the ominous soundtrack, the casting of B.D. Wong, and, of course, all those nostalgic shout-outs to John Hammond. Yet while fans of the series will certainly appreciate the references, newcomers to Jurassic might be asking themselves, who is John Hammond?

For those unfamiliar with the original film, Hammond, played by Richard Attenborough, was the CEO of InGen, the company that masterminded the Jurassic Park concept. Wealthy and brilliant, Hammond had been the force behind several animal-filled attractions around the world, but his dinosaur park was his greatest creation yet: a massive, incredible area filled with once-extinct creatures, open for all the world to see. Yet as Jurassic Park fans saw, his plans didn't go too smoothly; the test run of the park was a complete disaster, thanks to power shutdowns, corruption, and dinosaurs run amok. At the movie's end, Hammond had come to terms with his park's failure, even if he was still wistful about the potential it had.

Sadly, Attenborough passed away in 2014, so he was unable to appear in the latest Jurassic film. There are, however, several references to him in the new movie, most prominently a statue of him placed in the middle of the visitor's center:

There are also a handful of verbal references to the late leader, with his name mentioned in several scenes. For fans of the original film, the mentions act as a perfect tribute to Hammond (and Attenborough), who may not have been the most likable character, but who was certainly a huge presence in the movie. And for those who never saw Jurassic Park (but really, what are you doing seeing Jurassic World?), the references may be a bit confusing, but even if you're unfamiliar with exactly who Hammond is, it's clear he had a major impact on the park and its legacy.

Still, if you are one of those World viewers who wasn't quite sure who the guy everyone kept talking about was, do yourself a favor and re-watch the original movie: John Hammond was a highly entertaining character, and understanding his involvement with the park will make watching World an even better experience than it already is. Plus, you really should see those original dinosaurs; there may have been no Indominus Rex, but man, were those guys still scary.