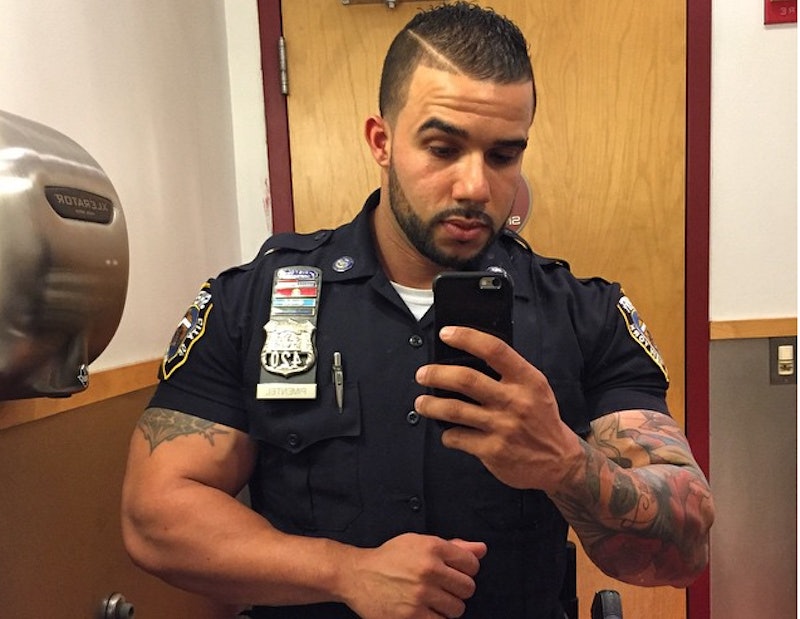 Nobody likes getting pulled over, but once you take a look at ridiculously hot New York City cop Miguel Pimentel, you might reconsider your aversion to seeing those flashing blue lights in your rearview mirror. His current profession is merely the most recent in a series of sexy career choices for the policeman, who is a former Marine and amateur bodybuilder. Am I saying that he's the real-life, ultra-masculine equivalent of Officer Bennett from Orange Is the New Black? Yes. Yes, I am.

Oh, I almost forgot. In case you weren't already plotting a way to get him to frisk you, you should also know that Pimentel speaks Spanish fluently, and he frequently accompanies his various and sundry shirtless selfies with captions in both English and Spanish. According to the New York Daily News, this comes in handy when he's in uniform and women start discussing his attractiveness in Spanish, assuming he won't understand. (Don't even front: you know you would totally do the same thing with your friends.) "I usually just act like I don’t know what they’re saying until I’m about to leave and then I’ll tell them, ‘You know I understood what you were saying, right?'" he told the New York Daily News.

Sorry, what was I saying? It's hard to focus around all those muscles.

Oh no, my hand slipped. Darn. According to Cosmopolitan, NYC residents and Facebook commenters aren't the only ones to appreciate Pimentel's chiseled physique. Playgirl reportedly offered him the chance to pose for a nude, cop-themed shoot, although he told Fox News Latino that he would have to pass since his girlfriend "would [not] be too stoked" about the prospect. If your heart just broke into a million pieces reading that, there is a small silver lining: he wouldn't rule out a less risque photoshoot. "If it's not completely, completely nude I'd be OK with it," he added.

Good Lord. How is he that attractive with so many clothes on? I need to stop or else I'm going to be distracted for the rest of the day. Between hunky cops like Pimentel and absurdly symmetrical felons like Jeremy Meeks, maybe Hollywood is right to cast so many attractive actors in their crime shows.

OK, I'll leave you with just one more.