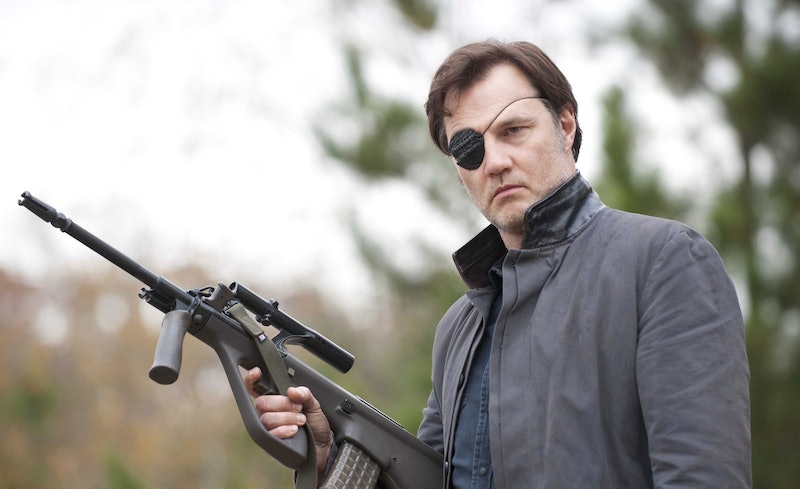 A lot of crazy shit went down during last week's episode of The Walking Dead , but nothing crazier than the major reveal that took place during the final few seconds of the episode: The Governor, thought to be dead by Rick and co., is very much alive, and seems to actually be living in another section of the prison not occupied by the core group.

As for what this means for the group remains to be seen — personally, I have a theory that the Governor was behind all of the major issues that have been happening with the prison this past season — the Governor's return promises to amp up the drama in the series, which has already been at a fever pitch thanks to that mysterious virus which was threatening everyone's lives. While more drama in a show like this one isn't ever a bad thing, I do have to wonder: Is the drama his return will cause even necessary?

I'm not opposed to more confrontations between Rick, the gang, and the Governor. His presence during last season was a great addition, and paved the way to some really interesting, nail-biting, action-packed episodes, some of the best of the season. But at this point in the comics, the Governor is already dead, meaning that the TV writers are veering pretty far from the story structure of the comics — and allowing more time for the focus of the story to veer away from Rick and co. onto a character who is very obviously going to die at some point. Is this necessary for viewers to even sit through? What's the incentive in even becoming invested in this guy?

Additionally, it's being reported that the Governor will have two "standalone" episodes that will feature an ample amount of flashbacks to help us better understand his character and where he came from, something that just seems like overkill and a distraction from the core group. There's a lot to focus on with those guys as it is without spending two whole episodes focusing on the character development of a guy that we're supposed to hate.

I'm not saying that TWD should make him a wooden, one-dimensional villain for the sake of saving airtime, of course, but the little bit of backstory and personality we received in season three is enough — if there was more, we should have been told then, not now when he's been an established character for a year. Airtime at this stage is too valuable to waste on plots outside of core group, and it keeps us stalled in the story, as if the writers couldn't come up with enough material to fill out the season or something. Having well-rounded characters is important, but ensuring that the plot moves along quickly enough is too.

It's not clear which episodes will be the Governor's standalone eps, but Wetpaint theorizes that it will be episodes 6 and 7. Whatever the case, we can only hope that this small break propelling the plot forward won't lead to more stalling in the main plot — we already went through that in Season 2, after all, and everyone remembers how badly that went.