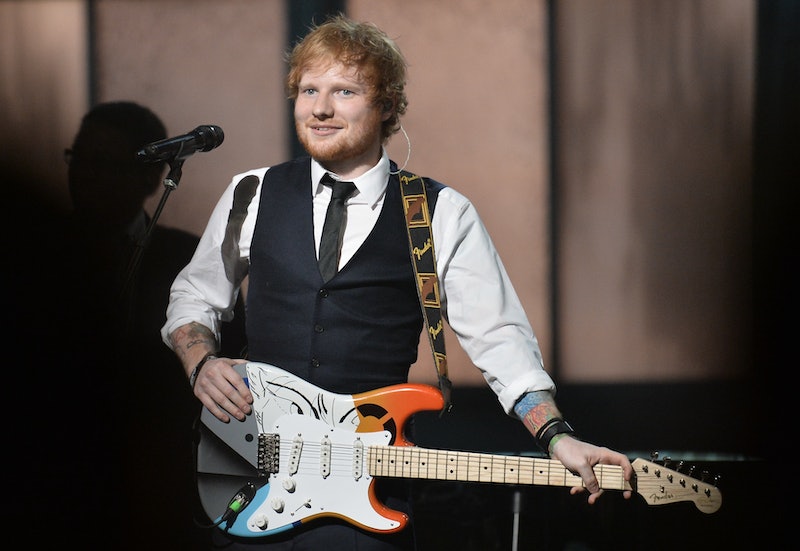 Ed Sheeran is a man of many talents. He's an amazing singer, a fantastic songwriter... and a master of disguise? It's true — the star has donned many a costume over the course of his career, and I think it's about time Sheeran's costumes are ranked in order of awesomeness. After all, while we all know his songs are great and can't stop singing along to them when they play on the car radio (it can't be just me), the "Don't" singer is becoming just as well known for all the fun costumes he's worn over the years.

Actress Sarah Ramos from Parenthood has been busy tweeting Sheeran costumes all weekend, alerting us all to the fact that the singer/songwriter loves to dress up as many, many different things — whether it's iconic movie characters, soldiers, or just characters wearing a pink wig. But he's not the only one into dressing up — Hollywire's Chelsea Briggs actually donned a Sheeran costume — stubble and all — for Halloween in 2014. The star's response when she showed him the photos at the KIIS FM Jingle Ball? "I f*cking loved it." He is, after all, a man who can appreciate a great costume.

Here are Sheeran's costumes ranked in order of awesomeness, because it totally needed to be done:

Who doesn't love a man in uniform? Especially a patriotic one.

Not technically a costume, but it's Sheeran, Simpsons-style. They even included the tats.

Also not technically a costume, but Sheeran's face has made it onto a raincoat approved by Kendall and Kylie Jenner. It doesn't get more fashionable than that.

Not actually a costume, but maybe some weird Photoshop?

That's what Sheeran called this costume. I wonder what Taylor Swift thought of it.

"I am the Lego man," Sheeran captioned this photo. He is, indeed.

Yeah, baby! Sheeran looks like a natural in the British international man of mystery's threads.

This is just too funny. Star singer + a goofy gingerbread cookie costume from Shrek = comedy gold. Is there anything he can't do?