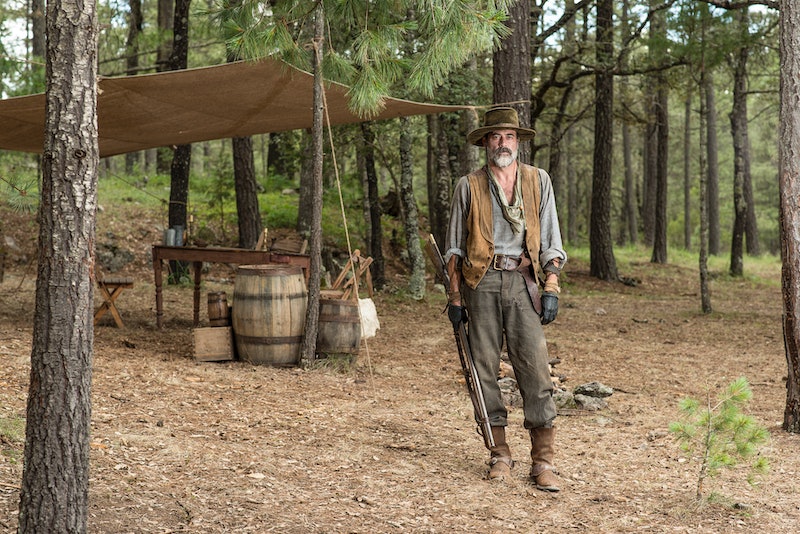 There's something about real-life figures being wrapped into historical series that makes them more interesting, which I think is a big factor in the success of History's Texas Rising. For example, Jeffrey Dean Morgan's character Erastus "Deaf" Smith was a real Texas Ranger who did in fact fight in the Texas revolution and help General Sam Houston on the frontier. But of course, there's no way that every single thing in the miniseries could possibly be based on real life.

Most of what History has shown is based on Smith's real life, though it has embellished in places to make for a better story. Thomas W. Cutrer wrote for The Texas State Historical Association, he was a partially deaf man — he lost his hearing after a sickness in the 1820s, which developed into the consumption that has been shown on Texas Rising. So even though his nickname is pronounced "Deef," it is based on his real hearing loss. Smith is a real hero to Texans, which is clear in Cutrer's glowing portrait, and Smith even has a Texas county named after him. It's clear that Morgan has a lot of respect for the man he's playing too, as he told the Star-Telegram, "I hope we give justice to the man, because he was a hell of a guy."

Deaf Smith doesn't get brought up with the same reverence as a lot of his fellow Texas Rangers outside of the state, but that doesn't mean he wasn't just as hero. But one significant difference between the TV portrayal and real version of Smith is that while he had many children with his wife, Guadalupe, he never adopted a Mexican orphan, at least according to the genealogy report available on Access Genealogy, which only credits Smith's daughter and son.

And Smith may have never even joined the Texian army if he hadn't faced a blockade from Mexican soldiers who kept him from his home. It upset him so much that, in the words of the Texas State Historical Association, "when a Mexican sentry refused to allow him to enter San Antonio to visit his family, Smith joined Stephen F. Austin's army, which was then besieging the town." Meanwhile, Smith became a valued and appreciated member of the revolutionary army, especially when he carried messages, scouted, and gathered intel, just like on Texas Rising. The TSHA quotes William B. Travis, Alamo commander, to call Smith "'the Bravest of the Brave' in the cause of Texas."

Deaf Smith incorporates multiple storylines on Texas Rising, and Morgan has managed to navigate between them, walking the line separating reality and fiction so well that the differences don't even matter — what matters is portraying the often overlooked early American hero. Even though Erastus "Deaf" Smith may not be super familiar to audiences now, that doesn't mean he wasn't a very real part of the Texas Revolution.

More like this
ITV’s 'Grace' Will Likely Return for A Third Season — & Many More After That
By El Hunt
9 Honestly Unbelievable Revelations From The WAGatha Christie Trial
By Frances Stewart
What Does Michael Peterson’s Family Think Of 'The Staircase'?
By Arya Roshanian
Michael Peterson & Sophie Brunet’s Relationship Timeline
By Morgan Leigh Davies
Get Even More From Bustle — Sign Up For The Newsletter