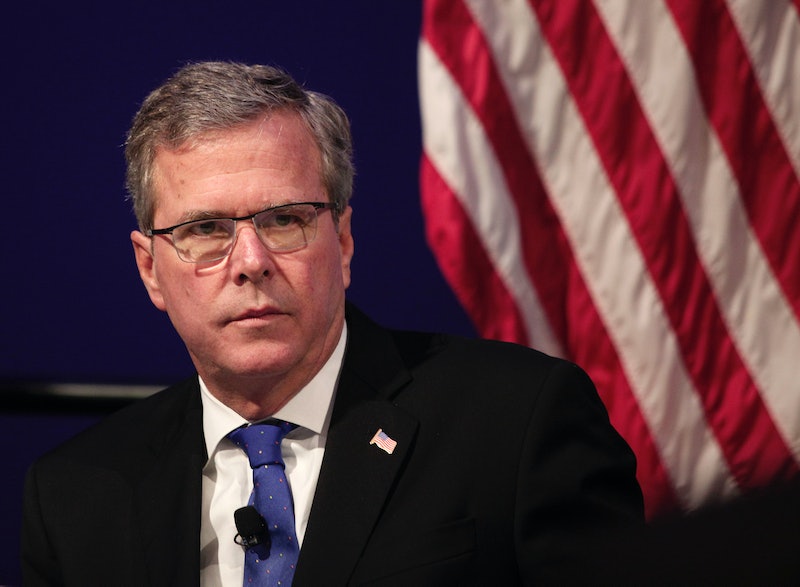 Former Florida Gov. Jeb Bush announced his candidacy for president on Tuesday, and now he will start his campaign as the third (hopeful) Bush to run for president. But Bush is trying to separately from both his brother and father. He has even said before that he isn't them and that his campaign will be used to show that he is "his own man," according to CNN. Though Bush has fiercely defended his brother's policies, he's using social media create a new image of himself. Jeb Bush's Twitter account can help us learn more about who he is as a husband, where he stands on government surveillance, and his views on women's rights.

Bush is now one of 11 Republican hopefuls in the 2016 election, and he's hoping to set himself apart with his staunch fiscal conservatism, according to the Guardian. He was responsible for millions of dollars of tax cuts during his time as Florida governor, took on public sector unions, and was famous for blocking spending bills. He has also championed his Catholicism and the right to life, so much so that he was widely known for fighting doctors from removing a feeding tube from Terri Schiavo, a Florida woman who had been in a persistent vegetative state for 15 years, according to the The New Yorker. Here are five more things we can learn about Bush from his Twitter account.

Bush met his wife, Columba Bush, 17 years ago in León Guanajuato, Mexico, according to his Twitter. It is covered with photos of their travels together and Bush's own support for his wife's work with domestic abuse awareness.

He also gives regular shout outs to his mother, Barbara Bush. He celebrated her birthday by creating a public photo on Facebook where anyone could wish her a happy birthday.

He Is Completely Fluent In Spanish & Not Afraid To Embrace It

Bush speaks nothing but Spanish at home, according to The Daily Beast, and it's been that way for years. His wife, Columba, is originally from Mexico. Bush has been heavily criticized by the far right for his more understanding policies on immigration and education for the children of immigrants.

He Is Open About His Anti-Abortion Views & Catholicism

Bush has recently tweeted asking Americans to support policies that protect certain religious beliefs. Most of these laws, often called "religious freedom" laws, take the form of bills that would allow state officials to refuse to perform same-sex marriages or allow businesses to refuse to serve same-sex couples when it violates their "sincerely held" religious beliefs. He credits his wife and the former Pope Jean Paul II for his conversion to Catholicism.

Bush is also another religious GOP member who stands against abortion rights. He has urged support of anti-choice policies on Facebook and credits religious arguments for them.

He Is Very Pro-Israel & Supports Intervention In The Middle East

Bush found himself in hot water recently for saying he supported his brother's decision to go to war in Iraq. He later changed his mind and said he believes it was actually a bad decision, but his fierce, stubborn loyalty hasn't been easily forgotten. Now, he continues to support intervention in the Middle East, and he has even condemned President Barack Obama's more moderate stance on Israel. The president has criticized Israel Prime Minister Benjamin Netanyahu for flip flopping and saying that the country would never pursue a peaceful, two-state solution with Palestinians.

He Is Actually Pretty Funny Sometimes & Doesn't Take Himself Too Seriously

Bush has made a number of ridiculous comments in the past about women and his brother's foreign policy. Those might continue, but at least they're slightly countered by his often funny, self-deprecating jokes on Twitter. He knows when to stop the campaigning for a sec and just have fun on the internet, like when he joked about how excited he was to speak during Liberty's 2015 graduation commencement, for example.