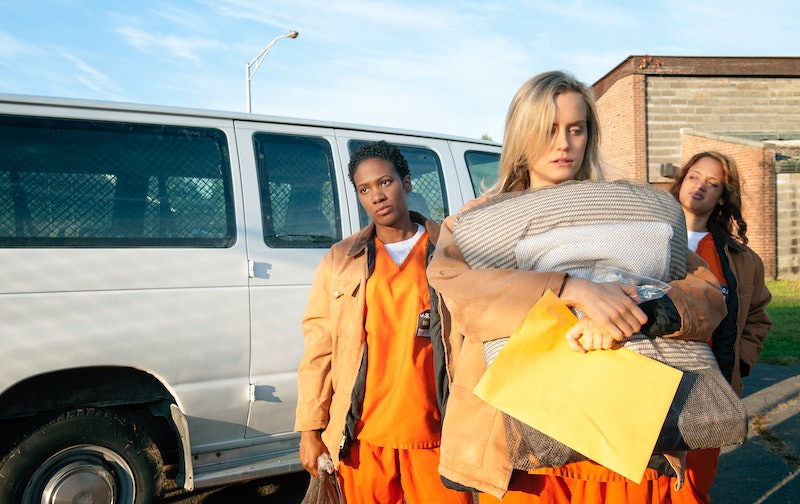 Even if you haven't had time to mainline Orange is the New Black Season 3 in its entirety this weekend, I am going to wager that you have at least watched the excellent premiere, "Mother's Day." In true OITNB fashion, Season 3 opened with an emotionally intricate outing that perfectly set the mood for the season to come. So far, every season premiere of OITNB has instantly hooked me. This show is exceptionally good at beginnings. Whether it chooses to follow Piper's first day at Litchfield, throw the viewers straight into the unknown, or closely examine the way each inmate's family shaped them, each opener has been an enthralling and exceptional way to enter the world of Litchfield. But does one premiere stand out from the pack?

Ranking the three episodes makes my heart hurt because each one would land on my list of favorite OITNB episodes of all time, but I'm doing it anyway. Hey, it's going to a whole year before there are more new episodes, I have to pass the time somehow, and there are definitely worse ways to do so than by revisiting three superb episodes of television. Let's take a look back at how each season started, and then at the end, I will reveal which premiere would kick the other two premiere's butts in a prison fight.

In the beginning was there was Piper, and Piper knew less than Jon Snow. OITNB came roaring into focus by throwing the viewer and Piper straight into prison with no safety net. Watching Piper grapple with her loss of freedom because of a crime she committed a decade before was juxtaposed against the realities of day to day prison life. What was mundane for the other prisoners was foreign and unsettling for Piper and for the viewer. Piper was starved, threatened, and generally left adrift with no idea how to survive in her new environment.

The episode also introduced indelible characters like Red, Suzanne, and Daya, while also ending on a thrilling high note when Piper came face to face with Alex. It didn't take a second episode for me to fall in love. I was sold from the opening shot in which Piper talked about how the shower had always been her happy place... until she ended up in prison. "I Wasn't Ready" was a pretty flawless way to start the series.

The aftermath of Piper losing control and completely beating the crap out of Pennsatucky did not disappoint. Personally, I love "Thirsty Bird" because of how much it keeps the viewer in the dark. Piper doesn't know if Pennsatucky is dead or alive, or why she's being transferred to Chicago, and later she cannot understand why Alex screwed her over a second time. The viewer is as lost as she is, and in many ways the entire hour feels like a nightmare. The episode is as dark and claustrophobic as OITNB has been to date, and I reveled in every moment of it.

However, the one thing "Thirsty Bird" lacks is the show's stellar supporting cast. While I feel like focusing solely on Piper for the hour worked beautifully, I know many people missed checking in with the rest of Litchfield. The Alice in Wonderland effect worked for me, but I understand how the tonal and format departure for the show was jarring for others.

"Mother's Day" marked the first time an OITNB premiere completely departed from its traditional, Piper-centric focus. Nearly every primary character was given time to shine in the hour which showcased mothers, daughters, and all the ways their relationships can shape who they each turn out to be. By not singling out Piper or any other character for that matter, "Mother's Day" acted as a reintroduction to Litchfield in the post-Vee era. Using the holiday to tie together its desperate parts, "Mother's Day" proved to be a thoughtful and insightful hour.

Whether it was Big Boo explaining to Pennsatucky that choosing not to be a mother was the most responsible thing she could have done, or Daya struggling to understand her own mother's brutal honesty, the hour was incredibly moving. It found its true power in Poussey, the one woman in Litchfield who would have given anything to see her mother, if only it were possible. The final scene of Poussey finding the Calvin and Hobbes comic lining the inside of the broken pinata, as if it were a message from her mother, will likely go down as one of OITNB's most memorable moments.

Season 3! "Mother's Day" is far more representative of the show OITNB is than its predecessors. While both of the first two seasons had incredible openers ("Thirsty Bird" is my personal favorite), neither of them showcased the entire population of Litchfield the way "Mother's Day" did. OITNB stopped being a one woman show after the pilot. Piper is part of the fabric of a much larger story, and "Mother's Day" weaved Piper's journey in with the journeys of all of the other wonderful, complex women who populate the prison.

For this reason, the Season 3 opener deserves the best premiere crown. It made me cry, it made me laugh, it made me feel like I was being welcomed home, and it managed to juxtapose itself against the first episode by having Alex and Piper switch roles. What a strong, powerful hour of television. I only hope the Season 4 opener can reach the same heights.