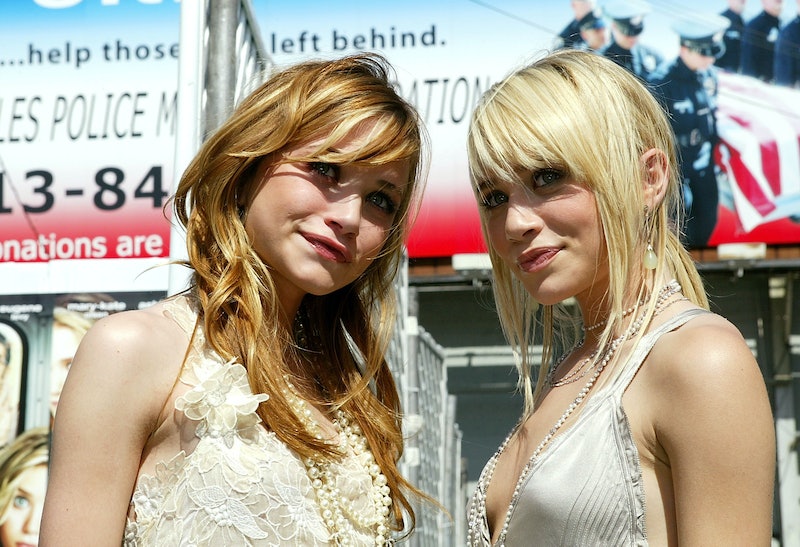 Mary-Kate and Ashley Olsen grew up before our eyes as Michelle Tanner on Full House, as well as so many twin-tastic movies (Winning London, Passport to Paris, New York Minute, among others). Flash forward to now — the Olsen twins just turned 29, which means they're on the verge of the big 3-0. And to commemorate the occasion, the Olsen twins held an Olsen Olympics party, complete with color-coded teams and games outside. Guests posted photos to Instagram of the weekend festivities and it looked so fun!

Team Ashley wore blue T-shirts, while Team Mary-Kate bonded with red T-shirts. According to People, several of the twins' friends took the roles of camp counselors to keep the order and Team Ashley won the overall competition, celebrating by shooting off fireworks. Sounds like such a blast for the duo! But I have to wonder what kind of games they played. There's no word on the details of the Olsen Olympic events, whether there were gold medals, what the points system was, and whether or not anyone got disqualified (just like the real Olympic games). According to the Instagram hashtag #olsenolympics, there are photos of a dunk tank and an obstacle course.

So I guess I'll just have to speculate as to what kind of fun games would included in the Olsen Olympics. Check 'em out below.

Who Can Sing 'Baby Beluga' The Best?

Just like in Full House. The prize can be the opportunity to replace the Olsens in the upcoming Netflix series Fuller House . Sorry, too soon?

Best 'You Got It, Dude' Impression

Because Michelle Tanner's catchphrase will live on in infamy, along with "Oh please," and "Duh."

The Olsen twins are the founders of the fashion brand The Row and recently won the 2015 CFDA Womenswear Designer of the Year award. So Mary-Kate and Ashley might consider having a little fashion competition — who can customize their blue or red T-shirt best with found objects?

One of the fun things about twin movies, like It Takes Two, is that one is always switching places with the other, and mischief ensues. What if there's an ongoing game in which during the day, guests are randomly prompted to switch teams (and shirts), so they won't know if they'll be on the winning team until the very end. Suspenseful!

And of course, there's the dunk tank. The taunts from the person in the tank, though, must be Uncle Joey quotes/voices from Full House .

Now this wouldn't be just any obstacle course. You'll have to simulate the Olsen twins' own life obstacles — needing to get Starbucks, fellow NYU students selling photos and stories about you, New York Minute not doing well at the box office, and getting lots of flack for not being in Fuller House .

Actually, that game doesn't sound fun at all. But hey, at least The Row is doing awesome. Happy birthday, Olsens!

More like this
Jake Daniels Just Became The UK’s First Active Football Player To Come Out As Gay Since 1990
By Sam Ramsden
What Is Jeanie Buss' Net Worth? The Lakers President Is Uber Rich
By Hugh McIntyre
Penn Badgley & Leighton Meester Met On A Horror Movie Set Before 'Gossip Girl'
By Jake Viswanath
UK Viewers Will Have To Wait To See Jessica Biel’s Killer Housewife Series
By Rachel Mantock
Get Even More From Bustle — Sign Up For The Newsletter