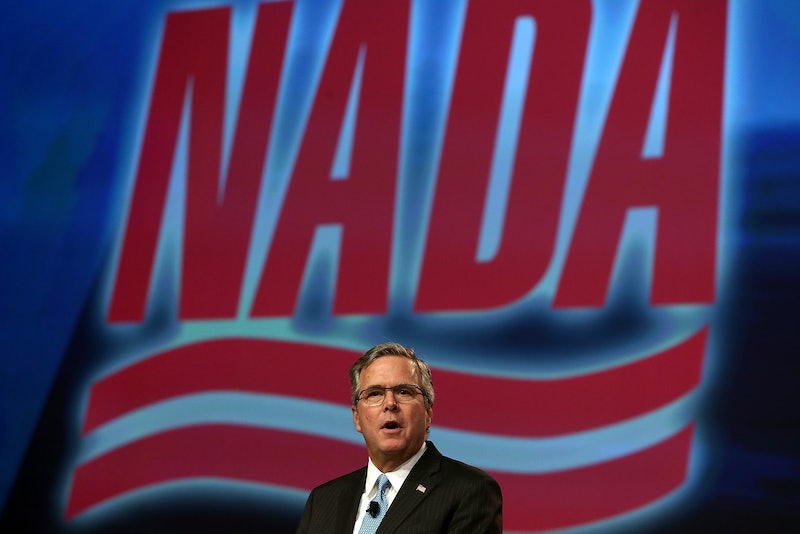 In the past, former Florida Gov. Jeb Bush, who announced his 2016 candidacy for president Tuesday, has called for "respect" for gay couples, according to the The New York Times. But his stance took a sharp turn for the more conservative in May when he did an interview with The Brody File on the Christian Broadcasting Network. Bush said his stance on gay marriage became one that did not support constitutional protection at all.

In the radio interview, Bush said his ideas came from the "core of the Catholic faith," which is centered around ideas about "a committed family life, [a] committed child-centered family system," according to Reuters. He said that the Supreme Court ruling on gay marriage in July shouldn't affect "stalwart supporters of traditional marriage." Bush also said that Christian business owners should be able to refuse to provide services to same-sex couples, "if it's based on a religious belief," because, though the U.S. is a "tolerant country," it should "be able to figure out the difference between discriminating against someone because of their sexual orientation and not forcing someone to participate in a wedding that they find goes against their moral beliefs." Bush told the Christian Broadcasting Network that he didn't understand why the push for marriage equality has picked up support so quickly, according to the Times:

I don’t (support it), but I’m not a lawyer, and clearly this has been accelerated at a warp pace. What’s interesting is four years ago, Barack Obama and Hillary Clinton had the same view that I just expressed to you. Thousands of years of culture and history is just being changed at warp speed. It’s hard to fathom why it is this way.

Bush also said he wasn't sure how the country would succeed without traditional marriages between men and women to create children, according to the Times. Strangely enough, his stance was much more conciliatory in January, when gay couples began to wed in Florida. He released a statement to the Times that described the issue as one that should be decided by states — a stance adopted by a few other 2016 GOP candidates:

We live in a democracy, and regardless of our disagreements, we have to respect the rule of law. I hope that we can show respect for the good people on all sides of the gay and lesbian marriage issue — including couples making lifetime commitments to each other who are seeking greater legal protections and those of us who believe marriage is a sacrament and want to safeguard religious liberty.

Bush also publicly supported a 2001 decision by a federal judge in Florida that upheld the state's ban on gay adults adopting, according to Politifact:

I think it's an issue that is marginal to the bigger issue, which is, how do we get children in loving homes?

In 1994, Bush said protections for LGBT people were comparable to "elevating sodomy," but his administration has since said that his views have changed, according to On The Issues. In the late '90s, he also said the gay rights movement and feminism were just "modern victims movements," according to On The Issues, and that sexual orientation should not be included in the definition of motivations for hate crimes.