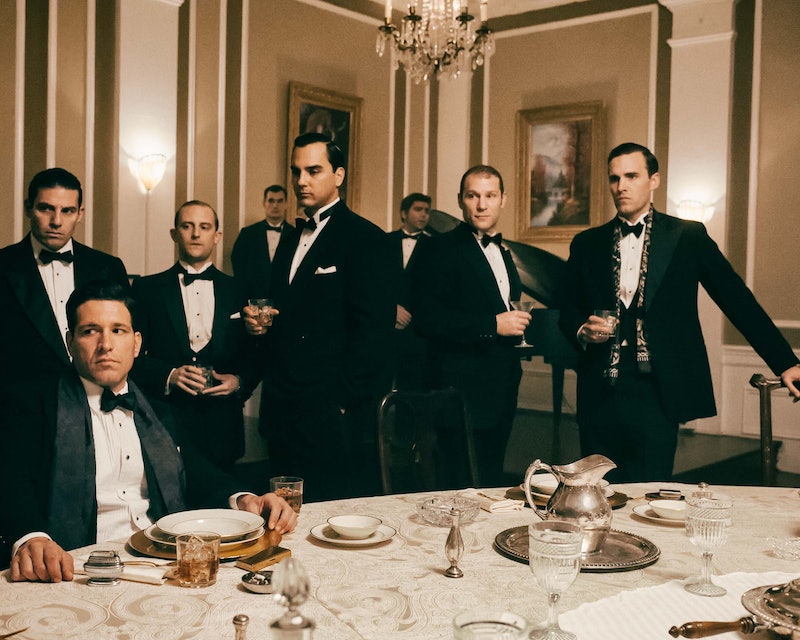 When it premieres on June 15, The Making of the Mob: New York will be a new kind of series for AMC. It's not exactly a documentary, and it's not exactly a narrative drama. Instead, the "docu-series" is a little of both. It traces the history of real-life alleged mobsters, like a documentary, but along with the talking heads, expert interviews, archival footage, and historical news accounts, actors reenact the story, too. It comes from executive producer Stephen David, who also did fact-based miniseries like The Men Who Built America and The World Wars. The Making of the Mob starts way back in 1905, so there's more than 100 years of mob history to cover. How long is that going to take? How many episodes of The Making of the Mob will AMC run?

It turns out, you can cover a lot of gangster ground in not that much time. The series is only going to be eight episodes. If you do the math evenly, and there's no guarantee the show will follow this pattern, that equals about 14 years per episode to get from 1905 to today. I'm sure some decades will be juicier than others and the show is going to focus on 50 of those years. Still, a decade and a half per episode wouldn't be too unreasonable. Here's what else to expect from these eight episodes.

It Follows People You've Heard Of Before

But They're Not The Only Big Names On The Show

The people interviewed on the show are no less famous than its subjects. The creators talk to former New York City Mayor Rudolph Giuliani, former Las Vegas mayor Oscar Goodman, singer Frankie Valli, and mob-movie actors like Chazz Palminteri and Joe Mantegna. Some of them have first-hand experience with real-life mobsters... and some played them in movies.

We'll See How The Mob Evolved

You might think the show will be an unending series of crimes and turf wars, but the mob really does experience an evolution over those 50 years. “Early on, it was brutal and street-gangish, but when they got into their later years, they were really running it as a business — they were involved in a lot of different places,” Jonathan C. Stewart, who plays Bugsy Siegal, alleged to Bedford and Bowery. “They were in Italy, Puerto Rico, and it was really a part of governance. Even when they were sent to jail, there were ways they could get out because they could help out the American Government with something in Italy, for example.”

It Anchors A Whole "Mob Night" On AMC

Even if you're not interested in the true story of the mob, you might be into gangster movies — they're some of the best movies ever, after all. Each week, AMC will lead up to each new episode with some of the best mob-related films, including Goodfellas, The Godfather, and Scarface. Mob fans, you're in for an embarrassment of riches.

It Hits Close To Home For One Star

This won't make it on screen, but Rich Graff, who plays Lucky Luciano, told Niagra Frontier Publications that he's had his own real-life mob ties. Growing up in Howard Beach, Queens, he says he was best friends with Peter Gotti. Peter is the son of John Gotti, aka "the Teflon Don," who was convicted of murder and racketeering in 1992, and died in prison in 2002.

"I was best friends with the [son] of what was considered the head of the mob, so I didn't have to prove myself to anyone," Graff said. "My upbringing from my parents taught me to stay away from that kind of lifestyle, because I saw firsthand — from a very early age — I had friends whose older brothers were there one day and gone the next. That was the accepted way of doing things. I learned from a very early age that you don't survive in that lifestyle." Instead, Graff can use his own experiences to bring even more authenticity to The Making of Mob.