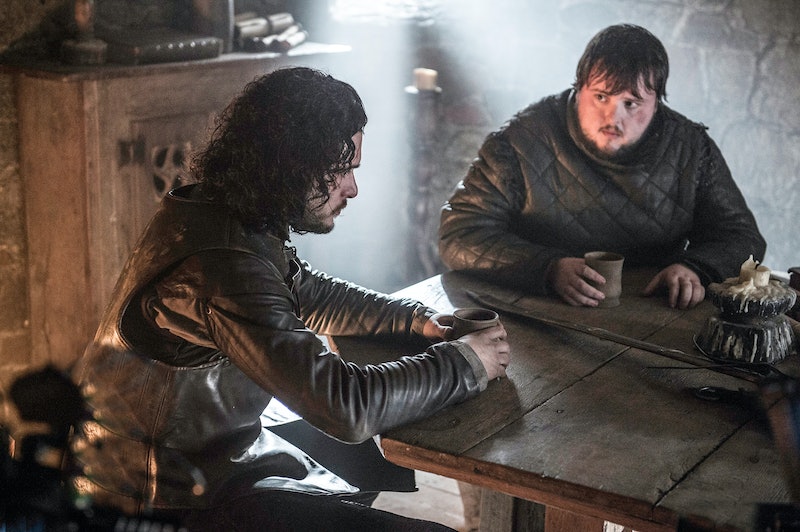 Sometimes you can see cliffhangers coming a mile away and they still give you all the feels. Even fans of George R. R. Martin's written word can't help you now. Jon Snow was stabbed on Game of Thrones. The Night's Watch trapped him and repeatedly stabbed him. Is he dead, like irreversibly? This is the end of his story in the published A Song Of Ice And Fire novels as well. We are literally all on the same page now when it comes to Jon Snow.

I love how Game of Thrones used the "previously on" scenes to fool us as well. They showed us clips of Jon Snow's Uncle Benjen Stark, who disappeared while on ranger duty. That way, when Jon's creepy squire Olly showed up bringing "news" of Benjen, a tiny part of me hoped that the vengeful kid was telling the truth. Alas, it was a trap that lead Jon Snow to a sign marked "traitor" (how mature) and a group of crows who took turns stabbing him while saying "for the Watch." I know Game of Thrones takes a lot of inspiration from the War of the Roses and medieval Europe, but this season's events have really had a Greek and Roman influence that cannot be denied.

Earlier in the episode, Jon Snow sent his BFF Sam off to become a maester. This is probably a good path for him and Gilly, but it left Jon Snow alone and friendless on the Wall. At least, so he thinks. Melisandre did seem to conveniently ride through the gates at the right time. It's almost like she knew something bad was going to happen. The Night's Watch may not be pleased with Snow's leadership — but that all may have been playing into Melisandre's plans to refill her stash of King's blood.

Speaking of dark magic, if Jon is dead I absolutely do not think he's going to stay that way. There are too many theories about him that require him to be breathing. His story's not over yet. To borrow from The Princess Bride, I think he's only mostly dead. While we didn't see Lady Stoneheart in the season finale, I don't think the fact that this scene lead directly from the big "Franken-Mountain" reveal is a coincidence. Cersei's bizarre pal in King's Landing isn't the only one with the power to raise the dead.