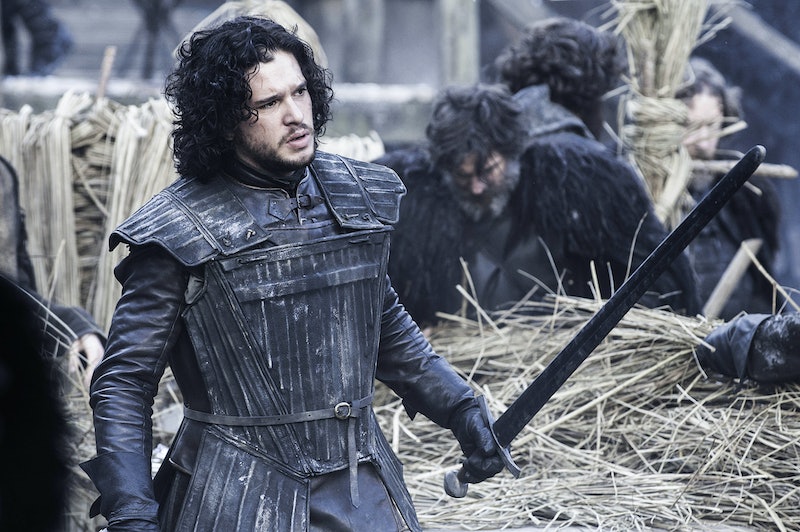 As I'm sure most of us know (because we're totally counting down the hours until Sunday) the Season 5 finale of HBO's Game of Thrones is quickly approaching. Though I'm excited as can be to see what happens in the sure-to-be explosive episodes, I'm not sure that I've prepared myself for what could plot twists could possibly occur. After all, after last week's episode, "The Dance of Dragons," everyone's fate is up in the air. Showrunners David Benioff and D.B Weiss have jumped slightly off book, and they've made it clear that we're but peasants who are only at the will and mercy of their narrative. The finale episode of this season is titled "Mother's Mercy," which we can probably assume has a great deal to do with Cersei Lannister's fate. However, considering this season has also heavily featured Jon Snow, I'm pretty certain that something big is going to be happening to the Lord Commander of the Night's Watch in the Season 5 finale. But, will that big thing be the unthinkable? In other words: Will Game Of Thrones kill off Jon Snow in the Season 5 finale?

During last week's episode, Jon Snow returned to The Wall with a group of Wildlings after being brutally attacked by White Walkers and their army of the dead at Hardhome. His Night's Watch brothers were not pleased about his impending alliance with the Wildlings when Snow left for Hardhome, and they looked even less pleased to see him return with a group of them (and a Giant) in tow. For a while, I even thought First Ranger Alliser Thorne wasn't going to open the gate to let them in.

If you've read George R. R. Martin's books, you know that the brothers of the Night's Watch stab Jon repeatedly after he asks them to join forces with the Wildlings and fight. Whether or not Jon survives the attack is to be determined — so yes, technically, it's possible Jon's fate in both the show and the books is death.

Still, Jon Snow's death in the television series would literally be too much for me to bear. His presence in Game of Thrones is extremely important. However, considering GoT is a show that has proven itself merciless with character deaths, so we should probably all brace ourselves. Plus, Kit Harington, who plays Jon, chatted with MTV News about Season 5's finale, and his words weren't really comforting:

"'The Dance of Dragons' and the season finale 'Mother's Mercy,' are going to make 'Hardhome' seem like "Dr. Quinn, Medicine Woman" in comparison."

If the infamous R + L = J theory is to be believed, Jon Snow sort of sits at center of George R. R. Martin's entire saga. If, as the theory states, Jon is in fact the son of Lyanna Stark (Ned Stark's sister) and Rhaegar Targaryen, he would be the embodiment of the "song of ice and fire" — which just so happens to be what Martin's novel series is titled. This would mean that he is the one who should truly be sitting on the Iron Throne, and leading the Seven Kingdoms.

2. From Bastard To Lord Commander

Jon has come too far to just up and die. During first season of Game of Thrones, he was simply introduced as the bastard son of Ned Stark, who was sent off to join the Night's Watch because he could have no title or claim of property. However, in spite of all this, Jon has showed outstanding leadership and battle skills over the course of GoT's five seasons — and he is now Lord Commander of the Night's Watch. Surely, David Benioff and D.B Weiss didn't lead him this far for no reason!

3. He's Come Close To Death Before And Survived

We all know that Bran Stark, Jon's younger brother, is a Warg — meaning, he has the ability to enter the minds of animals and see through their eyes. In fact, the Starks are known for having Warg powers in general — so, if the Night's Watch does in fact attack Jon in the GoT Season 5 finale, he may survive if he is able use his Warg powers to enter the mind of his direwolf Ghost before his body gives out.

5. He May Become A White Walker

There is a reason why Jon Snow met the Night's King, aka Coldemort, at Hardhome. Though a few have seen them — including Jon's BFF Sam Tarly — people have always assumed the White Walkers were myths. It's no coincidence that Jon came face to face with their leader.

6. Jon Hasn't Found Out About His True Parentage

For his entire life, Jon has been desperate to know about his mother. Though his father Ned never spoke of her, he promised Jon that they would discuss her the next time they were together. Unfortunately, that time never came, because Ned was beheaded before they were able to have that talk. Jon cannot go to his grave without knowing the truth.

Stannis Baratheon lent his ships to Jon and the Night's Watch in hopes that the brothers in black and the Wildlings would join him in his fight for the Iron Throne. Stannis is currently headed to Winterfell to attack the Boltons — so, Jon must survive if only to get his sister Sansa away from her horrifically cruel husband, Ramsay Bolton.

So, what will happen during the Game Of Thrones Season 5 finale? We'll find out when the episode airs this Sunday on HBO.