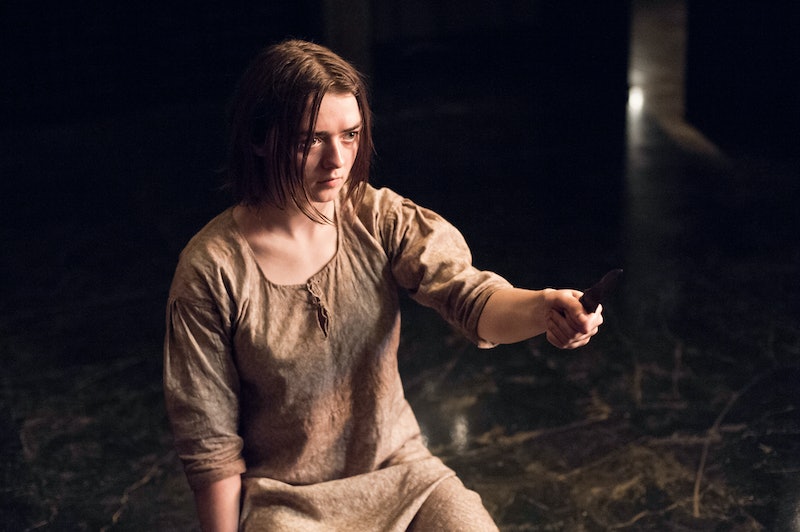 If you are the sort of Game of Thrones fan who can find yourself referring to Melisandre as "Stannis' witch friend" and Gilly as "that girl Sam likes," you probably didn't remember the face of one Meryn Trant, the man who Arya killed on Game of Thrones during the Season 5 finale. And it couldn't have come at a better time. Now, I'm not someone who tends to cheer on violence like a sport, but after all the violence against women this season, having Arya stop Meryn's sadistic, sexual game with two young sex workers and Arya in disguise was a pretty cathartic moment.

After having to listen to Sansa's rape (and see it through Theon's eyes), watching as Gilly rewarded Sam for saving her from rape by giving him sex, and knowing that we're inching closer to Cersei's nude walk of shame, it's really started to appear that Game of Thrones relies far too heavily sexual assault as a plot device. When Meryn — who was once part of the King's Guard and who was the person to kill Arya's sword-fighting coach Syrio Forel, this earning a spot on her death list — cropped up in this episode, not only taking young sex workers into his charge, but actively hurting them and torturing them, I almost threw my hands up and turned off the television. At about the moment when I was going to do that, however, Arya appeared and took down the bastard, crossing off a name on her murder list in a big way.

First, she tortured him a bit, blinded him and gagged him. But this was just so she could keep him alive long enough to make sure he knew who she was. Then she killed him and returned back to the faceless men.

Look, Arya finally getting her revenge — and on a man who, technically is supposed to be with Cersei at this moment in the books — does not undo the heavy reliance on sexual aggression towards women on this show. But at least, for once, the end result of yet another difficult to watch scene ended in a moment of total agency.

It's not everything, but it's certainly something.