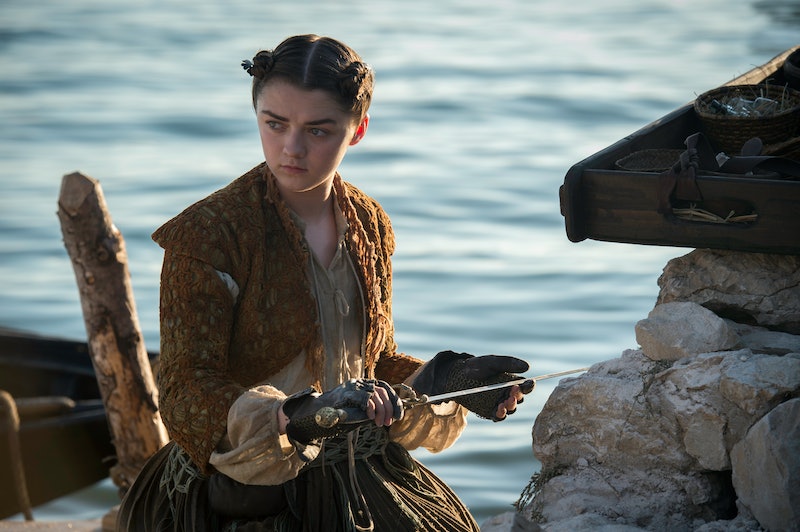 Someone got sent to the principal's office on Game of Thrones. I didn't think that Arya Stark's story in Bravos could get any weirder, however, the turn of events from the most recent episode brought about one major event from the books — Arya went blind on Game of Thrones after knocking a name off of her list. According to a panel the cast did, Maisie Williams didn't know that this was going to happen to her character until some avid fans mentioned it to her. "People would come up and be like Arya goes blind," she said, adding that she would just play along as if she knew. If you're worried about Arya, know that Williams is, too. "I don't know how Arya's gonna do without her eyes in the new season," the actor said.

First of all, I knew the second that little girl came into the House and died that Arya was going to take her pint-sized face. Still, she should have known that there would be consequences. The way Arya murdered Meryn Trant was brutal, and showed how much she's changed since he last saw the youngest Stark girl. However, this isn't someone that the Many-Faced God wanted to kill. It's someone Arya Stark wanted to kill. Not only that, but she used her new faith's "you are no one" speech while she was making this rogue kill — I don't know much about this religion, but I'm sure that's not polite.

Before Jaqen H'gar took Arya's vision, however, he made it seem as though he was taking his own life to punish her. Arya was devastated, and rightfully so after having lost so many father figures (as well as her mother) in the last couple of years. Then it got weird. Jaqen wasn't dead. At least, I don't think he was dead. He took the form of her fellow female classmate. Then Arya started flipping through the faces of the dead body on the ground like an anthropomorphized Tinder (sorry) until she came upon her own face. It was then that her vision started to blur.

I'm a bit confused about how the faceless assassins keep up their body count if they're so casual about it. That said, it's likely that Arya's blindness is a temporary affliction. Sure, Arya becomes Daredevil for a little while but after doing her time does ultimately regain her vision in the A Song of Ice And Fire books.

More like this
10 Must-Read New Books Out This Week
By K.W. Colyard
'Derry Girls’ Dylan Llewellyn Will Star In C4’s New Queer Comedy
By Rachel Mantock
'Games of Thrones' Fans May Recognise This 'Conversations With Friends' Location
By El Hunt
Fans Of 'Anne With An E' Will Recognise 'Stranger Things’ Vickie Immediately
By Rachel Mantock
Get Even More From Bustle — Sign Up For The Newsletter