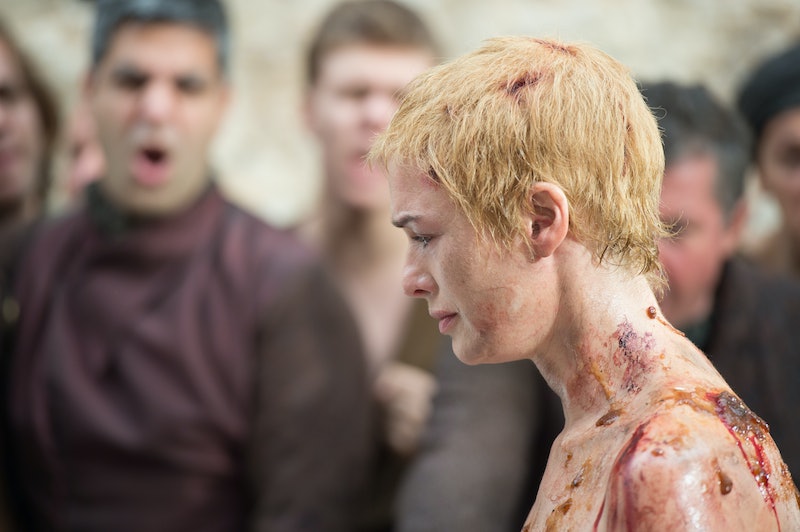 Cersei Lannister is, by no means, a good person. She has done horrible things her whole life and has generally been a despicable human being. But not human deserves what she just went through on Game of Thrones. Cersei's naked walk of shame finally happened and it the single worst thing I can remember seeing on this show. Now, I understand that this happened in the books. I understand that the show is just following the books. But did we need to be treated to that onslaught of visual and aural pain? Did we need to watch as men waved their penises at Cersei, demanded blow jobs, called her "c**t" and "slut," and hurled all manner of excrement at her? Did the scene need to be that long?

Well, to be frank: No, it didn't. I sort of wish I could have waved a magic wand and made it go away so that it didn't happen at all. But that's not how this show works and if I couldn't stop the Night's Watch from stabbing Jon Snow over and over again during the season finale, I certainly can't stop the showrunners from delivering Cersei's lowest moment ever.

But on an episode that packed so much punch that I'm about to watch it two more times just so I can make sure I caught everything, I don't think five entire minutes of shame-walking was necessary. How many times have we seen women degraded on this show... this season? And we put up with it, because we're attached to the characters and the universe they live in. We hang on the promise that women will make power moves that will hopefully wash the bad taste out of our mouths. Terrible things happen to men, so some of us hang onto the "sickeningly terrible stuff happens to men and women" defense.

But when the series basically takes a scene like Cersei's and seems to fetishize her pain by letting it drag on and on and on and on, I have to ask: Why? What real purpose did this super sized travesty serve? Because I was feeling pretty sorry for Cersei the moment she got on those steps. I really didn't need the series to fill in the rest of the blank for me to have empathy for this fully formed woman about to embark on the worst walk of her life.

I won't say I'm done with the series, because I know myself too well, and curiosity will get the best of me. But I am disappointed. And I doubt I will look at the show the same way ever again.