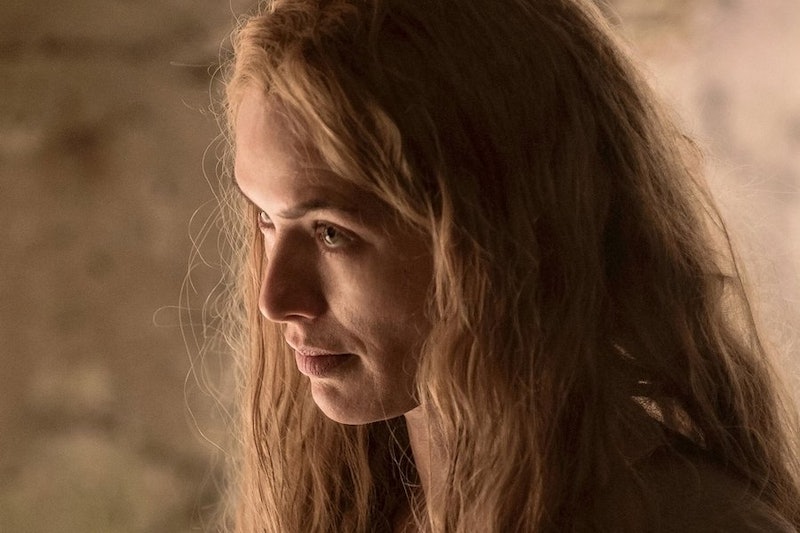 Game of Thrones Season 5 has been a crazy, infuriating, and, at times, masterful ride. This Sunday, the season comes to an end, but, before it reaches the finish line, it has to tackle one of the books most harrowing scenes: Cersei's walk of atonement. In A Dance with Dragons, Cersei's brutal walk through King's Landing as she makes her way back to the Red Keep is one of the series most difficult passages to get through. It takes Cersei, a character who has always been so good at playing the game, and literally strips her bare for all the world to see.

She is shorn from head to toe and forced to walk through the streets completely nude while the Septas call her a sinner and a fornicator, and generally verbally shame her. Whether you are a Cersei fan or not, her long walk will leave you infuriated. Can Game of Thrones pull off the emotion and brutality of the scene without it feeling exploitative? Translating key moments involving the female characters for the screen has never been Game of Thrones strong-suit. From this season's violation of Sansa, to the controversial Jaime/Cersei scene in Season 4, and Dany's wedding night in the pilot, Game of Thrones has quite a few missteps in its past, but this scene does not have to be one of them.

Cersei's walk of atonement is meant to make you angry and frustrated by the double standards of the patriarchal world of Westeros (as well as reflect the double standards women face today when it comes to expressing sexuality). Certain parts of the scene will, out of necessity, have to be changed for the screen. Let's take a look at the key components of Cersei's walk, and how Game of Thrones might play this iconic moment. Please note, here be spoilers.

Losing Cersei's inner thoughts is going to be a huge blow. Because the scene is told from her point of view, the reader becomes her companion rather than a spectator. The rich material contained in her thoughts will be lost for the television viewer, but Lena Headey's strength as an actress should carry the scene, especially if the show chooses to focus most of the camera's attention on her face and her body language, rather than on her nudity. I hope they manage to have Cersei verbalize this one internal line though: "I am a lioness, I will not cringe for them."

2. The Ghosts in the Crowd

For fiscal reasons, getting actors like Sean Bean and Jack Gleeson back to stand in the crowd is not possible. During Cersei's walk, she imagines she sees everyone from Tyrion to Ned in the crowd. The faces of the dead and the living seem to haunt her. Visually, this could be hard to play on screen, unless the nightmarish, feverish quality of the scene is played up. Doppelgängers could be used (after all, none of the characters are really there), or Game of Thrones could simply have Cersei catch a glimpse of the fortune teller who she met as a child instead, since the unfolding of the prophecy is a huge part of the scene.

In the book, the injustice of what is happening to Cersei rings through loud and clear. Yes, she is a character who has done villainous things (more so in the books than on the show), but the audience should not feel like Cersei is "getting what she deserves." Game of Thrones has a chance to play up the subtext of the scene in a major way. More than anything, Cersei's walk is about her sexual conduct, and the idea that she deserves to be punished and trotted out in front of the city to be ridiculed because of who she has sex with. By emphasizing the crowd's schadenfreude, they can drive home just how despicable The Faith is.

When her own husband, the king, had countless mistresses, and no one said a word, the double standard is glaring. This scene is supposed to tick you off. It displays gender, religious, and general narrow-mindedness in all of its ugliness. Game of Thrones has to be very careful to make sure viewers take no joy from seeing Cersei trotted out in front of a bloodthirsty mob— no matter what she has done in the past.

4. Keep Jaime Out of the Picture

It is crucial that Jaime not make it back from Dorne in time to ride to his sister's rescue. Cersei wants nothing more than for Jaime to come and save her in the books, but he is leagues away with no idea what is happening. If he were to show up, it would undermine Cersei's entire journey. Even she acknowledges her walk is something she must face alone.

Here is one area where the show can trump the book. When Cersei makes it back to the Keep, she has a champion waiting for her. Because emotions are running so high for the reader, it is easy to miss the identity of this giant man who cannot speak. However, because TV is a visual medium, the identity of Cersei's champion will be instantly revealed, and it is going to be awesome. It is a reminder that, even though Cersei has been humiliated, she is still playing the game, and she is going to be back with a vengeance next season. Westeros must beware.