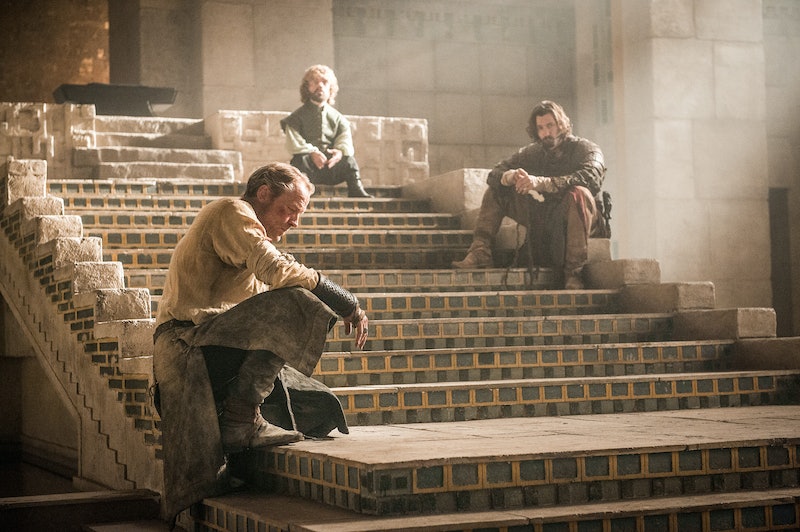 If there's one thing that we might be able to hang our hats on from the Game Of Thrones Season 5 finale, it's the hope that Daario Naharis will find Daenerys after Drogon flew her away from Meereen. We now know that Dany has been surrounded by an army — for those who have read the books, we know them as the Horse-Lords — and dropped her wedding ring in the grass to possibly hide her marriage, but we don't yet know what this army will do to Dany now that she's been discovered. Plus, Drogon refused to fly Dany back to their home in Meereen, so what does that mean for their relationship and their future? This is where Daario comes in, but his journey to find Dany along with Jorah is going to be riddled with problems.

Daario left Tyrion, Missandei, and Greyworm to look over the Queen's reign and to quell any problems the citizens of Meereen might have about their missing Queen, so he could go off to find his love. And, obviously, Jorah tagged along as well because he is forever trying to find a way to get Dany to forgive him. But, Daario has enemies, Jorah has enemies, and even more pressingly, Dany has enemies. Going on a journey to find her could bring her enemies out of the woodwork both in Meereen and on Daario's journey.

But, considering how epically awesome and dedicated both Daario and Jorah are to their Queen (since they're both in love with her), they likely won't let anything or anyone get in their way when it comes to finding her and protecting her. (Although, to be fair, Dany is pretty capable of saving and protecting herself.) In the end, Daario has to prevail. I refuse to be believe he won't. We'll have to see how dangerous the process will be and whether or not he or Jorah will have to sacrifice themselves to make sure Dany is safe for good next season. But their epic love needs to conquer all, and if Daario can save Dany, perhaps we could see a rekindling of their romance. If nothing else, Game of Thrones owes us another shot of Michiel Huisman's butt onscreen. It's the least they can do.