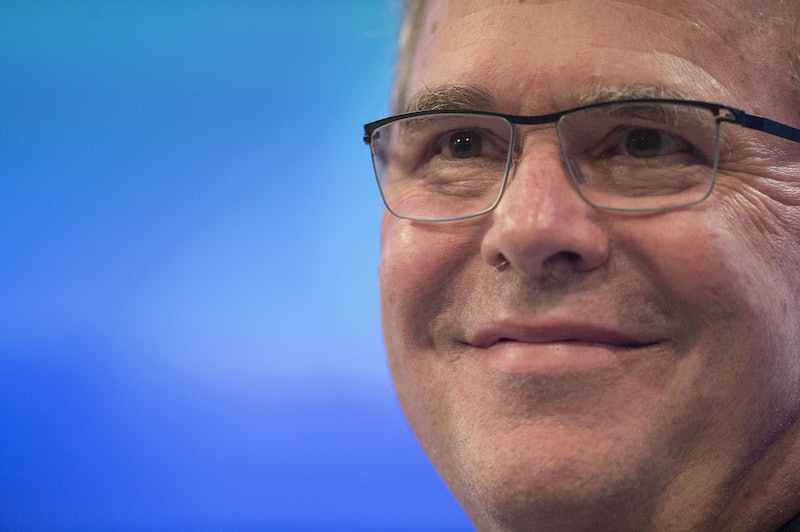 Former Florida Gov. Jeb Bush is expected to formally launch his presidential campaign on Monday, adding his name to a crowded field of Republican nominees. As Bush works to differentiate himself from the rest of the GOP nominees, his record on social issues will certainly come into play. Last week, a Bush spokesperson told the Huffington Post that Jeb Bush's stance on abortion is that it should only be an option in cases of incest, rape, or threat to the mother’s life.

As governor of Florida, Bush fought to restrict even that basic access. Not only is Bush pro-life, when in office, he described himself to the Associated Press as "the most pro-life governor in modern times." According to non-partisan voter information clearinghouse OnTheIssues.org, during his first year in office Bush supported legislation for a "Choose Life" license plate, with proceeds going toward counseling for pregnant women considering adoption but not toward any agency offering abortion counseling.

In 2003, Bush tried unsuccessfully to get the Florida courts to appoint a guardian for the fetus of a 22-year old mentally-disabled woman who had been raped while in a state facility. CNN reported that the young woman, who suffered from cerebral palsy and autism, had been attacked by an operator of the facility.

Two years later, Bush attempted to stop a 13-year old in state custody from obtaining an abortion. According to The New York Times, the governor relented after a judge ruled that the girl was competent and able to make her own decisions. New York Times reporter Abby Goodnough quoted the then-governor as saying:

It's a tragedy that a 13-year old child would be in a vulnerable position where she could be made pregnant, and it’s a tragedy her baby will be lost. There’s no good news in this at all.

Jeb Bush's absolute view on the sanctity of life helped to place him at the forefront of the debate over the fate of Terri Schiavo, a mentally-impaired Florida woman in a "persistent vegetative state." CNN reported then-governor Bush offered unprecedented support to Schiavo’s parents as they lobbied the courts and the Florida legislature to prevent Schiavo’s husband from ending her life.

Bush left the governor’s office in 2007, but his social conservatism and right-to-life stance appears unchanged as he turns his focus towards the presidency. This past January, Politico reported that Bush joined Republican hopefuls Marco Rubio, Ted Cruz, Mike Pence, Bobby Jindal, Rick Santorum, and Mike Huckabee in a GOP push for a federal ban on abortions past the 20-week mark.

With 10 declared Republican presidential nominees (and more on the way), Bush will have to work hard to break away from the pack. That means he could use his bona fides as a socially-conservative governor to try to bring more of the GOP base to his side. If he manages to win the nomination and the race for president, that same voting and activist record almost guarantees that Roe v. Wade — and basic, legal access to abortion — would be put in jeopardy.