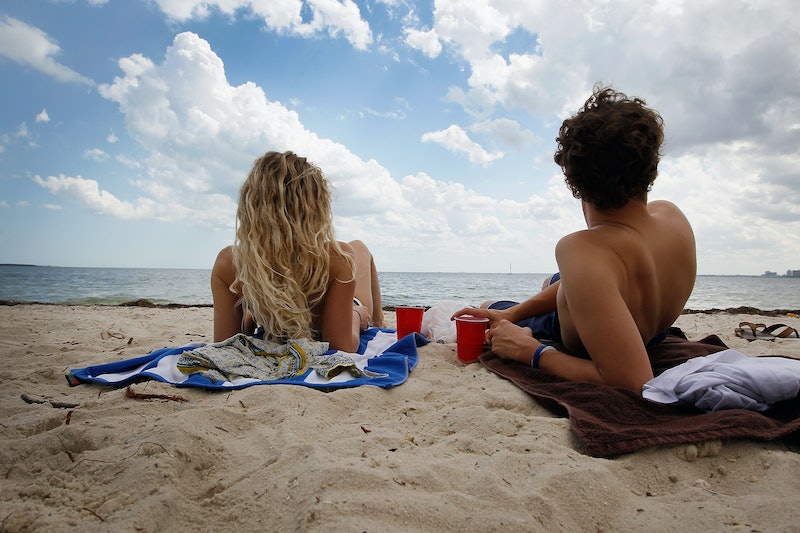 If you're gearing up for a Florida vacation this summer, you may want to plan some activities away from the beach. The Centers for Disease Control and Prevention and Florida Department of Health are warning Florida beachgoers of a potentially deadly bacteria highly prevalent in marine waters during the summer months. Between this and reoccurring shark attacks, it's probably best to just sunbathe on your back porch this summer.

OK, so it's not entirely unsafe to swim in the Florida waters — in fact, the state's health department actively encourages families and friends to visit the Sunshine State's 1,200-mile coastline. But when you do, state and federal health officials want you to proceed with caution, because there is a "minimal" risk of contracting the potentially fatal bacteria Vibrio vulnificus. The bacteria tends to strike between May and October, and those swimmers with open wounds and weakened immune systems from preexisting health conditions are most susceptible to becoming gravely ill.

"The bacterium does not pose a risk to a normally healthy person (who does not have open cuts or wounds) who swims in Florida's coastal waters," Florida health officials said in a recent statement. "Florida's beaches and water are safe to enjoy responsibly — risk of infection is minimal if you take proper precautions."

Despite dozens of erroneous media reports, Vibrio is not a flesh-eating bacteria, the Florida Dept. of Health said on Friday. "This week, several media outlets published stories that contained inaccuracies about the safety of Florida's beach water related to cases of Vibrio vulnificus infections," the department said in a statement.

The public frenzy surrounding the so-called flesh-eating bacteria most likely escalated when the Florida Dept. of Health released an official warning on May 29, reminding local beachgoers and tourists alike of the dangers of swimming in the salt waters off the Florida coast with open wounds. The May news release also announced the launch of an online resource page complete with Vibrio facts and safety tips on how to avoid contracting the deadly bacteria.

"Vibrio vulnificus is a naturally occurring bacteria in warm, brackish seawater," the Florida Dept. of Health states on its website. "Water and wounds do not mix. Do not enter the water if you have fresh cuts or scrapes."

Health officials in Florida are now looking to quell the bacteria hysteria. Florida health officials emphasized that while Vibrio infections can be quite dangerous, they are also very rare.

According to the Florida and CDC officials, Vibrio infections can also occur after eating raw or undercooked fish, such as shellfish. The state's health department advises residents and tourists to make sure their shellfish is thoroughly cooked before eating.

Bottom line: Heed this health advice before jumping into the Miami waves, but don't sit inside all summer long (unless you want to, of course).

More like this
Zosia Mamet Opens Up About Her Eating Disorder
By Zosia Mamet
An Honest Review Of The TikTok-Famous WalkingPad
By Kaitlyn Wylde
Plan C Vs. Plan B: What's The Difference?
By Lexi Inks
11 Benefits Of Cross-Training
By Carolyn Steber
Get Even More From Bustle — Sign Up For The Newsletter