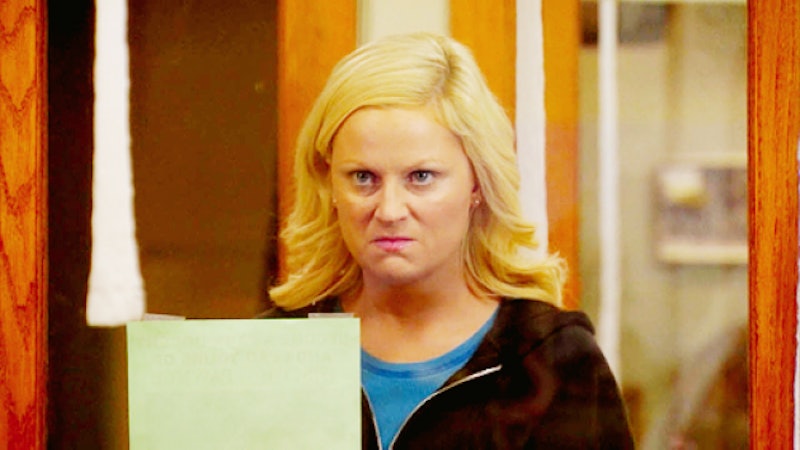 I tend to be optimistic about Pixar creations, and the company's latest venture, Inside Out starring Amy Poeher (and some other randos) is already making the right moves by having Poehler voice Joy... yes, literal joy. The film follows an 11-year-old girl named Riley, whose emotions go to war when she's uprooted from her Midwestern town and forced to move to San Francisco. And that's not a metaphor: the actual embodiments of Joy and Sadness (who is appropriately voiced by Phyllis from The Office, btw) fight for control of this kid's mind, while Fear, Anger and Disgust slip into the forefront. So, not only is this not your average children's film, but envisioning those colorful characters makes me consider what another Midwesterner's emotions would look like. That's right, I'm talking about Leslie Knope.

Though typically fueled by bubbling, bright-eyed optimism, we know that Leslie had her ups and downs over the course of Parks and Recreation. That whole losing her spot on the Pawnee city council thing? Not a high point. And her expressiveness, a perfect counter to Ron and April's constant non-expressiveness, was always a joy to behold. (Do you get it? Because she's playing a character named joy?)

Anyway, I'm guessing that Leslie's emotional personas would look a lot like the following gifs.

Leslie's version of Joy would be gifted with her constant need to keep moving and to always be the best version of herself. Therefore, "dancing badly" seems like seems like an accurate character trait. This Leslie would come out to play whenever Monday morning holds the promise of a challenging new project and a plate of waffles.

After falling into grinning Denial (the version of Leslie that can laugh about a dead dream), Leslie would turn to Sadness. Such a feel would be brought upon by the betrayal of a close friend, or a wistful mention of Lil' Sebastian (gone too soon).

This. Face. The scrunched up, nostril-flaring expression of fury, THAT'S what defines Leslie's embodiment of Anger. It's a persona expectedly stubborn and unexpectedly aggressive, and you'll bet that, when that peach-eating SOB Greg Pikitis rears his ugly head, this is the face he will meet.

"You ordered a Caeser Salad for lunch? What are you, a monster?" Cue Leslie's inner Disgust, who has zero tolerance for Jean-Ralphio, Men's Rights Activists, and anything that shows up in her plate green and leafy.

... but yeah, no, you'd see the above expression on her Fear emoti-person, particular when confronted with the possibility of a monumental professional failure, or (heaven forbid) a Tammy. One OR Two. Am I the only one who is now officially wishing for a Parks and Rec post-script special based on Inside Out? Just me? OK, bye.