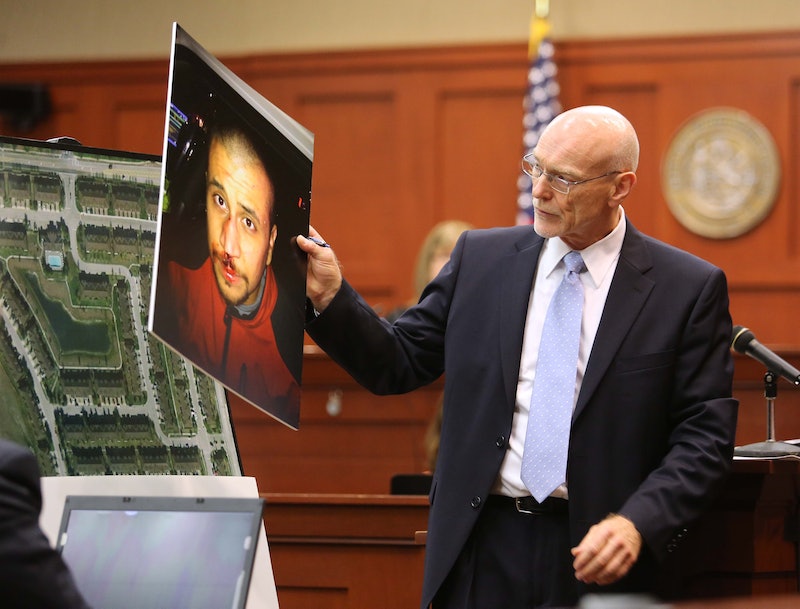 On Monday, George Zimmerman's second-degree murder trial kicked off. First, defense and prosecution presented their cases to judge and jury in dramatic opening speeches; then, as per normal criminal trials, the prosecution began calling on some of their 130 potential witnesses. So far, these have included the 7-11 clerk who served the 17-year-old Trayvon Martin just before the shooting; the 911 dispatcher who spoke to Zimmerman when he dialed; the friend who'd asked Martin to grab him Skittles; and the community's Neighborhood Watch leader. Here's what you should know about the trial so far:

1. The prosecution may be establishing a "good versus evil" theme.

The dichotomy of good versus evil being imposed on public events is nothing new: think about how many people have labeled Edward Snowden "hero" or "villain". In the prosecution's narrative, Zimmerman seems to have been virtually waiting for someone to target—and Martin was the innocent victim.

"Good morning," Lead Prosecutor John Guy said, introducing himself to the jury. "Fucking punks, these assholes all get away." Pause. "These were the words in this [pointing to Zimmerman] grown man's mouth as he followed this boy that he didn't know." The 17-year-old Trayvon Martin, continued Guy, was chatting to his girlfriend on his cell phone as he walked home, "armed" only with a fruit drink and a bag of candy.

It doesn't seem to have escaped the defense's attention that the jurors are all female, and he directed his final, emotional punch at them. "By the end of this trial, you will know in your head, in your heart, in your stomach" (you catch that emphasis on gut feelings?) "that George Zimmerman did not shoot Trayvon Martin because he had to. He shot him for the worst of all reasons: because he wanted to."

2. By contrast, the defense is attempting to look at both the defendant and deceased in a humane way.

It's the job of the defense to shoot holes in the prosecution's rhetoric, which in this case means telling the jury that neither man was hero, nor villain. "The evidence," Defense Attorney Don West began, "will show that this is a sad case. No monsters here."

The defense has already deliberately released photos of Martin that imply the 17-year-old dabbled in drugs, got into fights with other teenagers, and was kicked out of his mother's home. "I never said he was perfect," Martin's mother told the Washington Post. The defense won't try to suggest that Martin's death was justified by his behavior, but that the boy was more complicated than his martyrdom makes him out to be—and that, by extension, so is the case.

3. The defense also made a knock-knock joke.

Attorney Don West already stumbled when he made a joke to the jury early in his remarks. ”Knock knock. Who’s there? George Zimmerman. George Zimmerman who? All right, good. You’re on the jury.” The joke was a reference to the jury selection process, but West later apologized, promising he wouldn’t make any more jokes. Uh, good call.

4. Zimmerman is trying to appear neutral.

Even at the pretrial hearings, Zimmerman said next to nothing, aside from "yes" and "no." Reports claim that the defendant, wearing a dark suit and grey tie, has been maintaining a neutral expression as the trial plays out in front of him. At times, said the New Yorker, Zimmerman seemed close to falling asleep—"on a day in which any defendant could reasonably be expected to be suffering the effects of a sleepless night."

When played the 911 tape recording from the night of the shooting, in which a scream and a shot are heard, Zimmerman still showed no emotion. (Martin's mother rose and left the courtroom.)

5. The prosecution is emphasizing Zimmerman's record of calling authorities to report 'suspicious behavior.'

Zimmerman's attitude towards combating crime has been described as "overzealous," and his defense team is fighting to keep the opposition from playing calls from Zimmerman to authorities. It emerged Tuesday that over an eight-year period, Zimmerman contacted police close to 50 times to report slow vehicles, open garbage, and loitering strangers. (Four were about black men he witnessed in the neighborhood.)

Sanford's Neighborhood Watch coordinator, Wendy Dorival, testified that she had felt Zimmerman was eager to combat the rise of break-ins in his community—but posed no threat himself. "They're not supposed to take matters into their own hands," Dorival noted. 911 dispatcher Sean Noffke also testified Tuesday that he told Zimmerman he did not need to follow Martin—but that Zimmerman did not seem hostile, and said the call appeared "routine."