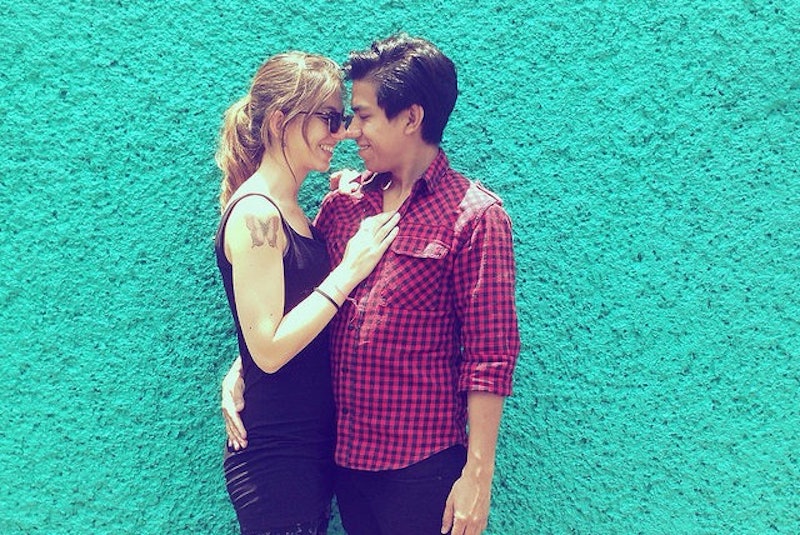 A new survey of over 2,000 female participants between the ages of 18 and 40 by pharmaceutical company Merck found that less than 1 in 10 women make the first move. Less than one in 10. That's pretty shocking, but in a way I get it. I totally used to be like that. I would say for the first 10 years of my dating career I never made the first move (I say career because there's not really a word for the drunk baby ice skating I actually look like while dating). In fact it was sort of a rule— I was shamelessly, enthusiastically flirty (or at least I was in my head), but would never actually go for it. Why? With the huge success of Bumble, a Tinder-like dating app where women have to message their match first, aren't we at a point where more women should be comfortable making the first move?

Well, as Sean Donnelly wrote in Elite Daily: "Maybe you stick to the old-fashioned route; maybe you are scared of rejection; maybe you simply do not know how to approach a man. Welcome to a man’s world. We, too, hate rejection and embarrassment, and some of us have no clue how to approach women."

Now, I'm not wild with saying "welcome to man's world", implying god, it's so hard to be a man and have everyone take what you say seriously and let you take up as much physical and emotional space as you want in this world all the time. But I give them the dating thing. It's unfair that in the old-fashioned (and still too current) hetero dating world it's all on them to take the initiative. It's time, for them and for us, that we take a turn. Here are eight reasons why you should make the first move, ladies:

Like I said, it's time. There's no reason to think men would have a better handle on it than we do, and it takes a lot of guts, so they shouldn't be constantly having to be putting themselves out there. One study of 87 heterosexual students in 2011 by Dr Michael Mills found that "more men preferred to be asked out (16 percent) than there were women who preferred to do the asking (6 percent). That difference suggests that 10 percent of men may be waiting quite a while for a woman to ask them out on a first date". Let's help these dudes out!

It's not all about him — it'll make you feel great as well. Just like any goal, or anything out of your comfort zone, it's great to say "I want this" and go for it. Even if it doesn't work out you'll feel proud of yourself, independent and fierce. Go for it.

Having the confidence to go up and make a move is such an attractive quality — and experts will be the first ones to tell you that. It's not arrogant, it's a self-assuredness. "Women with confidence don’t seek approval, or need any extra attention from others. Confidence doesn’t just manifest from nowhere, either; people with confidence also possess a sense of self — moreover, one that they take pride in." It's really hot.

Asking someone out, or purposefully flirting, is inherently flattering— without have to lay on cheesy compliments. When you show someone you're interested in them (as long as they're not massively bigheaded already) it's going to warm you to them. Boys need compliments too. And chances are they'll like you for it.

5. It could help your sex life

A University of California San Francisco conducted by Shari Dworkin study found that only 25 percent of women aged 18 to 24 made the first move but "72 percent of men are as sick of the status quo as a lot of women are and would love women to be the first to initiate sex", according to expert Tracey Cox. Get used to asking a guy out for coffee and it may boost your confidence to go for more!

6. You'll be helping rewrite the rules

This is the big one for me. So many of the dating dynamics we have are rooted in very, very sexist gender roles. Don't think of it as innocuous or old fashioned if you wait for a guy to ask you out— you need to remember it's a throwback to when sexism was even more extreme and accepted. The only way to get rid of it is to ignore it, and every time you break traditional gender roles you're helping.

7. It's so much better than waiting for life to happen to you

I can be as guilty of this as anyone. My flatmate and I are constantly encouraging each other to be more assertive or proactive ("BE SASSY!" is our favorite current refrain). It's so easy to sit around and wait for something to happen, but it's also boring. If you want to go and do something, do it— and that includes dating. Relationship expert Dr Christie Hartman points out that many relationships start with subtle cues from the women. But men aren't great at picking up subtly, so just go for it!

8. The worst that can happen is they'll say no

Just keep this in mind. Even though at one point I was scared to go on dates because I thought there was a 90 percent chance I'd end up covered in pig's blood, in reality that happens, like, 2 percent of the time. If you ask someone out, or get a little flirty, no one is going to think you're crazy or a monster or anything. They might just say no and that's OK— we've all said no to dates before! All that happens is you just won't go out with them, which is already happening anyway. Nothing lost!

More like this
Are Gemini & Scorpio Compatible In A Relationship?
By Kristine Fellizar
The Most Compatible Life Path Numbers, According To Numerologists
By Kristine Fellizar
I'm 42 & I've Never Had Sex. Is It Too Late?
By Sophia Benoit
The Case For A Hard Launch Summer
By Morgan Sullivan
Get Even More From Bustle — Sign Up For The Newsletter