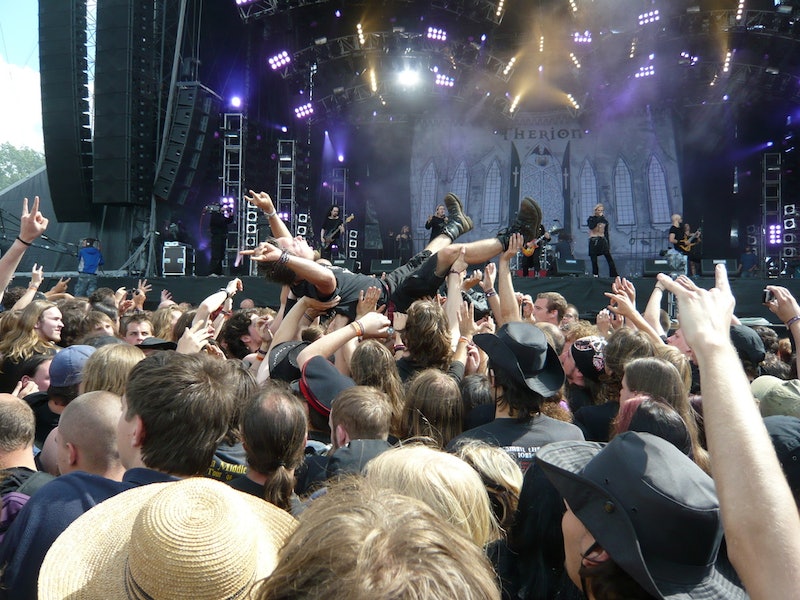 Crowdsurfing, as I understand it, can be super fun. I learned an aversion to the act early on at age 15, when a surfer at Warped Tour kicked me in the mouth so hard a tooth grew a little wiggly and forced me to the emergency dentist the day before sophomore year started. Sure, perhaps it was penance for wearing a pyramid belt in a serious way (as in, I thought I looked fly). As it turns out, there have been some way more impressive displays of crowdsurfing. Take, for instance, this John Coffey singer crowdsurfing and catching a beer.

Strangers have picked up and lifted me into the air during a number of shows. It's possible they thought they were doing me a favor, helping me see past the sea of heads, as I am a 5'3" human who mostly relies on catching the show through "tiny windows" made by space between the crowd's shoulders. Or maybe they were trying to toss me on top of all the heads so I might sail freely through the air on a leisure crowdsurfing adventure. Either way, I never appreciate this violation of personal space. It's just not for me. I don't want people I don't know (or even people I do know) pawing my body as it moves outside of my control over a beer-soaked, probably smelly crowd. But this guy CLEARLY had no qualms about it.

I might be a bit of a weenie. There have been plenty of instances where people crowdsurfed in a way that suggests they enjoy it. And then there are also instances in which said crowdsurfers pull off truly legendary feats. Like this dude from John Coffey (a band I didn't know before but apparently ain't so bad, if you've had enough coffee). What. The. Hell?! I thought I was past that point in my life where I'd find grubby dudes with cool lighter tricks totally bone-able. Yet here we are. And I'm a little turned on? Sorry. See if your loins don't also get lit with the video below:

Some critics venture the video might be planned. I'm a truther, so I lean in that direction, also. But I gotta say planned or not, that couldn't be super simple to pull off. Snaps regardless to John Coffey, is what I mean. In the spirit of celebration, let's scope some incredible moments caught on camera in crowdsurfing history:

Spidey at a BabyMetal show

That special moment when simultaneously both nothing and everything makes absolute sense.

An Avett brother takes his guitar solo while reclined on a whole bunch of open hands.

Dude takes on the crowd much less bad-ass than the woman in a wheelchair, but he tries.

A new definition of crowdsurfing entails surfing on top of one human across waves of other humans. His face says it all. All, in this case, means: "Fuuuck off." And, well? Cosign.

More like this
On TikTok, Miley Cyrus’ “Malibu” Is The Soundtrack Of Growth
By Courtney Young
Taylor Swift Knew Hayley Kiyoko & Becca Tilley Were Dating 4 Years Ago
By Grace Wehniainen
Mick Jagger Calls Harry Styles A "Superficial Resemblance" To His Younger Self
By Jake Viswanath
Halsey Calls Out Label For Asking Them To "Fake A TikTok Moment" For New Song
By Jake Viswanath
Get Even More From Bustle — Sign Up For The Newsletter