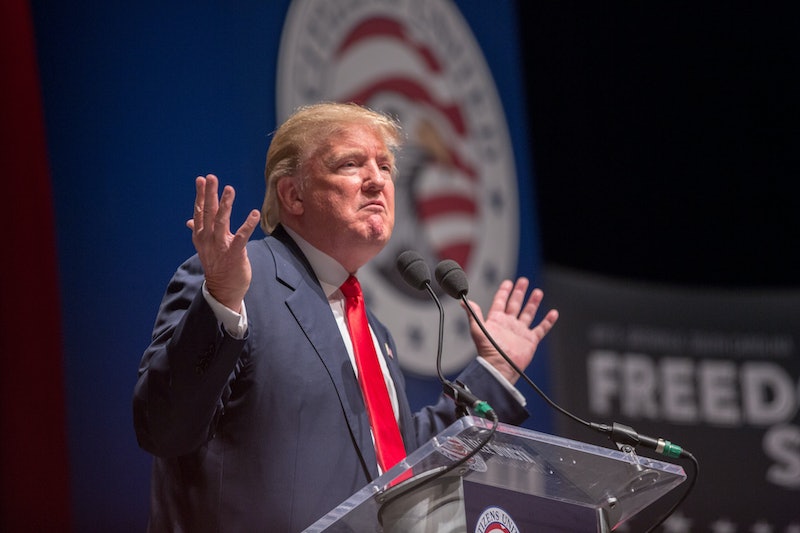 The day that Americans have feared, considered, and feared some more is upon us: Donald Trump is running for president of the United States. As if candidates didn't already enjoy making United States look ridiculous, this zillionaire and reality TV star officially joined the crowded Republican ballot at the Trump Plaza (of course) in New York City on Tuesday. But let's be real, guys — just because the country has never had a reality TV personality in the White House before, who's to say they don't make the best presidents?

The mogul and television personality announced his candidacy having received a 27 percent favorability rating in a poll by The Des Moines Register, though 58 percent said they would never vote for Trump. Only 4 percent of respondents, all of whom were Republicans in Iowa likely to vote in the caucuses, said Trump would be their first choice, putting him at the same level as Chris Christie and "Uncommitted." However, this still puts him ahead of candidates who have been in the race longer, such as Rick Perry, Carly Fiorina, Lindsey Graham, and George Pataki.

Trump considered running for the presidency in 2012, but his association with the "Birther" group, which was obsessive about where President Obama was born, harmed his legitimacy. (Well, that and other things.) The real estate tycoon has never held public office but says his business experience would help him as president. "Politicians are all talk, no action," he said Tuesday.

I like to think his experience as host of NBC's The Apprentice would come into play more often than not. Here are nine ways a Trump presidency would be exactly the same as his show. Probably.

Trump loves his name dropping. And think about it: As president of the United States, he'd be the leader of the free world! This would not, of course, mean his fame-chasing would end. He wouldn't be able to stop himself from inviting the biggest names in B-list Hollywood to come down to the White House for croquet with his model wife, Melania. Even as commander-in-chief, he would probably keep sucking up to Latoya Jackson.

Although Trump is really no more intimidating than any other reality star who throws a tantrum, he sure is fond of his scare tactics. If he ended up trading the boardroom for the Oval Office, he would probably bring in the largest mahogany table and leather chair he could find.

I imagine him sizing up other world leaders with comments like, "As a New York City real estate developer, I've seen the nastiest people on Earth. You don't scare me, Putin." He might find that he's not quite as scary without the dramatic background music.

If Trump upgraded his business executive title for Chief Executive, he would not let his pricey brand suffer. He would probably add a huge tower and obnoxious sign to the Capitol and redecorate the White House with purple silks and gold fixtures. Nothing could look secondhand, not even if George Washington used it.

Every season needs a villain, and so does a Trump presidency. Trump would need to bring in past Celebrity Apprentice offenders to make himself look fair and understanding in comparison. I'm imagining Justice Kenya Moore, Secretary of State Star Jones, and Vice President Omarosa.

Trump is a master of manipulation and stirring the pot. He can ignite a conflict just by asking a question like, "Do you think she's prettier than you?"

Trump certainly brings out the worst in people, and could do the same by putting Republicans against Democrats or the House against the Senate. With all of their bickering, he would have more time to pick out which monochromatic silk tie to wear that day and complain about not winning an Emmy.

Nothing says the Trump legacy like the objectification of women. As a man who jointly owns the Miss Universe pageant with NBC, Trump would probably keep a full-time staff of models around the White House to class the place up a little. Anytime the president needs to sign a treaty or accept a plaque, you can bet that a woman in a showgirl outfit will present it to him.

Use Of His Children

Trump always references his "advisers" Donald Jr., Ivanka, and Eric Trump. You can bet that they will be key in making his campaign more youthful and family-oriented. Ivanka will probably have to put off her fashion designing in order to work in Washington. The boys will continue their tradition of impersonating their father and wearing an excessive amount of gel in their hair.

Like The Apprentice, the Trump administration has to have a competitive factor. The conservative instigator would probably get a bunch of brands to sponsor competition among legislators. He might threaten to veto senators' legislation if they don't make the best pie recipe or design the best ad campaign for the Trump Organization.

When Trump is finally ready to leave office, the only option is to host a huge finale to cap off his four to eight years as POTUS. He'll invite hundreds to Lincoln Center, along with his celebrity cabinet to "tell all." At last, with wild applause and cannon bursts of confetti, maybe President Trump will be out of our lives forever.

More like this
Kim Kardashian Remembers Her Last Words To Death Row Victim Brandon Bernard
By Jake Viswanath
Michigan’s Governor Is “Going To Fight Like Hell” To Protect Abortion Access
By Andrea Zelinski
How To Fight For Reproductive Rights, Based On How Much Time You Have
By Courtney Young
LGBT+ Men Fleeing Afghanistan Were Denied Asylum By The Home Office, New Findings Show
By Sam Ramsden
Get Even More From Bustle — Sign Up For The Newsletter