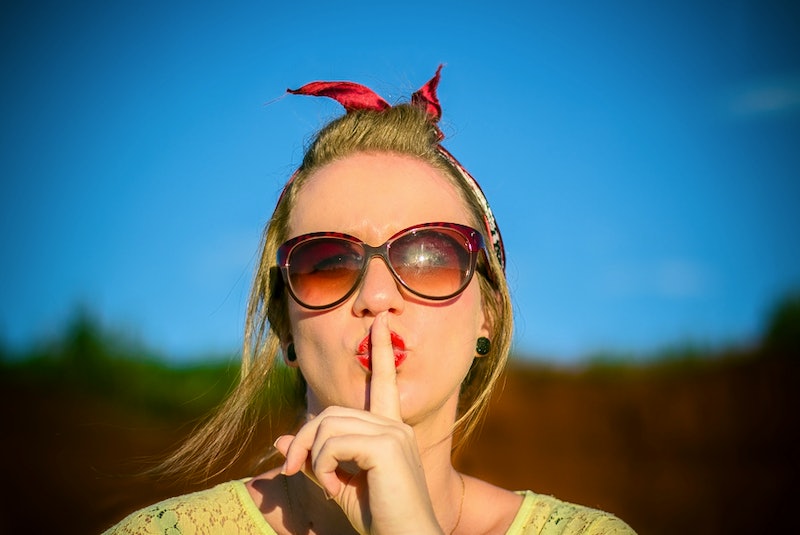 No matter how much of an angel you were growing up, I'm willing to bet that there were certain lies you told your parents at least once or twice throughout your idyllic childhood. Don't worry — you're not alone. Pretty much everyone does it. After all, if you were always supposed to tell the truth, wouldn't it be easier?

I like to think of myself as a pretty honest person, and I also think that I was an extremely easy child to raise. I never really went through one of those rebellious teenage phases when kids think it's cool to do the exact opposite of what their parents say. In fact, I frequently like to remind my mom and dad about how lucky they were.

But, just because I was pretty much a goodie-two-shoes growing up doesn't mean I never told the occasional white lie. I learned early on that my dad was always much easier to lie to than my mom. My mom was famous for asking a bunch of followup questions until you cracked under the pressure. My dad? I could just quickly answer his single question, while he kept one eye on the golf tournament on TV.

So, if I ever needed to pass off a fib — no questions asked — my dad was always my target (sorry, dad!). And, if you're smart, I'm sure that you worked out a similar strategy. Here are a few familiar lies you most likely told your dad at some point in your life. Whether your dad actually believed them or not? We'll never know.

Whenever it came to petty friend drama, my dad was totally disinterested. But, as soon as a boy entered the picture, he was fully invested. Pretty much every girl has used this line in order to avoid the impending awkward conversation that would ensue if you admitted he was anything more. Even if you didn't really like the boy that much, you still had some mercy and spared him from having "the talk" with your dad.

I'm fairly certain that dads have received formal training to respond with "Go ask your mother!" whenever they're asked anything. That's a win-win situation for them. They get to shirk the responsibility of making a decision, and they can never get blamed for a negative outcome. How did you beat the system as a child? Quickly retort with some variation of "Mom already said I could, and that I just need to check with you!" Gotcha, dad. Works every time.

There's a stain on the living room carpet? You found a scratch on your bumper? The remote's broken? You can't find your favorite coffee mug? Well, I assure you, it certainly wasn't me. Nope, it was definitely my brother. Go ask him.

I uttered this phrase too many times to count throughout my teenage years. Let's be honest — sometimes I still say it. Have I ever paid my dad back for most of those things? Not yet. Let's all cross our fingers that he's not secretly keeping a running tally somewhere, or I'm screwed.

What is it about dads and their need to ask how much everything cost? I mean, they probably paid for it, but still. This little white lie always came in handy when you were eager to avoid the next "you don't know the value of a dollar" or "money doesn't grow on trees" lecture.

If your parents ever found out about something terrible you did, you knew that it was always easier to just blame it on someone else. Sure, maybe you were there, but it definitely wasn't your idea. You were just going with the flow and trying to fit in. You may have saved yourself some parental disappointment, but you still needed to prepare yourself for the "if all of your friends jumped off a bridge" speech.

My mom was always pretty strict with the sick days when I was young. I couldn't stay home unless I was at least one of the "three B's": barfing, bleeding, or blue. In contrast, my dad would cave if I had just a slight sniffle. I learned to approach my dad with my perceived illness first, so that he could do the hard work of convincing my mom.