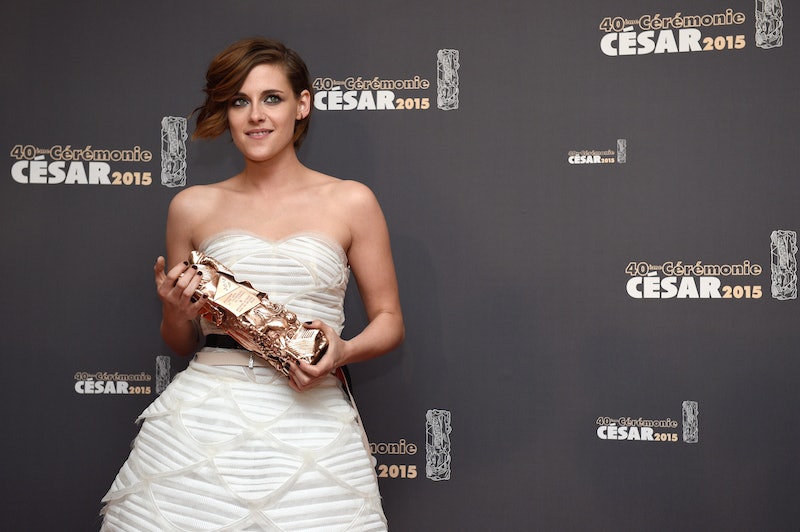 While it's certainly exciting to hear that Kristen Stewart's mother is one cool-as-hell lady who met her daughter's girlfriend and had this to say about her: "What's not to accept? She's a lovely girl," as reported by The Mirror, unless we hear confirmation of who Stewart is dating from the actress herself, there's no way to be sure who she's in a relationship with. It has been rumored, though, that Kristen Stewart is dating Alicia Cargile. Here's what is know about the dynamic duo: They like hanging out together. They both seem to enjoy refreshing caffeinated beverages. They've hugged and kissed in public. And neither looks like they GAF.

(Update, June 15: Jules Stewart has spoken with Us Weekly and claims that while she spoke with The Sunday Mirror, she didn't "discuss Kristen.")

(Update, June 16: Mirror reporter Sharon Feinstein shared a statement on her blog, saying, in part, "I am aware that Ms Jules Stewart has stated that her interview with me has been used out of context, that she never discussed her daughter or her daughter’s relationship. That is simply incorrect.")

Stewart and Cargile are either soul mates, BFF's, professional partners, or all of the above. I should add that Jules Stewart also told the publication, "I feel like people need to be free to love whoever they want. I accept my daughter loves women and men. It’s OK to be who you are in my world. We all choose our friends so we should be free to choose our lovers." Which is great, but still — my own mother probably thinks my favorite food is still chicken nuggets, so it's important to remember Stewart's kick-ass mom is just a third party.

Regardless of Kristen Stewart and Cargile's true relationship status, there's no denying people are curious about her. You've got to be pretty awesome to make it into the Clouds of Sils Maria star's inner circle (which, lately, seems to consist of only Stewart and Cargile), not to mention brave for willingly dealing with all of the attention you had to expect you'd receive as her maybe girlfriend.

Here are seven things you should know about the Alicia Cargile.

1. She used to be Stewart's personal assistant

The actress revealed to Conan O'Brien last April that she hired a friend to help her manage her life, but that things wound up getting a little more personal than you might think: "There's so much isolation and protection that has to happen. So then you end up, kind of like, hiring a buddy, a confidante, like, somebody to organize your schedule, but in addition to that, like kind of like, live with you essentially. So yeah, it's definitely more complicated than, 'Go buy me tampons because I'm embarrassed to do it myself.'" If you've seen Clouds of Sils Maria (which is so good) you might notice something familiar taking place between personal assistant and star.

2. She's into film — but on the other side of the camera

page, she is employed as a visual effects producer at Nomad Editing Company in Los Angeles, which is a good thing because can you imagine the conflict of interest when the person you're allegedly dating is also paying your salary? Yikes.

4. She is influencing Stewart's style

Any time you spend a great deal of your day with a person, you are bound to pick up on some of their mannerisms and maybe even steal a shirt or hair tip from them, but according to sources who spoke with Radar Online, Stewart and Cargile are so nuts about each other that they "are inseparable and mimic each other's everything."

The pair was spotted holding hands in Hawaii while strolling the beach in January. They must have realized there was a possibility they would be photographed together and raise suspicions, but they kept on doing their thing.

6. She has lots of tattoos — including a hers-and-hers matching tat with Stewart

Cargile has quite a few tattoos on her arms and even a Black Flag band logo on her lower abdomen. But the one that got people talking was that of an arrow on her right arm that, when standing next to Stewart, points toward the Twilight star's matching arrow tattoo, reports Radar Online.

7. She's as private as Stewart — maybe more so

Cargile's Twitter account looks like something she started and then abandoned. Similarly, an Instagram page that may or may not belong to her is private and has no followers. The assumption that can be made here is that Cargile is the real deal — someone who cares as little for fame and publicity as Stewart and simply wishes to lead her life, love the woman she (maybe, possibly) loves, and not reap the benefits of all of the attention given to the actress.

Whether Cargile is Stewart's friend or more remains to be seen, but judging by the few facts that can be dug up about this cool woman, it's not surprising they'd want to spend as much time as possible together.