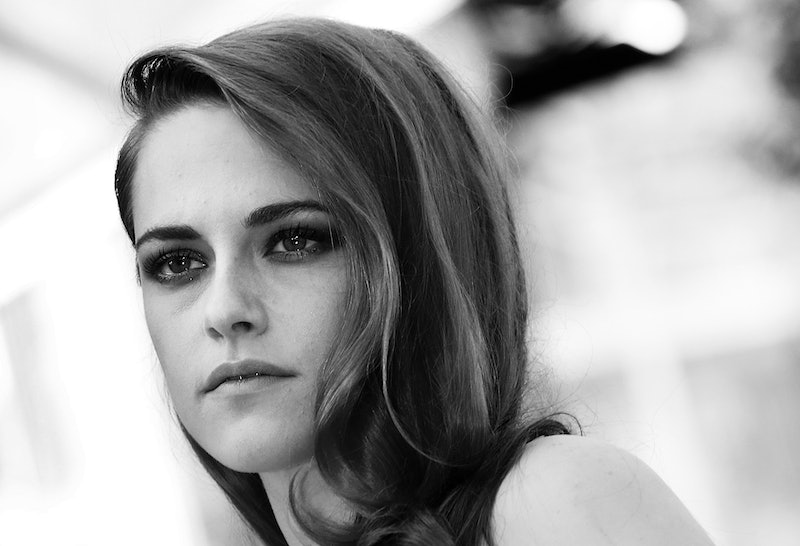 As Kristen Stewart has matured over the years from the awkward teen to the savvy young artist, I, too, have matured with her. In fact, more so than ever, Kristen Stewart has been doling out life lessons about love, ignoring the haters, and staying true to oneself. I think we could all take them to heart. While all of us have either a love or a hate relationship with Twilight, the franchise that launched her career, Stewart herself has managed to build a bold and fierce identity in the face of an awful lot of haters, and we should take note.

Honestly, not many actors make it through the sort of media frenzy that Stewart has endured since she first hit it big. Essentially, every moment of her relationship with fellow co-star Robert Pattinson was put on public display, and her big affair scandal with the Snow White and the Hunstman director would have ruined someone of lesser fortitude. Instead of backing out of the limelight or having a nervous breakdown, Stewart has always taken the paparazzi nonsense with stride, ignored the gossip, and focused on her work. Consequently — where most actors never find work outside of the role that initially made them famous — she's been able to remain on the A-list and pursue diverse, high profile projects.

Here are seven times that Stewart taught us that all life takes is a little self-possession, and you can literally do anything.

1. When She Wasn't Afraid To Look Silly

Remember when she dressed like a dude for Jenny Lewis's "Just One Of The Guys" video? You know who doesn't give a damn about antiquated gender roles? Kristen Stewart. Haters can suck it.

2. When She Explained The Importance Of Honesty

In an interview with The Telegraph , Stewart dropped the following truth bomb: "It’s impossible to always get across what I’m trying to say, but, if I just stay honest, then I’m not going to look back on any of these interviews and wonder what I was trying to do or be." Life isn't about creating an image; it's about staying honest with yourself, moment to moment.

3. When She Changed Into Vans For Her Cement Imprint On The Walk Of Fame

I would have stuck with the heels, but that's me staying true to myself. You do you, Stewart!

4. When She And Charlize Theron Expressed Their Opinion About The Paparazzi

The media has been unbearably unkind to her on numerous occasions, dragging her personal life into the public domain and then slandering every aspect of it.

5. When She Swore At Comic-Con

Sometimes you say the wrong thing in the wrong setting, and that's okay.

6. When She Dropped This Truth Bomb About Making Mistakes

Preach it sister. Do you have any idea how many cell phones I've lost or broken in the past six months? Learning from your mistakes is hard.

7. When She Dropped This Other Truth Bomb About Loving Yourself

How did you get so wise, Kristen? How do I become as wise as you? Do you teach classes?

More like this
Adele’s All-Female Lineup Includes Kacey Musgraves, Mahalia, & Self Esteem
By Shahed Ezaydi
Howard Stern's Net Worth: Is He The Richest Man In Radio?
By Hugh McIntyre
9 Photos Of Margot Robbie & Ryan Gosling As Rollerblading Barbie & Ken
By Alyssa Lapid
Kris Jenner Drunkenly Toasts Khloé Kardashian’s 38th Birthday With This Speech
By Grace Wehniainen
Get Even More From Bustle — Sign Up For The Newsletter