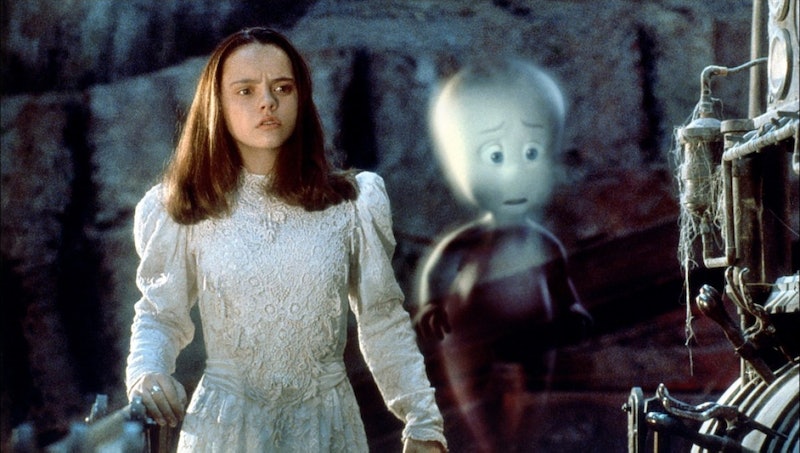 Do you believe in ghosts? I'm not sure if I do. I generally think they could exist, within the realm of possibility, but I also sort of think if they did exist, why haven't more, and less crazy, people seen them? A man from Leeds, UK, seems to have Snapchatted a picture of a ghost in a hospital to his girlfriend while working the night shift at the Leeds General Infirmary. The image shows the diaphanous figure of a girl in a dress, leaning into a door at the end of a long hallway.

Andrew Milburn, 21, Snapchatted the image to his girlfriend to allegedly "prove" that he was at work. Which leads me to believe that the main issue here is not the existence or non-existence of a ghost, but actually that his girlfriend doesn't trust him at all. This means that either he is untrustworthy, which she knows from experience, making her wary, or she is irrationally untrusting, which must suck for him if he's a stand up sort of guy. Yep, I just Doctor Phil-ed this sh*t. Troubling relationship aside, the image is actually kind of spooky, especially when you think how terrifying long hallways in quiet hospitals are at night:

My personal first reaction to the photo is that it's totally doctored (geddit!!?!!?!?!?!), and upon further research, I've found I'm not the only one that thinks so. Apparently there's a "ghost adding" app that you can download to your phone, allowing you to superimpose a non-corporeal figure into your photos. The app is even called "Snap Ghost". In more damning evidence, the girl ghost in Milburn's photo looks alarmingly like one of the images you can add in Snap Ghost:

I feel like if you want to trick the Internet, you're going to have to try a little harder than that, Mr. Milburn.