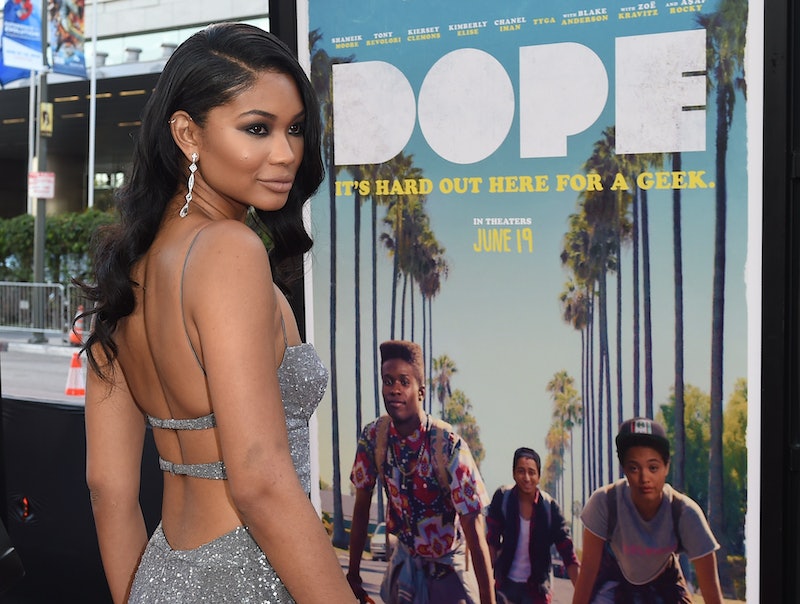 Out of all the many reasons to see Dope when it comes out on Friday (the message, the music, the pure, amazing craziness of the plot), the biggest might be its ensemble of actors. Dope, a comedy about a few insane weeks in the life of a high school senior, features some remarkable performances from a cast of people you'd never expect, including Shameik Moore (who plays the lead, Malcolm), A$AP Rocky, and, most surprising of all, Chanel Iman. Iman, the Victoria's Secret supermodel, has her first major acting role in Dope, but perhaps not her last; will Chanel Iman be in more movies down the road?

Here's hoping. Iman is compelling in Dope, playing, Lily, one of the most watchable characters in the film — probably due to the amount of drugs she's assumed to be on when she's first introduced. Lily is mysterious and intriguing, and without giving away any spoilers, her interactions with Malcolm and her friends make for some of the funniest and strangest moments in the movie. It's a small part, but a great one, and Iman knocks it out of the park.

It's a shock to realize that it's the model's first foray into the movie world, but great evidence that it shouldn't be her last. While Iman has no other roles currently lined up, Dope's gotten enough good reviews that signing onto another part should only be a matter of time. And the model is clearly interested; in a recent interview with InStyle, Iman said that she took the role in Dope in order to "show people my acting ability," and in a talk with Elle, she recalled auditioning twice to get the part, showing the effort Iman was willing to put in just to get cast. And, most tellingly, the star used a May piece on Style.com to state that "acting was something I had always wanted to do."

It likely won't be long before Iman signs onto another role and wows audiences again, perhaps in a film even bigger than Dope. In the Style interview, Iman revealed her acting goals, saying that she hopes to work alongside people like Halle Berry and Quentin Tarantino. It's safe to assume that the actress is just as comfortable in her abilities as we are; hopefully, she'll get the chance to show them off again soon.

More like this
What’s New On Netflix: A Victoria Justice Rom-Com & The Return Of David Letterman
By Arya Roshanian
What’s New On Netflix: The Return Of 'Bling Empire' & A Rebel Wilson Comedy
By Arya Roshanian
You Can Thank 'Spider-Man' For The Meme-ification Of Movies
By Dana Schwartz
Laura Dern Said “Cultural Awareness” Made Her Rethink This 'Jurassic Park' Fact
By Grace Wehniainen
Get Even More From Bustle — Sign Up For The Newsletter