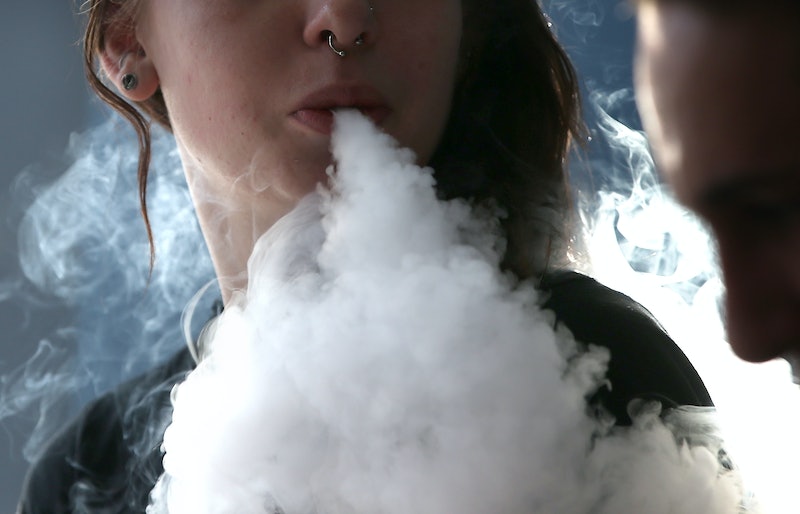 I'm not on board with vaping. Don't get me wrong, I'm not on board with smoking either. I used to smoke, mostly socially, but for periods I would smoke regularly, and having reformed and quit (maybe now only having a cheeky cig 2-3 times a year, having it make me feel sick and regretting it instantly), I can say very confidently that being a smoker is stupid. You stink, your mouth feels awful, your whole self feels awful, and you could die from it, which is probably the most compelling evidence that it's stupid. But vaping is dumb too, and now apparently professional vaping is a thing, which makes me want to curl into a ball in the corner and never leave.

These people are taking idiocy it to the next level and turning vaping into a sport. Basically, "professional" vapers are people who are vying to blow the biggest cloud of vape smoke possible. It's good to have goals, am I right? The "professionals" have all sorts of fancy vape gear, so don't go trying this at home. Some are even sponsored by vaporizer brands. Clouds are judged on “girth, length, and overall size density", so is it any wonder it's a male driven competition? It seems like maybe vape clouds are the shiny red convertibles of our generation's machismo grubbing men.

Look, I get how people might think vaping is "better" than smoking, but at the end of the day, purposefully inhaling any kind of unknown chemical substance into your lungs is bad. There's already evidence to suggest that vaping lowers your immune system, and I have complete confidence that as time goes on more terrible side effects will reveal themselves. How about this? Just don't smoke. Too easy. Meanwhile, having people like this glorifying vaping and turning it into a competition can't be doing wonders for the "don't smoke, it's dumb" argument. When you make something competitive, especially when it's so easy to upload videos to YouTube of you doing said dangerous thing, you've got a hashtag movement on your hands. Watch these vapers "cloud chase" below:

Here are some equally weird, but somehow much less stupid competitions that I can get behind more than competitive vaping:

Call me when someone has a "making better decisions with your life" competition, because I'm here for it.