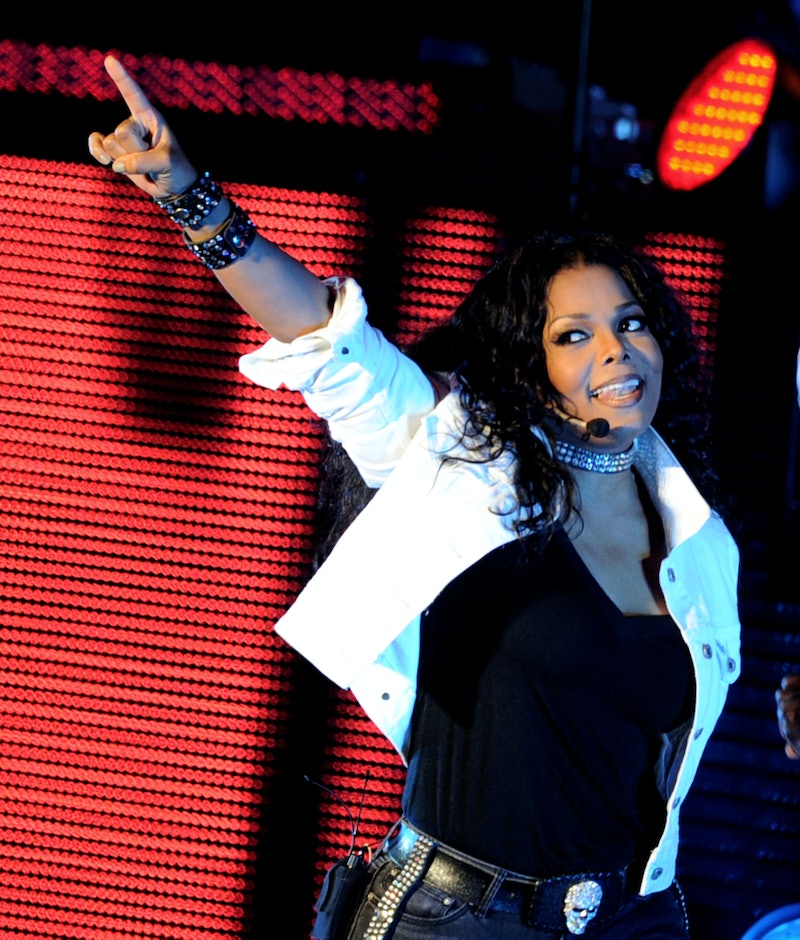 It’s official, and everyone can finally relax now: Janet Jackson is back. I don’t think there is any actual way for me to put into words the sound I made when I heard that Janet Jackson’s new record and a world tour were really happening, but imagine ear piercing and loud enough to make my cats jump. Because it is happening: the tour dates for Janet Jackson’s Unbreakable World Tour have been posted on her website, turning the tease she gave us in May into the best reality EVER. The tour, which will accompany the release of her new as-yet-unnamed album, will be the first for Jackson in over four years. An even bigger deal? The album will be her first since 2008’s Discipline, and the first official album released on her new label, Rhythm Nation. BEST LABEL NAME EVER, btw.

So, what can we expect from this momentous occasion? After all, world tours are so hard to plan, especially if you’re a Jackson. With a music career as long and kick ass as hers, there are a lot of moments and — ahem — mishaps to navigate in order to make the tour one that fans will be talking about for years to come. And, although I’m hurt that her tour doesn’t include any visits to the Northeast (Chicago friends, I’m coming for you!), I thought I’ve give Miss Janet a hand — a gloved hand, of course — and plan the whole thing for her.

Here’s what you can expect from the tour:

With a long history of midriff baring tops, controversial album covers, and public costume malfunctions, you can expect Jackson to poke fun at her past and give her new audiences something to talk about. I’m personally hoping for her to come out at least once in just jeans and a pair of nipple tassels.

It’s been almost six years since Michael Jackson died, and, even though Janet paid tribute to him at the AMA in 2009, it wouldn’t be a performance without some sort of nod to him. Be it a cover of one of his popular songs, a "Thriller"-esque dance, or an appearance by the remaining members of the Jackson 5, you know that whatever she does is going to give her audience chills/leave them in tears. I’ll be in the cheap seats praying for an “Asha-oo” with the rest of them.

The pre-order link is already live on Jackson’s website, so make no bones about it: this tour is definitely a means of selling her still-untitled album. In fact, pre-order bundles include a vinyl copy of her first single off the album AND special access to concert ticket pre-sales. Since Mama Jackson is doing so much to hook her early birds up, you can bet that a chunk of the performance will include new songs from the album.

So help me god, if she doesn’t put on some shoulder pads, a black cap, and a pair of gloves at some point during the performance, I am going to WALK. OUT. Just kidding. I’d never walk away from Janet. Still, with a career like hers, Jackson has a string of hit songs that audiences of all ages will be wanting to hear. Whether you were tuning into MTV during the “Rhythm Nation” era or catching her latest video on TRL after school, Jackson has fans in a whole slew of generations, and she knows it. Don’t worry. She’ll do right by all of us with a killer rendition of “If.” Especially if I have anything to say about it.

Pretty much every Janet Jackson song has been made better by a kick ass dance routine with more commitment and hard lines than an entire season of So You Think You Can Dance. You can count on the concert being well choreographed, and on Mama Janet herself making some pretty dramatic entrances after each costume change.

Never one to shy away from making a statement, Jackson has always used her music to tackle a ton of social injustices. Racism, poverty, homelessness, you name it. You can be sure that Jackson will be doing more than just singing pretty songs during her performance.

Can’t wait any longer? Here are the dates for the tour: