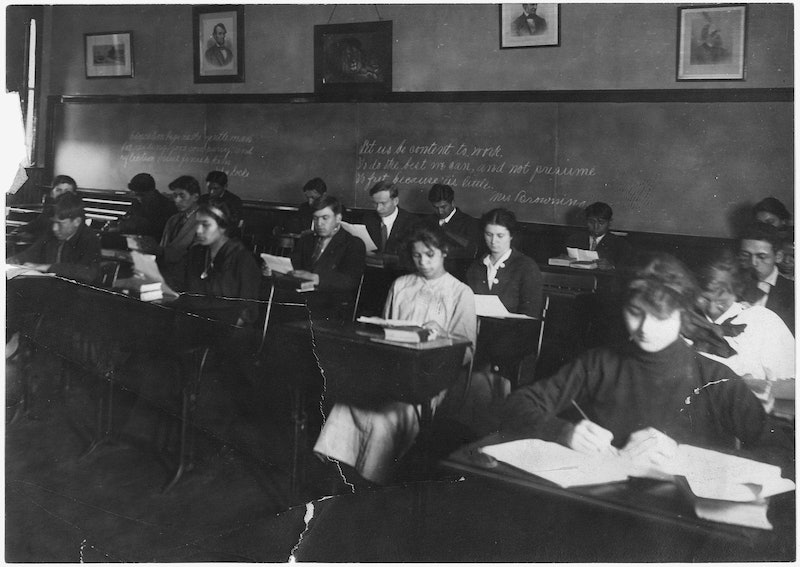 Some of us adults are guilty of giving the YA genre the side eye. Whether we believe that YA novels can't possibly hit on themes we can relate to, or that dystopia and fantasy seem silly, or we believe that YA authors must be inferior to those who write for adults, some adults refuse to pick up young adult fiction. These people are missing out. And though it may seem so, they're not representative of many adult readers.

An ongoing biannual study from Bowker Market Research found that 55 percent of buyers of YA novels are over 18 — and before you say it, no they're not just buying them for their kids. The study found that 78 percent of these adults bought a YA novel for personal reading. The research is sponsored by Little Brown for Young Readers, Random House, HarperCollins, Scholastic, Disney, Penguin, DK, and Macmillan. The study also notes:

30% of respondents reported they were reading works in the Hunger Games series. But the remaining 70% of readers reported a vast variety of titles (over 220), only two of which commanded more than five percent of overall sales – Harry Potter and the Deathly Hallows and Breaking Dawn.

The overwhelming press the Hunger Games and Harry Potter series received — not to mention the popular movies they inspired — made it so we adults couldn't escape them even if we wanted to. This "classroom" on YA 101 aims to direct YA newcomers to the best, most critically acclaimed or most popular young adult fiction on the market to hopefully change their minds of YA skeptics. The aforementioned Hunger Games and Harry Potter series are not on this list because they are no-brainers. And if you want to go ahead and read the Twilight series, I can't stop you.

Right, so, some adults are skeptical of YA novels because they believe they aren't as well written as novels for adult readers. But these books have captured the praise of major book reviewers, such as Booklist, Kirkus, and Publisher's Weekly. These acclaimed novels tackle plots involving the Holocaust and cancer, which may be considered "adult" — and they also deal with universal themes of feeling like an outcast, dealing with death, and figuring out who you are.

The Book Thief by Marcus Zusak is narrated by Death — not something you'd imagine for a book directed at pre-teens and teenagers. Zusak tells the story of Liesel, a foster girl living outside of 1939 Munich, who steals books and reads them to her neighbors and a Jewish hideaway in her basement during bombing raids.

"The writing is elegant, philosophical and moving," writes Kirkus in a starred review of The Book Thief. "Even at its length [512 pages], it’s a work to read slowly and savor. Beautiful and important."

In addition to its overwhelmingly positive reviews, The Book Thief tops YA bestsellers lists on Amazon.com this year, despite being published in 2007. Also near the top of those bestseller lists is John Green's The Fault in Our Stars . Green is no stranger to bestselling YA — he previously wrote Looking for Alaska , Paper Towns , and other young adult novels, which are also all worthwhile — but The Fault in Our Stars saw unparalleled buzz and success.

The Fault in Our Stars focuses on Hazel and Augustus, two teenagers who meet in a kids' cancer support group and form a lasting bond through sickness and health. But it does so without falling into saccharine clichés and tropes, because, as Hazel says in the novel, "cancer books suck." Time magazine called it the number one fiction book of 2012. Lev Grossman writes, "The Fault in Our Stars is a love story, one of the most genuine and moving ones in recent American fiction, but it’s also an existential tragedy of tremendous intelligence and courage and sadness."

Brushing up on Your YA History

Though it's currently enjoying major success in the bookselling industry, YA is not a new phenomenon. Any classroom on YA lit should delve back into history; these two novels were published in 1999 and 1993, respectively.

The Perks of Being a Wallflower by Stephen Chbosky has seen a more recent surge of success thanks to its movie adaptation starring — no stranger to YA movies based on books — Emma Watson, aka Hermione from the Harry Potter movies. But the novel has been speaking to adults and children alike since its publication over a decade ago, becoming a cult phenomenon despite initial dismissive reviews from Publisher's Weekly and other sources.

In Chbosky's novel, Charlie, the eponymous "wallflower," tells readers through a series of letters about his first year of high school — something teenagers can relate to in their everyday reality and something adults can look back on with understanding. The Perks of Being a Wallflower has been translated into 31 languages, but it's also one of the most challenged books because of its depictions of young adult sex and drug use. The novel has also drawn comparisons to The Catcher in the Rye .

The Giver by Lois Lowry strays from Wallflower because it did receive critical acclaim at its first publication in 1993 and still remains a novel of choice for high schools across the country. The first in a series of dystopian novels (pre-Hunger Games!), Lowry's The Giver earned the American Library Association's Newbery Medal in 1994, received a starred review from Booklist, and topped bestseller lists.

Lowry tells the story of Jonas, who is born into an "ideal" world, as he begins to unravel the truth about his society.

"Wrought with admirable skill — the emptiness and menace underlying this Utopia emerge step by inexorable step: a richly provocative novel," wrote Kirkus in 1993.

Graduate studies: Making an Investment in a Series

While The Giver is part of a series, it is often thought of as a single work of fiction. Today, many YA authors entice readers with cliffhanger endings as they enter into writing intending to create several books. Lauren Oliver's Delirium is one such book. Oliver created a three-book series starting with Delirium and moving into Pandemonium and Requiem. Delirium is a good starter novel for adults just moving into YA fiction because while, yes, it is set in a dystopian society, it does seem to be somewhere in the near future — no laser guns and hovercrafts here — and it tells the story of a first love.

In Oliver's future world, love is considered a mental disease, causing "deliria," and is "cured" by a lobotomy when teenagers reach 18. It's a richly developed world and despite the subject matter, Oliver manages to make it seem realistic and honest. Her protagonist, Lena, falls in line with her society's rules until she meets Alex and begins to experience the deliria everyone is making such a big deal about for the first time.

Another dystopian trilogy with a strong female protagonist is Veronica Roth's Divergent series, which concluded last month with Allegiant, causing an uproar among fans. Despite this backlash, the series is very much worth reading. Roth creates a compelling world where citizens are divided into factions, based on what characteristics they believed caused the downfall of their world. For example, the protagonist, Beatrice-turned-Tris, was born into Abnegation, who believe in selflessness because they saw the downfall of society attached to selfishness. She moves to Dauntless, who are courageous because they believe society was ended by cowardliness.

Tris is a powerful heroine who is more focused on fixing her world and finding its secrets than any love triangle.

"In this edgy debut (definitely not for the fainthearted), first in a trilogy, promising author Roth tells the riveting and complex story of a teenage girl forced to choose, at age 16, between her routinized, selfless family and the adventurous, unrestrained future she longs for," writes Publisher's Weekly in a starred review about Divergent.

The series has topped Amazon.com and other bestseller lists since its debut in 2011 and rocked record books with its finale.

This story has been updated.