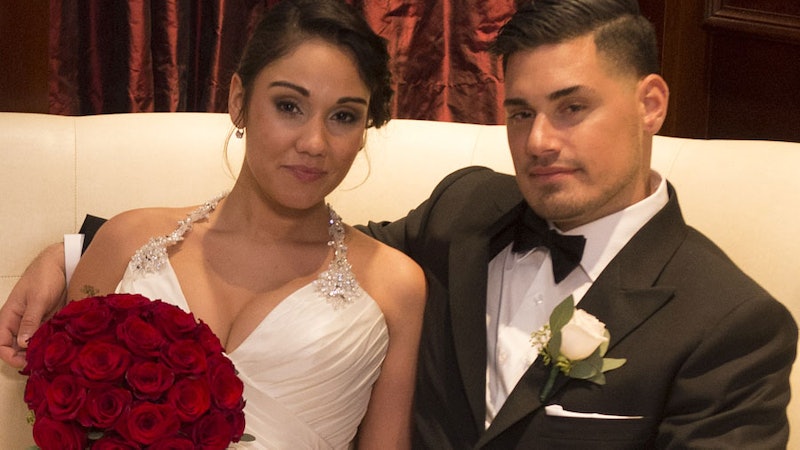 In the finale of the second season of Married At First Sight, where couples meet on the altar and then spend the next six weeks married before deciding whether they want to stay together or get a divorce, only one couple opted for the latter option: Davina Kullar and Sean Varricchio. But, now that the experiment is over and the pairs' real lives are starting, Jessica Castro and Ryan De Nino have split as well, apparently, and things are allegedly getting ugly. Which I guess is perhaps to be expected when you meet and marry a stranger on the day of your wedding, but it's still a shame to see.

Castro and De Nino had easily the most volatile relationship of the three couples, with almost four weeks out of six spent fighting or giving each other the silent treatment. But, still, I wasn't surprised to see them elect to stick it out in the finale; for one thing, they were in a good place for the last two weeks of the experiment, and, for another, they're both extremely stubborn, so I couldn't imagine them wanting to admit defeat on national television. But, now that the cameras have departed and the show is over, it's apparently time to stop being polite and start getting real, to borrow a phrase from another reality show, and that's exactly what "Team DeCastro" has been doing — restraining orders and all.

First, a rumor began circulating on MAFS web forums that De Nino had stormed out of the reunion taping after Castro accused him of using drugs, something we won't be able to officially confirm until the episode airs on Jun. 16 at 9:00pm on A&E. But in the meantime, something we do know is that Castro seems to have taken out a restraining order against De Nino, at least according to a post he made to his Instagram. Yikes.

It appears to show a petition from Castro asking for a restraining order against De Nino, although he doesn't include a glimpse of the section of the document that says why. But you can tell by his caption that he's extremely angry with his wife, and there doesn't seem to be any love lost on Castro's Instagram either. She posted the following:

Bottom line, whether these two have started going through the full motions of a divorce yet or not, they really don't seem to be in a good place, so separating is probably the best option.