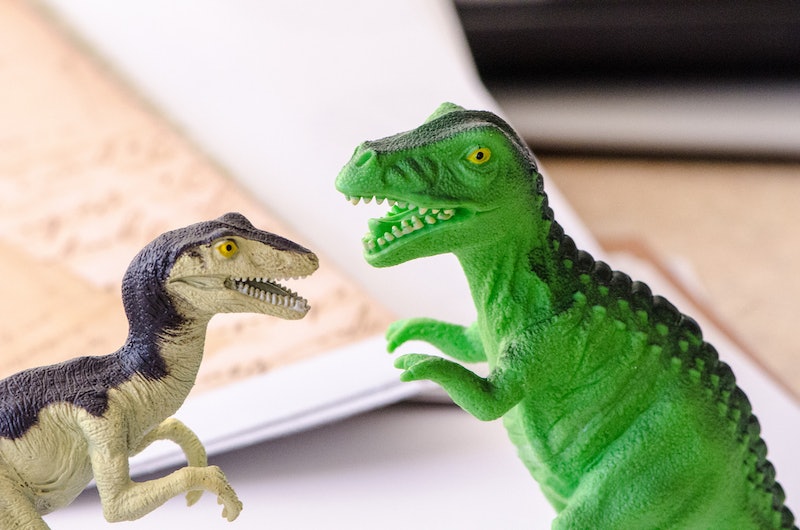 It's no secret that Hollywood's depictions of dinosaurs aren't always accurate — but what about dinosaur toys​? Do these strange and magnificent creatures fare any better as playthings? In order to get to the bottom of the issue, Mashable's The Watercooler had a dinosaur expert critique dinosaur toys… and unfortunately, the news isn't good: Dinosaur toys are, by and large, extremely inaccurate. I mean, they're still pretty awesome — don't get me wrong — they're just kind of… well, wrong. Whoops. But hey, at least we know how to spot a fake dino now, right?

Mashable went to Dr. Paul E. Olsen, who's a paleontologist and teaches in the Department of Earth and Environmental Sciences at Columbia University, in order to see how well your average dinosaur toy holds up to what know about them in real life. While it's true that our knowledge of dinosaurs is constantly evolving — I mean, just look at the hash we made of the Apatosaurus — the bottom line is that most dino toys are made to look cool, rather than to look accurate. In spite of their glaring inaccuracies, though, Olsen takes a positive view on dinosaur toys. “If kids notice the inaccuracies,” he says, “and they compare them with books or with other pictures and see what the differences are between what we really think we know about them and the way they're portrayed with toys, that's great! It's a learning moment!”

So let's have our own learning moment, shall we? Here a few ways to spot a fake dinosaur, courtesy of Dr. Olsen's take on dinosaur toys. Scroll down to watch the full video — and seriously, you guys. Watch it. It's the best.

This one, which is seemingly meant to be a Spinosaurus, has no feathers. Pretty much all dinosaur toys lack features, which may have been forgivable when I was a kid… but in 2014, some fossils were found that suggest that a lot of dinosaurs had feathers. This make a certain amount of sense, given that we know birds are descended from dinosaurs, doesn't it?

2. It can take off its skin as if it were a shirt.

Well, duh. But in this case, it's what's underneath once the skin-shirt comes off that matters: According to Dr. Olsen, this toy's skeleton, which is supposed to be an Amargasaurus, is “totally and completely inaccurate” — the least of which includes its lack of legs.

3. It only makes one sound.

Stegosauruses had a “huge range of sounds” they could make; Olsen is very particular about the fact that they didn't just always go, “BRAWrrrrrRAW!” Also you really need to watch that part of the video, because Dr. Olsen going “BRAWrrrrRAW!” is one of the greatest thing you will ever see.

4. It's a Jurassic Park Velociraptor.

This is not a dinosaur. At all. I don't know what it is, but that's apparently what it's not.

This is also not a dinosaur. It is an imaginary creature. In some circles, it's known as a “Bullshitosaurus.” Also, everything you know is a lie.