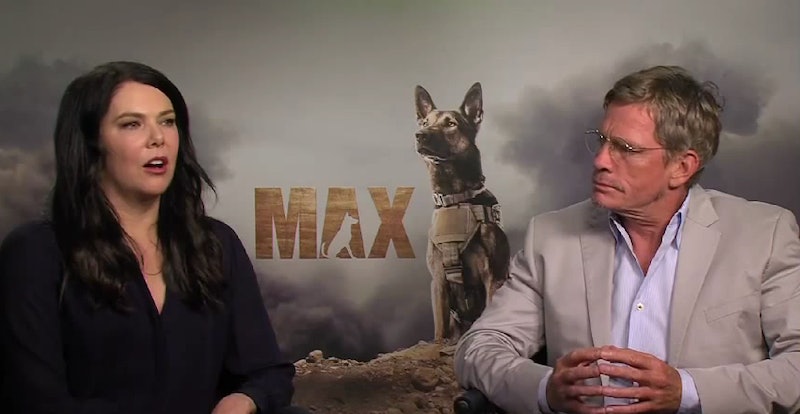 There are military movies, and then there are dog movies. The two genres aren't often a natural mix, yet the new film Max has seamlessly blended very different concepts into a whole new breed of film. And after screening the film, I can attest that the formula works — just remember to bring a full box of Kleenex to the theater. The very concept of Max is heart-wrenching: when Kyle, a Marine (The Duff's Robbie Amell), is killed in the line of duty, his younger brother Justin (Josh Wiggins) must step up and raise Max, the military dog he left behind. Like the rest of Kyle's family, Max is also dealing with his own grief and is adjusting to life without his beloved handler. Gilmore Girls ' Lauren Graham and Thomas Haden Church play Kyle and Justin's parents dealing with the loss of Kyle in vastly different ways, and, like Max, are learning to adjust to their new reality. I sat down with Graham and Church to discuss the film and why it was so important for them to help tell this particular story.

"I was really drawn to... how sincere the movie is and also illuminating in terms of what these dogs do, [and] the sacrifices that families make to serve our country," says Graham of the film. "It just had such complexity, especially for a family movie."

Church saw parallels between his own father and Ray, the father and war veteran he portrays onscreen. "My dad was in the military, and was wounded in combat in World War II... That played a big part in [wanting to do a war movie,] but this one was so unique in that... it was telling a war story about a combat soldier who happens to be a dog, and how that dog impacts the lives of the troops he serves with in such a crucial, life and death way."

Watch the full interview with the two cast members below, and see Max in theaters Friday, June 26:

More like this
20 Celebrity Couples Who You Forgot Dated In 2002
By Jake Viswanath
'Stranger Things' Star Joe Keery Is Dating An "Indie Scream Queen"
By S. Atkinson and Grace Wehniainen
Shocked Fans & Former Co-Stars React To Ray Liotta’s Death At 67
By Grace Wehniainen
Everything To Know About Marvel’s 'Thor: Love And Thunder'
By Grace Wehniainen
Get Even More From Bustle — Sign Up For The Newsletter