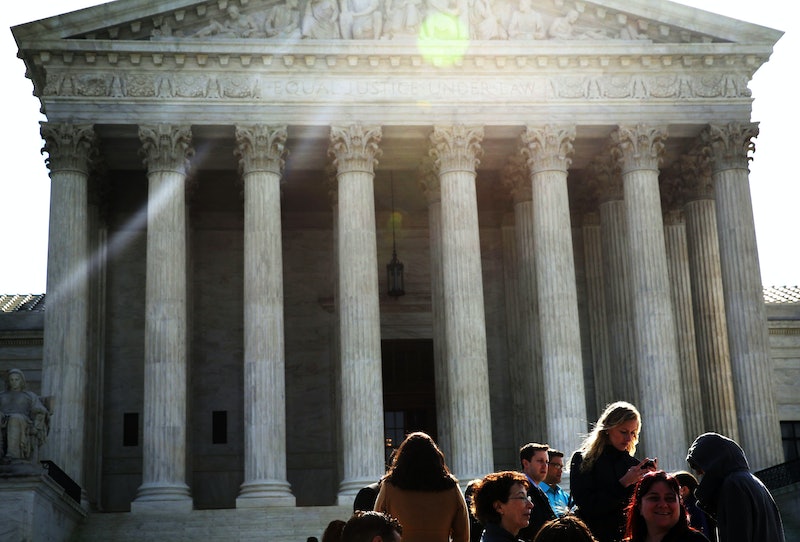 Thanks to the U.S. Supreme Court, North Carolina won't be able to pass one of the most radical forced ultrasound laws in the country. On Monday, the Court shot down a bid by the state to revive its law requiring women who want an abortion to have an ultrasound and have the doctor describe the fetus to them. North Carolina's forced ultrasound law was passed by the state's Republican-led legislature, but it was ruled unconstitutional in 2011 by the U.S. Court of Appeals for the fourth circuit on the grounds that it violated physicians' free speech rights.

Reproductive rights proponents challenged the law on First Amendment grounds, claiming that it forced doctors to deliver an anti-abortion message on behalf of the state. Specifically, the law required doctors to say that "the father [of the baby] is liable to assist in the support of the child” and that “the woman has other alternatives to abortion, including keeping the baby or placing the baby for adoption." Then, the patient would be forced to watch the ultrasound and learn about the fetus' "anatomical and physiological characteristics." If the patient tried to avoid the information by closing her eyes or covering her ears, the doctor would've been legally required to continue speaking.

Recently, a number of states have passed these kinds of restrictions on abortion. The Guttmacher Institute found that 12 states require verbal counseling or written materials to be provided to women seeking abortions. This information must include materials on accessing an ultrasound. Even worse, 24 states require that abortion providers must perform an ultrasound on any woman who wants an abortion. The Institute conducted a study about state-developed abortion counseling materials and found that they are often filled with medical misinformation and bias:

In some cases, the state goes so far as to include information that is patently inaccurate or incomplete, lending credence to the charge that states’ abortion counseling mandates are sometimes intended less to inform women about the abortion procedure than to discourage them from seeking abortions altogether.

The journal Obstetrics & Gynecology also published a study last January that found that required ultrasounds don't have much of an effect on a woman's decision to have an abortion, according to Slate. The study analyzed 15,575 medical records from an urban abortion care provider in Los Angeles. Researchers asked every patient seeking an abortion how she felt about her choice. Patients who made “clear and confident” replies were rated as having “high decision certainty,” while those who seemed sad, angry, or ambivalent were said to show “medium” or “low” decision certainty.

Of all the women surveyed, only 7.4 percent fell into medium or low decision certainty. Then, patients underwent ultrasounds as part of the standard procedure, and 42.5 percent of them chose to see the images of the fetus. Of those, 98.4 percent terminated their pregnancies and 99 percent of the women who did not look at the photographs ended their pregnancies. All of the women who looked at the ultrasound images were part of the 7.4 percent that had medium or low decision certainty, according to the study.

Of the nine justices on the Court, Justice Antonin Scalia voted to hear the case, according to Talking Points Memo. Other federal appeals courts upheld laws similar to North Carolina's in both Texas and South Dakota, according to The New York Times. Currently, there are pending cases open in seven states across the U.S. that are seeking to overturn abortion restrictions and protect patients, physicians, and employees from state interference in medical care, according to the Guttmacher Institute.

Tami Fitzgerald, the executive director of the North Carolina Values Coalition, said in a statement that the law was modest and important, according to the Times:

In any other medical procedure doctors would have a duty to disclose all of the relevant information, and yet a procedure as destructive and life-changing as abortion is held to a lower standard.

But Jennifer Dalven, the director of the ACLU’s Reproductive Freedom Project, said the law was much darker than a standard operating procedure. She said it was meant to impose judgments and beliefs not held by everyone on every woman seeking an abortion, according to ThinkProgress:

Doctors shouldn’t be forced to humiliate a woman and disregard their best medical judgment in order to provide an abortion. The purpose of this law was crystal clear: to shame a woman who has decided to have an abortion out of getting one.

Medical experts are also praising this decision by the Court. Mark DeFrancesco, the president of the American College of Obstetricians and Gynecologists, said in a statement that forced ultrasound laws “run counter to best medical practices,” adding that North Carolina’s policy specifically “violates the principle of appropriate informed consent,” according to ThinkProgress.

The Supreme Court is expected to decide soon whether it will hear cases with more sweeping challenges to abortion restrictions in Texas and Mississippi, according to the Times.