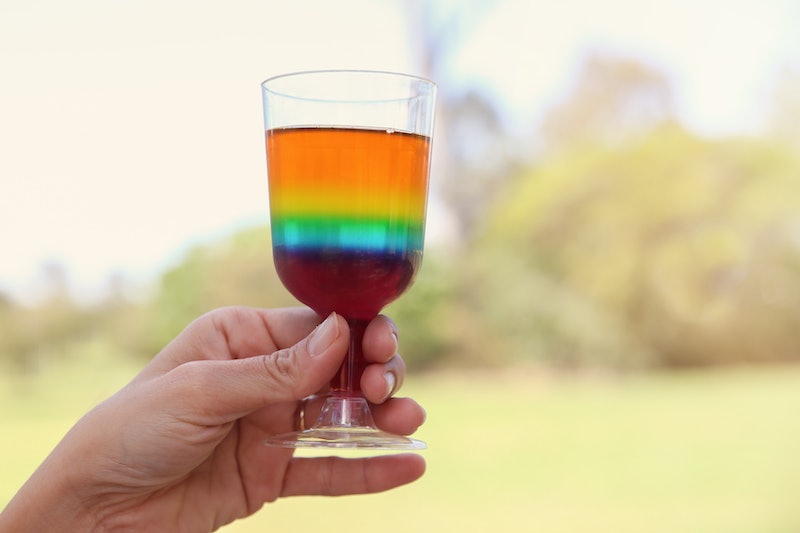 If you exist on the Internet, you might have seen the videos of Channing Tatum shaking what his mama gave him at the Los Angeles Pride parade earlier this month. That’s because June is Pride Month — and while you could celebrate by raising your rainbow cocktail, there’s just something about learning how to make rainbow Jello shots that just seems way more fun.

Of course, there’s no one way to celebrate. In less than two weeks, the LGBT communities and allies in New York, Chicago, and San Francisco will all get their turns to shake it. Ariana Grande (NY) and Shiny Toy Guns (SF) will be performing for partygoers, along with dozens of other acts. Chicago has events honoring The Village People, and even an "unapologetically gay" time-travel musical about Abraham Lincoln happening all of next week. NYC Pride has tapped Sir Ian McKellen as one of its four Grand Marshals this year — so I fully expect you all to tweet me Vines of Magneto getting his dance on.

Every year, the march (and the party) grows. Here is a small contribution to this year's Pride celebration, which you can enjoy even if you don't live in a city with an enormous parade.

Directions (as if you've never made Jello shots before):

1. Mix the blue Jello powder with 3/4 cup boiling water, then throw in a couple of ice cubes and stir, allowing the mixture to cool to around room temperature. Once no longer warm, add 3/4 cup liquor, and pour your first layer into each shot glass. Place shot glasses in the refrigerator to solidify (30 to 60 minutes).

2. Repeat this process with the green Jello mix, then yellow, then red, pouring each layer on top of the last, allowing each layer to solidify in the fridge before adding the next.

THEN DRINK THEM! Cheers!