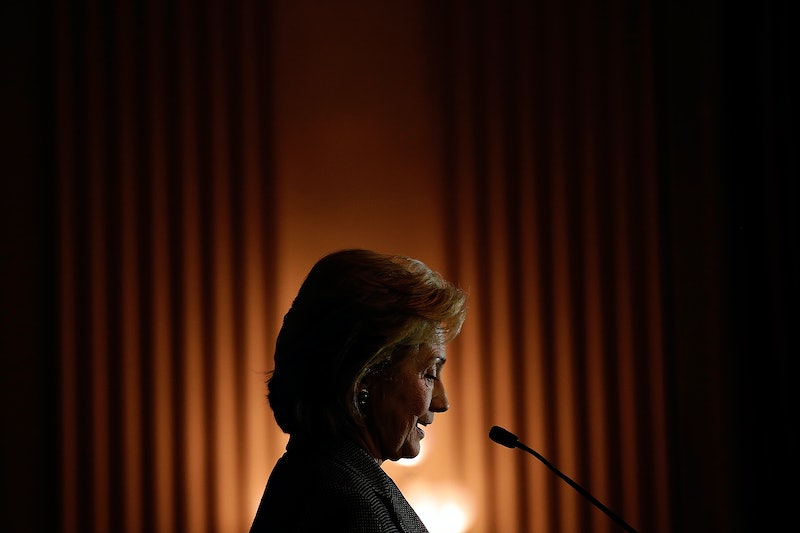 Whether you love her policies or loathe them entirely, there's no denying that Hillary Clinton is a pretty exceptional woman. Growing up in a home of right-wing and left-wing combatants and, later, following in the shadow of a U.S. president, the former secretary of state has never shied from the role of partisan peacemaker. Her failed 2008 White House bid launched a bevy of personal criticism into the arena as well — from complaints about her makeup-free face to absurd accusations about her weight — leaving the former FLOTUS exhausted as she entered the State Department the following spring. For all her apparent confidence and brusque GOP backhands, Hillary Clinton knows a thing or two about struggle and overcoming the weight of a nation's discontent.

With the ever-increasing push to win the youth vote, or at least co-opt the 40-and-under generations, candidates like Rand Paul, Marco Rubio, and Bernie Sanders are a vital option. With their flash-bulb charisma — or in Sanders' case, his brutally honest demeanor — and appealing anti-establishment verbiage, the three men all have the ability to draw in progressive and moderate-Republican supporters by the armful. But even with a famous last name and the oft-harangued "career politician" label slapped firmly on her campaign bumper, it would be unwise to discount Clinton from the competition.

As one of only a handful of top-tier female political candidates today, Clinton has almost certainly cornered the market on the young female vote. Even with a sordid media bramble situated like a thorn in her paw, she's viewed by many as their one last hope in an otherwise unappealing parade of older, white male candidates.

"Coming as a recent grad, working two jobs, three jobs to try to make a decent wage, it was really inspiring to hear that we have hope with her," 26-year-old Adriana Rodriguez told the International Business Times on Saturday, following Clinton's first campaign speech. Added 23-year-old Kayleigh Lynch, "[Her address] was so moving."

While critics blasted Clinton's stump speech as hypocritical and sparse on detail, the mood was unarguably celebratory — and much of that credit goes to Clinton herself, a woman who, despite a stumbled and sometimes-clumsy public relations campaign, has had more than her fair share of terrifically motivating and well-written moments. Here are a few of her most inspiring excerpts:

"There Is A Sense That Things, If You Keep Positive And Optimistic About What Can Be Done, Do Work Out."

In an April 2012 interview with Elle magazine, Clinton was prodded about her true feelings on her failed 2008 presidential bid — and perhaps less importantly whether she harbored any resentment of the president for his eventual win, to which she replied:

Running for president was the most extraordinary experience. I would have preferred it turned out differently, but even the outcome of it was what led to this experience here in the State Department.

"We Should Remember That Just As A Positive Outlook On Life Can Promote Good Health, So Can Everyday Acts Of Kindness."

She's not wrong either. According to author and chemist David R. Hamilton, the increase in dopamine and endogenous opioids in your system when you perform or witness an act of generosity can lead to deep relaxation of the nervous and cardiovascular system. That, in turn, can extend your life even if only by a little bit. So you should probably heed Clinton's words here. It's just good sense.

"Every Moment Wasted Looking Back, Keeps Us From Moving Forward. … In This World And The World Of Tomorrow, We Must Go Forward Together Or Not At All."

While it would have been easy enough to sit back and rest on her laurels, Clinton refused to back down from a challenge, even when confronted questions surrounding the Benghazi attack that threatened her tenure as secretary of state. Whatever happens in 2016, at least she'll be able to say that she gave it her all. Let that act as a metaphor in your own life, and you'll never regret anything again.

"Take Criticism Seriously, But Not Personally. If There Is Truth Or Merit In The Criticism, Try To Learn From It. Otherwise, Let It Roll Right Off You."

In her 2004 memoir, Clinton specified the need to understand productive criticism as a gift, rather than a deterrent. With her years in the spotlight, it might have been simpler to take anything that's not a gleaming review to heart. But if anyone knows when to shoulder the burden and move for change and when to dust off comments about hair and makeup, it's Clinton.

"You Know, Everybody Has Setbacks In Their Life, And Everybody Falls Short Of Whatever Goals They Might Set For Themselves. That's Part Of Living And Coming To Terms With Who You Are As A Person."

Whether you're 9, 19, or 97, there's always room for growth. Falling down doesn't mean failure, as Clinton so eloquently stated. Be bold and get up again — you'll make her proud.