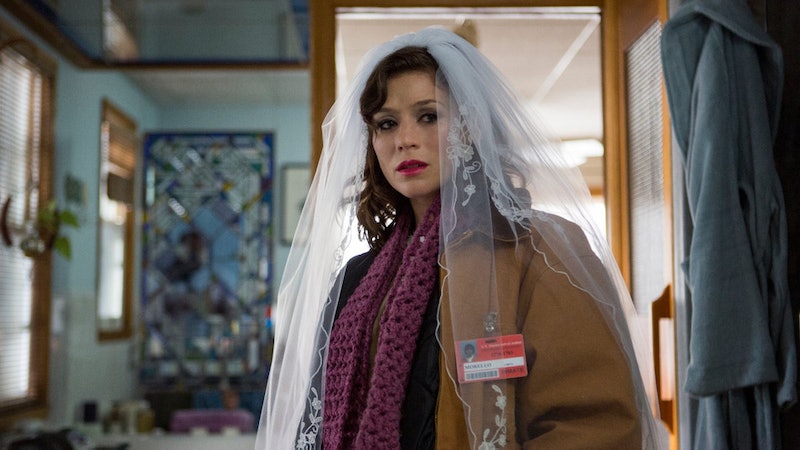 Orange is the New Black's Lorna Morello has come a long way in Season 3. For those who have marathoned the new season this past weekend on Netflix, you know that our favorite lovelorn inmate goes from creepy stalker to blushing bride. Seriously, Morello finally gets married in OITNB Season 3, and the wedding is a thousand times better than her fantasies with pseudo-fiance Christopher, even if it did take place in jail. During Season 3, Lorna met and fell for Vince Muccio, a man who finally respects, loves, and appreciates her, and that's like hitting the jackpot in itself.

After Nicky got sent away, Lorna became very lonely without her right hand woman. But, this time, instead of reverting back to her stalker tendencies, she began courting Internet admirers, or as I like to call it, "prison visitation speed dating." She found a lot of duds, but ultimately, she found her prince in Vince. I mean, she got him to make his boys to beat up Christopher for her — and that's some old school prison love right there.

Lorna has gone from breaking into Christopher's house and reenacting the Alanis Morissette song "Your House" to proposing to and marrying for Vince.

And it's all of that that makes their simple prison wedding so much better than anything she could've had with Christopher, who was so not into her. Here's why I think Vince is a much better match for Lorna and why their nuptials were more perfect than her imaginary romance with Christopher.

1. They Love Each Other

While Lorna had a few awkward moments with her other suitors, she and Vince fell in love fast. "I got crazy feelings for you. Pauly D-JWoww 2010 kind of feelings," Vince tells her by the Season 3 finale. Now that's a Jersey Shore declaration of love that only Lorna could appreciate.

Not only did she pop the question, but he found it hot to be asked by a woman who knows what she wants. And he said yes, calling her the most amazing woman he's ever met. Awww.

3. He's Willing To Accept Her For Who She Is

Sure, Lorn's in prison currently and, at first, Vince was hesitant to pursue the relationship because of that. But, with some convincing, he was willing to make it work. After all, she won't be in Litchfield forever.

4. The Wedding Was Simple

No dresses, long guests lists, or large wedding parties. The bride only wore a veil (which we know she has a thing for). The only other folks present were the groom, Red, Healy, and the love in their eyes (maybe Red and Healy had that love, too, but the jury's still out on that couple). That's all Lorna and Vince really needed to make the day so special.

5. The Vows Were So Sweet

Before the "I Dos," Lorna and Vince read vows they had each written. "Lorna, I cannot believe we are doing this," Vince read. "We fit, and we match and I think you are beautiful... and you make me feel tall... I cannot wait to spend every day that I am allowed to with you, and then when you are out, just every day."

As for Lorna, she read the lyrics to a song by Vince's favorite song: "I Wanna Know What Love Is," by Foreigner.

6. And They Consummated The Marriage Very Publicly

Wedded bliss doesn't get private conjugal visits at Litchfield, so the couple had a very public wedding night. But, they're so in love they didn't care. The guards just put headphones on.

Congrats, Lorna and Vince. May your marriage continue to flourish in Season 4.