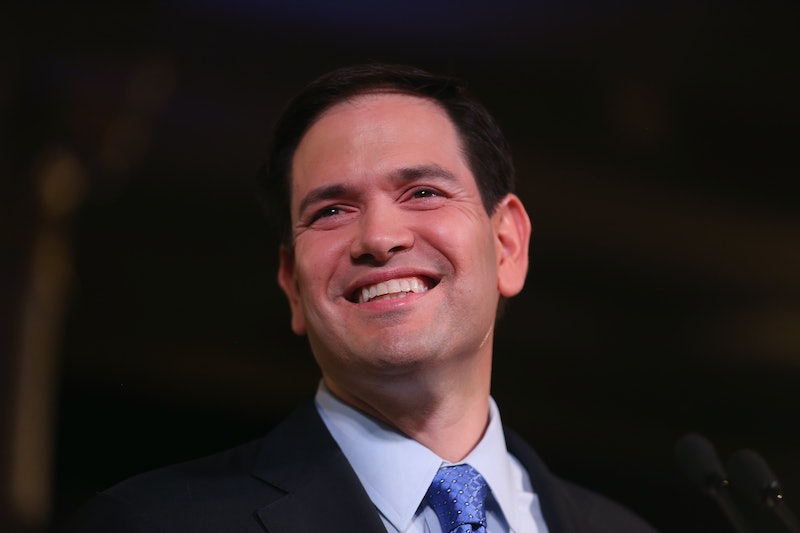 In what is shaping up to be a very jam-packed 2016 presidential race, candidates are doing anything they can to make themselves stand out. In 2015, that means utilizing various forms of social media to appeal to the masses, particularly younger voters. While every candidate regularly uses the main social platforms, like Twitter, Facebook, and Instagram, Marco Rubio has a Pinterest page, proving that perhaps he's more willing to think outside the box than his contenders. Currently I believe he's the only 2016 candidate on Pinterest, but his pinning game is strong enough that the others might not be too far behind.

If you think about it, Pinterest boards are the perfect outlet to display supplementary campaign materials in an easy-to-navigate, pleasing-to-the-eye medium. Instead of peony bunches and DIY wedding veils, Rubio's Pinterest is full of pictures of his campaign trail, graphic logos, platform slogans, and even inspirational quotes. OK, maybe not inspirational, but quotes nonetheless. Rubio has clearly spent a few nights browsing Pinterest in the wee hours.

So, what's on Rubio's page exactly? His Pinterest bio is his campaign tagline: "Are you ready for a New American Century?" And under that are eight Pinterest boards: Social Media Profile Images, Marco In The News, Marco On The Issues, Marco's Videos, Marco's Quotes, Pictures, New American Century, and Announcement Day. Some boards are clearly better curated than others, but overall, Rubio's Pinterest game is strong. Here are Rubio's best pins.

Marco On The Issues

Rubio sums up his platform in three bullet points.

ISIS fighters already scary enough as they are, but Rubio makes them look terrifying.

One of Rubio's main arguments is that no other issue matters if America is not safe from foreign threats.

Here it is: a montage of Rubio's New American Century ideals set to emotional piano music.

Apparently, Rubio is father and husband of the year.

I love the literal graphic translation of Rubio's quote here.

Of course, one of Rubio's quotes has to be a Hillary burn. Yawn.

This board is mostly snaps of Rubio hitting the campaign trail, meeting regular Americans.

Here it looks like two men are sharing an inside joke and Rubio wants in... desperately.

Here Rubio inexplicably hopped onto the window sill to give a speech in someone's living room. Everyone is extremely confused.

It's Rubio's world and we're all just eavesdropping on it.

This board is where Rubio juxtaposes his New American Century ideology with the antiquated ideas of other politicians...

Ideology aside, the board is also a place to announce flash sales on t-shirts.

Is this photo shot from below to make Rubio appear taller?

All of the photos from Rubio's announcement day portray him to be an affable, likeable guy.

Except for this one, in which his own wife looks really uncomfortable to be in his clutches.

More like this
The Best Memes & Tweets From The 2022 Met Gala
By Olivia Rose Ferreiro
8 TikTok Pasta Recipes To Try Out At Home
By Emma Garza
Prince Harry Spoke Out About Archie & Lilibet’s Futures And What Worries Him The Most
By Sam Ramsden
On TikTok, Miley Cyrus’ “Malibu” Is The Soundtrack Of Growth
By Courtney Young
Get Even More From Bustle — Sign Up For The Newsletter