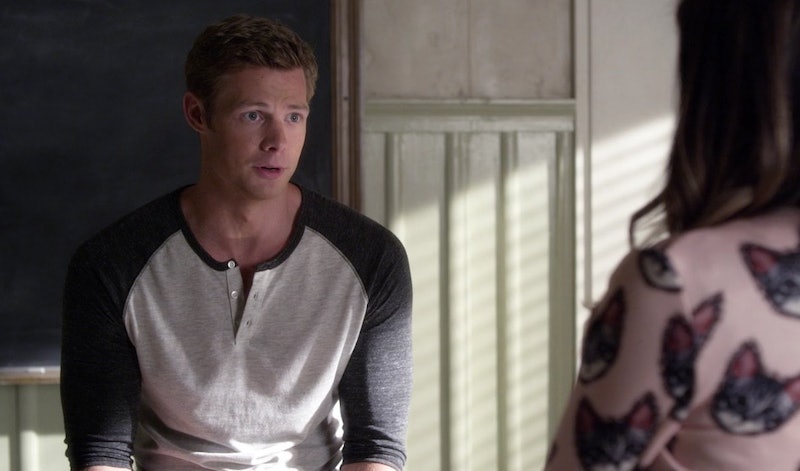 Have you ever heard the phrase, you have to be careful of the quiet ones? Well, when it comes to Pretty Little Liars, I guess you actually have to be careful of the quiet ones introduced in Season 3, who then come back in a much louder way and may or may not have ties to A. At least, that's the case when it comes to Andrew Campbell, Pretty Little Liars' biggest mystery right now. Just who is he working for, and what exactly is he doing? The fact that this isn't the first time we're seeing him makes him even more suspicious, sure, but his past appearances can also give us insight into this character. Let's take a look at past seasons and see if we can find any Andrew clues on Pretty Little Liars , because for all fans know, we're missing something huge.

Between Seasons 1 and 5, Andrew was only in 10 PLL episodes. I know it doesn't seem like enough, considering how he's a focal point of the show right now, but that's the truth. We first met Andrew in Season 3, when he appeared in two episodes. In Season 4, he was actually only featured in one episode. It wasn't until Season 5 that we hit an Andrew renaissance, when suddenly he was everywhere, romancing Aria and being super creepy. Here's what we can learn from his PLL past.

The above is an actual screenshot from the very second we first see Andrew on PLL. As you can see, he is wearing a button-up shirt, tie, cardigan, and Harry Potter-esque glasses. And now we think this guy is A?

He's in charge of the Decathlon team, and works as the mediator between Spencer and Mona when they both compete for Team Captain. Andrew also appears to be terrified of both Spencer and Mona. He does, though, tell Spencer to "spank" Mona during their quiz-off, which is even more disturbing now than it was back then.

Season 3, "What Becomes Of The Broken Hearted"

The next time we see Andrew, he's kicking Spencer off the Decathlon team. He says, "war is a game that has to be played with a smile," quoting Winston Churchill. Then out of nowhere, the two of them play an intense game of strip-quizzing. Andrew is way too into Spencer removing her bra from under her shirt.

After disappearing for the remainder of Season 3, and for 18 episodes of Season 4, Andrew returns to be a study buddy for Spencer. Oh, he's also there to give her drugs. This is the return of Spencer's drug addiction, which is largely supplied by Andrew.

Here's the thing, though. When Spencer seeks Andrew out for the pills, she says, "I didn't ask you here to study." And immediately, I assumed that Andrew was thinking she wanted to hook up with him. She then followed it up with, "I've been watching you," and I figured Andrew was again getting excited to get sexy with Spencer.

But now, two seasons later, I find myself looking at Andrew in a very different way. Maybe he's not thinking about perceived sexual tension. Maybe he's thinking, "Oh no, Spencer has caught onto the fact that I'm watching her and now she's watching me." Knowing what we do now about Andrew, every interaction he had with Spencer during her relapse is extremely suspicious.

Season 5, "Thrown From The Ride"

Time for Season 5. When we first saw Andrew again, he asked Spencer if she was doing OK, aka he wanted to know if she was still struggling with her addiction. Spencer then asked Andrew to help her mom do yardwork, Andrew proposed that the two of them makeout, and Spencer was like, "no." Good call, Spence.

Later Andrew said, "shouldn't your mom be more freaked out about what's going into the ground, than what comes out of it?" Hmm. Then after finding a dead raccoon, he warned Spencer, "don't get too close, sometimes when they think they're in danger they play dead." HMMMMM, REMIND YOU OF ANYONE???

After that cryptic exchange, Andrew disappeared for 14 episodes. He came back when Aria started cheating off his math test, which lead to him hitting on her — a lot — before they cozied up. This episode also made it clear that Andrew has clearly been working out a lot, because his muscles were bursting out of his shirt. We get it, Andrew.

Andrew drove the Liars' getaway car to follow Mike to his meeting with Cyrus. He gave the girls a lot of suspicious looks, then scared Cyrus off with a baseball bat. Pretty convenient how he was there to save them, and isn't afraid to use violence to intimidate others, huh?

More Andrew studying with Aria. At this point, I started to find myself really attracted to the evolution of Andrew, and I now realize that was a bad thing — I fell right into his trap.

This is the episode that finds Ali in jail. In the meantime, Aria forget about her study date with Andrew, and when they talked about it later, he described a movie he wanted to see with her. "It's a thriller about getting messages from a shadowy figure who knows everybody's secrets," he said. "Wild stuff, right?" SUSPICIOUS, ANDREW. HIGHLY SUSPICIOUS.

Season 5, "The Melody Lingers On"

"Vicious." That's how Andrew described Mona in this episode, before mentioning that, "the only thing Mona likes better than winning is taking the credit." Aria was confused, and Andrew continued insinuating that he's happy Mona is dead.

Here's the thing. As coded as that exchange now seems, if Andrew was A, at this point he'd still have been keeping Mona alive somewhere, which doesn't quite mesh with his comments on her death. Unless, of course, this is all a front.

Andrew was a little bit upset that Aria asked Ezra to take care of Mike rather than him. He insisted that he was there for Aria, "24/7." Maybe he meant it a much creepier way than we originally thought. However, Aria didn't pick up on any hidden meanings if they were there, as this exchange ended with the two of them kissing.

This episode also includes Ali's trial, and Andrew "mysteriously disappears" the night before her big courtdate — the same night when Ezra and Caleb were shot at with bow and arrows and Mike was attacked at a pathfinder camp. Shortly after the three guys escaped, we learned that Andrew is a pathfinder scout. What a coincidence!

Season 5, "Welcome To The Dollhouse"

Ah, the Dollhouse episode. The only time we saw Andrew, he was creeping on a phone call between Mrs. Hasting and Melissa. Everyone freaked out.

This is what Andrew had up on his computer during the phone call (the background is some random math homework), so clearly he was tapping Veronica's phone, but for what reason we're still not sure.

So in conclusion, is Andrew A? When you look at all of his past appearances, there are signs pointing to both his guilt and innocence in Charles' plan. The only I know for certain after watching his 10 PLL episodes is that my crush on him is a little big bigger. For more on Andrew's involvement in the A game, check out Bustle's Pretty Little Liars podcast below.