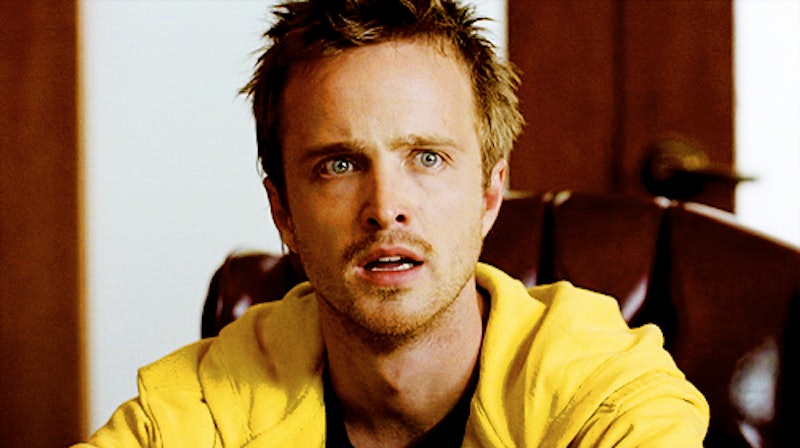 UPDATE: Aaron Paul confirms the Breaking Bad spinoff centered around Jesse Pinkman was a joke via Periscope. He said, "Please accept my apology" to his fans, adding: "You guys are so mad at me!" To remedy his actions, Paul invited fans to see Mad Max with him, recording the message as he's walking to the theater. "10:40, Mad Max, Regal Cinemas, let's do this," he said, concluding: "I'll buy you tickets, and maybe even popcorn. Peanut M&Ms..."

Everyone, hold onto your butts! Breaking Bad fans had a minor meltdown Monday evening when actor Aaron Paul posted a special surprise for fans on his Periscope account. While I didn't catch the message in time (it times out so you have to tune in at just the right time to view the message) apparently, according to the interwebs and twitter gods, Aaron Paul announced a Breaking Bad Jesse Pinkman spinoff. You heard that right. A few days ago, the actor posted an Instagram of a plate with the word, "congratulations" scrawled across it. The caption reads: "Can't wait to tell you what this is all about. It's top secret for now but you all will know soon enough. It's a new gig that I am over the moon about. Thank you angel for sending this to me from across the country. Love you lots and lots."

And on Monday afternoon, Paul tweeted that a special announcement was forthcoming. He then tweeted a link to his Persicope account, where I assume the announcement of the Breaking Bad spinoff centered around Jesse Pinkman was revealed. But don't get excited just yet. About 12 minutes after the alleged big reveal, Paul posted another message. It reads:

Well, that's disappointing. Assuming the joke was about the possible spin-off, he's sure to have a few upset fans on his hands, considering how excited they were when he supposedly announced the news, just minutes earlier.

And tweets from disappointed fans have already begun to filter in:

Let's all take a moment of silence for what could have been. And who knows, maybe Paul's joke that it was a joke was a joke! Maybe...

More like this
'The Undeclared War' Took Inspiration From This Gavin & Stacey Location
By Maxine Harrison
'The Undeclared War' Is A Must-Watch For 'Black Mirror' Fans
By Maxine Harrison
Don't Expect To See Your Fave Modern Royals Depicted On 'The Crown' Season 6
By Jack Irvin
At 14, Kate Berlant Had A Wheelie Backpack & One Line In 'Lizzie McGuire'
By Samantha Rollins
Get Even More From Bustle — Sign Up For The Newsletter