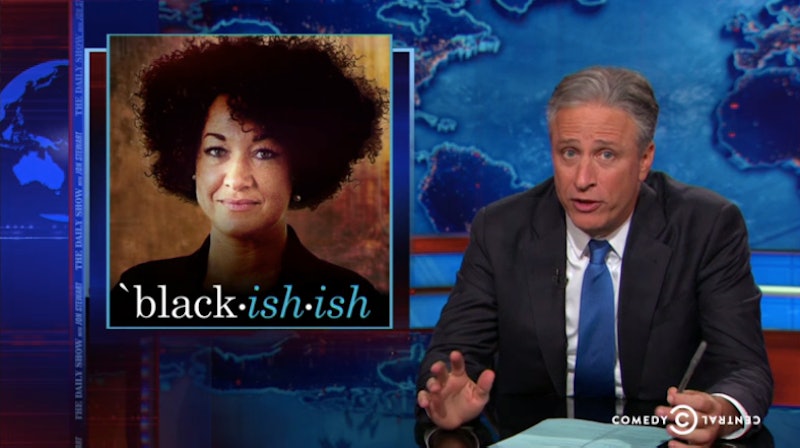 The Daily Show airs Monday through Thursday, which meant comedian Jon Stewart was squarely out of the conversation when news broke Friday that NAACP chapter president Rachel Dolezal, who is white, had represented herself as a black woman for a decade. But the story escalated well into this week — Dolezal resigned from her post Monday and is set to give her first interview Tuesday on Today — and that let one much needed voice chime in. During Monday's episode, Stewart mocks Rachel Dolezal and conservative pundits for mistakenly allowing one woman become a driving point in a discussion on race.

In a new segment titled "Whaaaaaaaat!?" Stewart breaks down the media circus surrounding Dolezal. After he puts aside his initial surprise that there's even a NAACP chapter in Spokane to begin with, Stewart points out the "white" makeup of Dolezal's heritage, a mix of European countries, according to her parents Larry and Ruthanne. Stewart then slides in a great reference to the 1995 fantasy drama Powder, which follows a telepath with ghostly skin trying to figure out what it means to be human.

Whaaat?! Czech, Swedish, and German is really f*cking white. Even Powder is like, "That's one white lady. That's a white lady. She's white."

The next bit captioned "Black-ish-ish," a nod to the hit ABC family comedy, plays the infamous KXLY interview, during which Dolezal flusters when asked directly if she's "African American."

So her mouth says, "I don't understand the question." But her eyes say, "F*CKKKKKKKK!"

Naturally, the story should end there, or so Stewart says. But of course, someone must take the "singular incident" and force it to become part of the "exhausting 24-hour-Benghazi-Obama-phone-culture-war-dog whistle-who-gives-a-f*ck-a-tron" news cycle. In this case, Stewart squarely targets conservative pundits — you know, those heavily right-leaning folks — who have used the Dolezal story to attack liberal media and question whether racism could still be alive if a white woman so visibly wants to be black. Well, consider this:

If being black is such a sweet deal, why are millions of white people ignoring this once in a lifetime opportunity?

Stewart is then joined by two senior "black" correspondents — Jessica Williams, a black woman, and Jordan Klepper, a white man — and their fun banter points to the more serious ramifications of Dolezal's actions. Williams argues rapper Iggy Azalea may have appropriated black culture and music to make money, but she wasn't trying to fool anyone into thinking she was actually black. Which is why, according to Williams, Dolezal is much worse. Dolezal didn't need to be black to be a strong civil rights activist, and her decision to take on the black experience as her own actually did a bigger disservice to the community she pledged to help.

We don't need oppression cosplay. We need allies, not replacements.

More like this
The David Beckham Qatar Controversy, Explained
By Sophie McEvoy
Footballer Jake Daniels Shared His Thoughts On A World Cup Boycott
By Sam Ramsden
Here's The Role Lady Susan Hussey Played At Buckingham Palace
By El Hunt
Kim Kardashian Is “Disgusted & Outraged” By Balenciaga Ads
By El Hunt
Get Even More From Bustle — Sign Up For The Newsletter