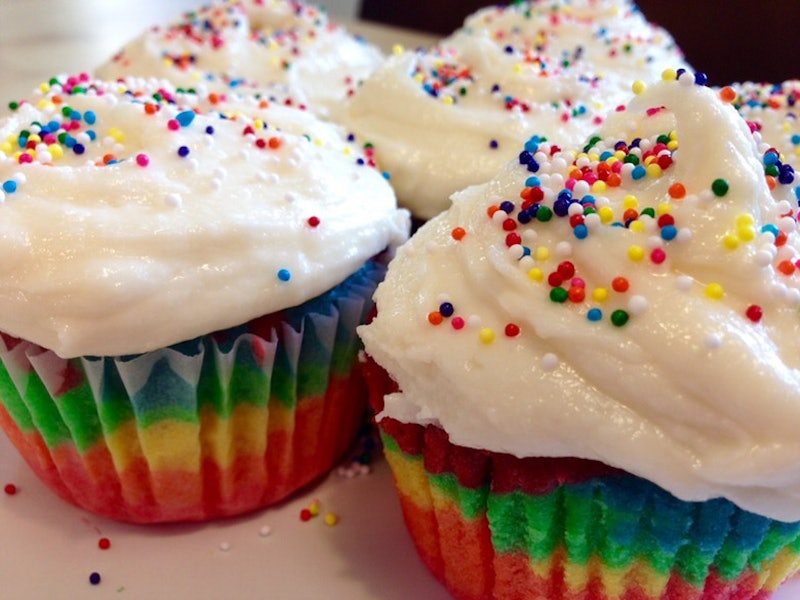 If ever there was a time to learn how to make rainbow cupcakes, it's now. This year's Pride Month celebrations mark the 46th anniversary of the Stonewall Riots in New York City — considered by many to be the catalyst for modern-day LGBT rights activism. This month is also a reminder that there is still work to be done in ensuring civil and human rights within the LGBT community, both nationally and abroad. As official Pride Month celebrations continue throughout the world until the end of June, let your tastebuds take part in the festivities with these Pinterest-worthy pride cupcakes. And then, because this party is just getting started, whip up a rainbow cocktail and toast to equality. We can all cheers to that.

I chose to make my own batter using a basic vanilla cupcake recipe adapted from Martha Stewart, and a vanilla buttercream frosting recipe I found on Food.com. No time to go completely homemade? These cupcakes can also be made from a white cake box mix and store-bought vanilla or cream cheese frosting.

After you've assembled cupcake pans with liners and pre-heated your oven according to recipe directions, it's time to start coloring. Remember to purchase red, yellow, green, and blue dye, as the cupcakes will have six layers complementing the ROYGBIV rainbow sequence, with the exception of indigo — but feel free to include it if you'd like.

Separate the batter evenly into six bowls, and distribute and mix the dyes until you get the desired vibrancy. This may take around 10 drops of dye for some colors.

Beginning with one colored layer at a time — I began with red — measure out a teaspoon of batter into the cupcake molds. Continue with each color, spooning the batter on top and layering. There's no need to spread the batter after each layer; the oven will take care of filling any gaps of color.

Bake according to the directions of your recipe, and let the cupcakes cool for at least an hour before frosting. Since I haven't mastered how to make rainbow buttercream, I topped my vanilla frosted cupcakes with rainbow sprinkles. Now, who has the recipe for that?