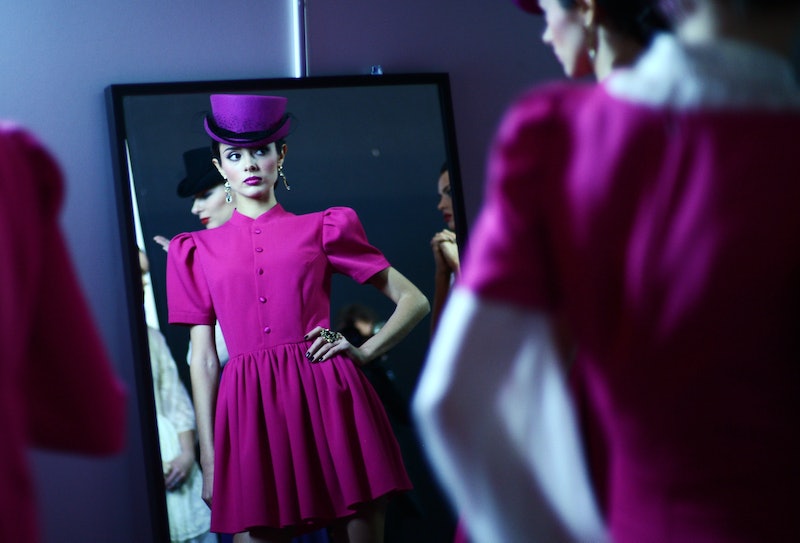 Body Dysmorphic Disorder, or BDD, is defined by the Body Dysmorphic Disorder Foundation as, "The preoccupation with one or more perceived defects or flaws in appearance, which is unnoticeable to others." A lot of us will read that and think, "that just sounds like being a woman," but the perception of one's own physical unattractiveness haunts the two percent of the population with BDD to a much greater extent. What's it like to live with BDD? Some interviews recently published on BDD patients' relationships with mirrors shed some light on the subject, and they're well worth a read.

Researchers at City University London discussed mirrors with ten people suffering from BDD and published the interviews' main takeaways in the Journal of Health Psychology. Participants were given cameras and notebooks to take pictures of themselves to use as aids during the interview process and record their feelings. They summarize their results:

Overall, participants described mirrors as being controlling, imprisoning and disempowering forces that had a crippling and paralysing effect on life.

Many people can relate to feeling like mirrors have a certain kind of power; indeed, one study conducted in 2012 found that women look at themselves in the mirror 38 times a day on average, and many women even advocate "mirror fasts" to free themselves of the grip mirrors hold on their self-esteem. However, the difference for those suffering from BDD is the "crippling and paralysing effect on life" part: According to the Anxiety and Depression Associate of America, a flaw, which may be real or percieved, is "significant and prominent, often causing severe emotional distress and difficulties in daily functioning."

The common themes that emerged during the interviews drive home what it's like to live with BDD. The full article can be read for free online, which I highly recommend doing; in the meantime, here are five of the main takeaways:

I feel you, participant by the name of Jane. Mirrors are in houses, restaurants, stores, cars... you can't get away from them. Even if you plan to become a druid and live out your life among only forest creatures, there's still your reflection glaring back at you from the water. With so many opportunities for self-scrutiny, it can become a compulsive, almost involuntary behavior. Jane writes:

F— knows why you do it. I really can’t explain to you why I have to look in the mirror so often… There was one time when I stopped counting at like, I think it was about 68 times, and it was just sort of like, and at that time I wasn’t even planning to leave the house.

2. Not all mirrors are created equal.

Another subject, Hannah, said she can't "trust mirrors other than the ones I feel are my old stalwarts," also known as "mirrors of truth." While most of us may see other people's reflections as basically the same no matter what mirror they're reflected in, it's common to see slight distortions in our own size as prominent enough to make or break our appearances. That's why some retail outlets install flattering mirrors so that shoppers think they look thinner in the outfits they're trying on. We may not call them our "stalwarts," but that's pretty much what they feel like.

3. Mirrors can also alleviate paranoia that something is "heinously wrong."

BDD patients, like many of us, have a love-hate relationship with mirrors. While mirrors can bring down their spirits, they can also lift them up if it's a good mirror on a good day. The hope that today will be a good mirror day is perhaps what keeps people with and without BDD checking mirrors constantly: They have the "optimistic belief that somehow things will change," as Hannah puts it.

Suffering from BDD goes beyond a mere dissatisfaction with one's appearance; many even ascribe moral characteristics to the images they see. One patient, Chris, said he sees Spongebob Squarepants when he looks in the mirror and it makes him "want to vomit." Hannah described herself as a monster, "like people in movies when they kind of make them up and it’s like I should be groaning." Jane goes as far as to fear that her appearance offends other people: "How are people my friends? How don’t people throw up every time they see me?" Few people would say something this harsh about other people, which shows that there's more going on than just visual perception. Another patient, Lucy, said:

Everyone else, everyone is beautiful. I just feel that I am that one ugly person, and I am with all those people who like say, the Tree Man or the Elephant Man, I am in their league… I see myself as lower than everyone else. Basically, I should be with the freak show... because I remember always watching those films and they had that really big fat lady and I think that should be me.

One of the failings of our society is the deeply-ingrained tendency to equate "ugly" or "fat" with "lowly." Not only that, but we also frequently direct a different type of perception toward those that we think fit those descriptions, making the perceptions held by people suffering from BDD about so much more than appearance. Seeing oneself as "ugly" may reflect "an extrenalisation of 'inner' ugliness," speculate the authors

5. Alice isn't the only one who fell into a mirror.

Several BDD patients used terms like "stuck" or "trapped" to describe looking in mirrors. "When I look in the mirror I can’t go again until I’ve kind of made peace with the picture that I see there, so sometimes that can just take a couple of minutes, five minutes, ten minutes like anybody would," said one patient, Louise. But sometimes that conclusion never comes: "It’s an increasing feeling of desperation wanting to get away and you just don’t, you can’t reach that point of consensus with yourself of thinking you look OK."

One thing Louise has figured out that a lot of us with or without BDD can learn from is how to use "tools" to pull herself out of the mirror. She keeps scissors to dig into the table to let out her frustration, a timer to limit her mirror time, and a star that says "believe" to remind her of "the positive things" that many of us lose sight of when we get lost in the mirror.