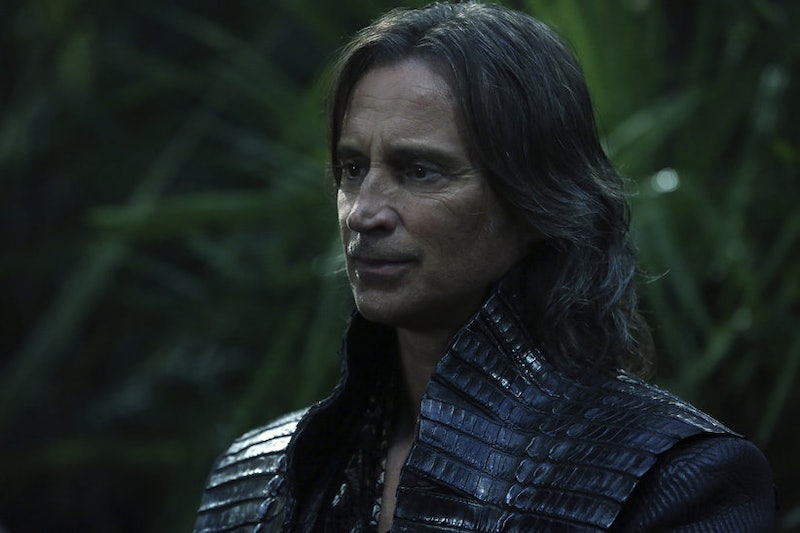 Let it henceforth be known that Once Upon A Time has the power to make us gasp while pulling off an impressive plot twist with ease. After seven episodes of seemingly boring backwards action in Neverland, ABC's fantasy hour threw viewers for a pleasing loop before going on a two-week hiatus. (The American Music Awards are airing next weekend.) What's the twist? Well, Peter Pan is Rumpelstiltskin's father... and he's officially the show's worst father (on a ranking that includes Rumpel himself).

On Sunday night, viewers were finally given huge insight into why Rumpel grew up to be the most deplorably evil man on the planet, and the reveal didn't disappoint. His "papa," Malcolm, was an unemployed, gambling drunkard who hopelessly wanted to stay young forever. (Also, Malcolm has a laugh terrifyingly similar to Robert Carlyle's.) Poor Rumpel — the character who was clearly the adult in this father-son relationship didn't stand a chance at having a positive role model with this guy around and no mother. Even with no money to his name, Malcolm lied to Rumpel about going to find a job, leaving him sitting alone in the town square while he gambled and drank himself under a table at a pub. (Cheers for excellent parenting.)

It's during his free time as a wandering eight year-old that Rumpel is given one of the mystical, magic porthole-beans and instructed to use it to start a new life for himself, far away from his father. Like any good adolescent, he can't bear the idea of leaving his father behind because of course he loves him even though he's a loser. So Rumpel tells Malcolm about his magic bean (which he first tries to sell) and then comes around by telling his son that they can use it to get to Neverland.

First plot twist: Malcolm has been to Neverland before in his dreams. (So, apparently, Neverland is truly as old as the hills.) Rumpel's dear old dad knows all about pixie dust, flying, and "believing," so we already know how this is going to go. Neverland is a lazy, dead-beat dad's dream where they can just wish for anything and never have to do a minute of work. Or at least, so Malcolm believes.

He and Rumpel head out on a quest for pixie dust after he embarrasses himself by trying to fly (aka jumping off of a rock and falling flat on his face). When they finally make it to the "pixie dust tree," the real fun begins (and by "real fun," I mean the saddest thing you've seen on TV in a long time).

Malcolm first tries to get Rumpel to climb the tree (again, lazy) even though he's scared of heights. When he finally relents, he agrees to climb the tree and bring down enough pixie dust for them both (lie). So papa climbs the tree, gets his pixie dust, and wishes to fly — but it doesn't work. The Shadow, voiced by Marilyn Manson (!!!!!), appears to tell him that the pixie dust isn't working, because he's not believing hard enough. The Shadow also reveals that Neverland is not a place for grown-ups, so Malcolm will have to leave or sacrifice the one thing holding him back. He flies away with Shadow-Manson and when he returns, we find out that the "one thing holding him back" is his own son. And guess what? He's ready and willing to get rid of him in exchange for eternal youth. Malcolm literally allows Shadow-Manson to rip his son away because "a child can't be a father," and it's as simple as that.

Cue the transformation. In a whirl of smoke, Malcolm becomes Peter Pan. So, basically, rather than agreeing to complete an honest day's work, be a good role model, take care of his child, or care about anyone other than himself, Rumpelstiltskin's papa chose to turn into the virulent and sociopathic Peter Pan that killed his own great-grandson Sunday night to maintain his youth and power. "Shittiest Dad Ever"? Yes, yes, and yes.