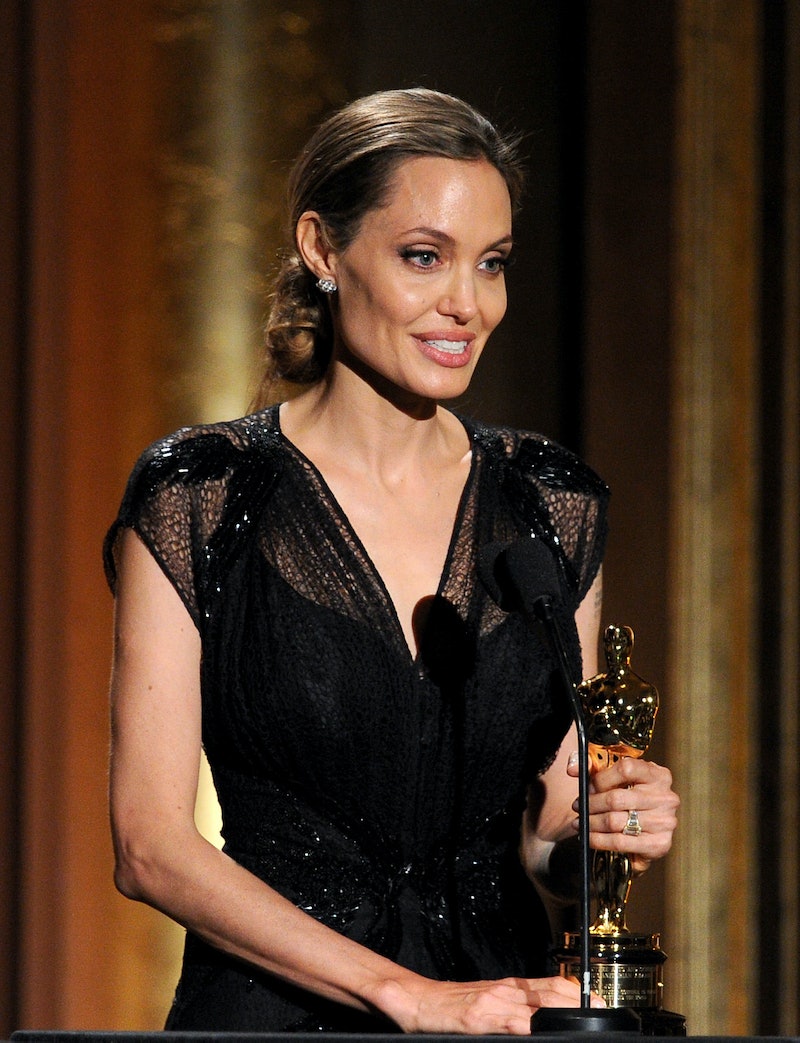 "Suck it, haters!" This was basically the gist of Angelina Jolie's speech at the Governors Awards last Saturday, just, you know, a bit more eloquent. While accepting the Humanitarian Award on Nov. 16, Jolie gave a speech that was so heartfelt and affecting that even the actress's biggest detractors would've struggled to find anything to critique.

Jolie began the speech by thanking her colleagues, friends, and family, and it was the latter that made our hearts swell for the first time. To fiancé Brad Pitt: "My love... your support and your guidance make everything that I do possible." To son Maddox, also in the audience: "Mad... and you and your brothers and sisters, there is no greater honor than being your mom."

And it only got more emotional from there. Jolie shared memories of her late mother, Marcheline Bertrand, who died of ovarian cancer in 2007. Jolie credited Bertrand for always being supportive of her children's careers, driving Jolie to auditions, celebrating her successes, and, most importantly, giving her daughter the advice that "nothing would mean anything if I didn't live a life of use to others."

Jolie then began to talk to about her experiences as a humanitarian, which she said have made her realize how fortunate she is to live a life of privilege.

"I realized how sheltered I had been, and I was determined never to be that way again," she said.

Jolie ended the speech with a comparison — her life, one of health and happiness and luxury, to the life of a woman in a refugee camp, whose problems and decisions are greater than any Jolie will likely ever know. She finished with a profound statement:

I don't understand why this is my life, and that's hers. I don't understand that, but I will do as my mother asked, and I will do the best I can with this life to be of use, and to stand here today means I did as she asked. And if she were alive, she'd be very proud.

Jolie was far from the only one choking up at the end of that emotional speech. If any of the actress's haters were watching, it's doubtful they stayed critics for long; it was obvious to everyone that Jolie's statements and emotions were sincere. And how could anyone hate someone who cares about the world as deeply as she does?

Jolie isn't the only controversial celebrity to give a speech that likely changed her perception by the public. Four others:

In early November, Taylor Swift accepted the Country Music Awards' Pinnacle Award, honoring her lifelong achievements in country music — yes, she's only 23. It was an enormous honor (the award's only been given out twice in the show's history), and Swift took it seriously. In her speech, given after dozens of people, ranging from her peers in country music to her entertainment idols, expressed their admiration for the singer, Swift seemed genuinely overwhelmed with emotion. It was a big contrast to her usual "I'm so shocked!" reaction to awards, and it proved to critics that even at this level of fame, Swift is capable of being humbled.

"My parents are not just crying, they're actually bawling at this point," she said early on, as the camera panned on her clearly proud parents, who were indeed wiping away tears.

Swift then thanked each one of the country stars who presented her with the award, sharing sweet, personal memories of her experiences touring with them years before. She also acknowledged her family, her label, and her fans, before finishing with a choked-up "you've made me feel so special right now!"

Anne Hathaway's speech at this year's Academy Awards was much more toned-down than her Golden Globes acceptance speech, and that was a good thing. Hathaway was already not in the public's favor by early 2013 — she had praised her own Les Mis performance, complained a lot about losing weight, and got a very controversial pixie cut — so her final speech of awards season needed to be good. Thankfully, it was.

At least, after the first minute or so. Hathaway began the speech by murmuring "it came true...", which didn't do much to quell the criticism that she still acted surprised every time she won an award for her clearly award-winning performance. She then went on to thank a loooooong list of people, even mentioning some guy twice.

Yet by the end of the speech, Hathaway was quaking with emotion.

"Here's hoping that some day in the not too distant future, the misfortunes of Fantine will only be found in stories and never more in real life," she said, and even Hathaway's biggest critics couldn't deny that she meant every word.

This speech is notable for the simple fact that KRISTEN STEWART SHOWED EMOTION. For one of the only times in memory, the typically-aloof actress actually seemed excited to be on-stage. She smiled, laughed, shouted, and addressed the audience with "Dude!" and "Yo!"

Sure, the speech was kind of disjointed, with Stewart first talking about her love of Nickelodeon (Rocko's Modern Life is a nighttime staple, apparently) and then quickly bringing up a shirt she wore in Kindergarten that said "kick butt first, take names later."

"I feel like I finally realized my Kindergartener self," she said.

Wait, what? Structure and meaning of the speech aside, the point is that Stewart seemed genuinely happy to be there.

Sure, much of the hate for the actress didn't come until later in the decade, but even in 2007, people were starting to get annoyed with Heigl and her "I didn't feel I was given the material to warrant a nomination" attitude — even a year before the famous quote was said. Yet at the Emmy Awards, when the Grey's Anatomy star accepted her award for Best Supporting Actress, she seemed truly grateful to be there.

"My own mother told me I didn't have a shot in hell of winning tonight," she said, before remembering that her poor mom was in the audience. "Though she's a really big supporter! She does love me."

"This is my dream come true," Heigl said, citing the almost two decades she'd worked in Hollywood. She went on to acknowledge the other actresses nominated in her category, emotionally expressing her admiration for their work and her amazement at being nominated amongst them. If that wasn't enough to cool down the critics, Heigl ended the speech with another shout-out to her mom, albeit a much kinder one than before.

"This is for you, this is because of you, I wouldn't want to be here without you," she said, and a camera shot showed an overwhelmed Mama Heigl in the audience.

More like this
Sandra Bullock, Girlboss Extraordinaire
By Matt Harkins & Viviana Olen
Spice Girls’ Net Worth: The Richest Member Is Wealthier Than The Rest Combined
By Hugh McIntyre
Pete Davidson Mentioned Kanye West & Ariana Grande In His Last 'SNL' Sketch
By Grace Wehniainen
Kourtney Kardashian & Travis Barker’s Italian Wedding Photos Are Finally Here
By Grace Wehniainen
Get Even More From Bustle — Sign Up For The Newsletter