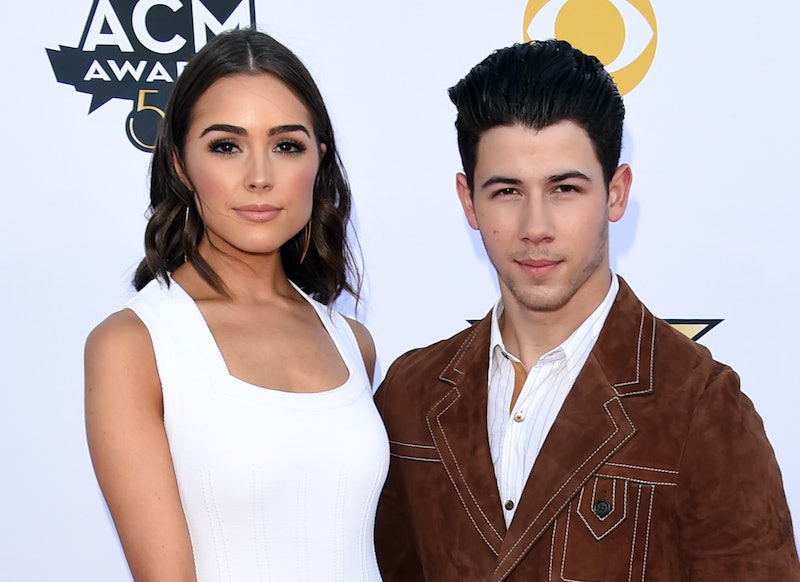 While one Jonas Brother is supposedly embarking on a new romance, it sounds like another Jo Bro is ending one. According to Us Weekly, Nick Jonas and Olivia Culpo have split up after dating for nearly two years. Neither Jonas nor Culpo have confirmed the news themselves yet.

If you're upset about this split — And I'm guessing few people are. I imagine Nick Jonas fans are relishing in the chance of dating him themselves — there's a chance that Culpo and Jonas might not be dunzo for good. According to a "pal" of Jonas' who spoke with Us, the two aren't sure that the breakup will stick. I've gotta say, that sounds pretty par for the course for any couple who has been together for two years.

As for why the couple broke up, it sounds like a classic celebrity issue may be to blame: busy schedules. In a recent interview with ABC News, Jonas commented on the struggles that come with long-distance relationships, saying, "Dealing with that is always an interesting thing, but it's all good. We're both busy, and young, and enjoying life, so, it's going well." Ya see that? "Busy?" "Young?" "Enjoying life?" Those might sound like positive things, but for a young Hollywood couple those are basically red flags. Ya know, given the right context, at least.

While Jonas and Culpo haven't commented on the news themselves yet, the former Miss Universe did post what may be a cryptic tweet:

What does it mean?! Is it a self-affirmation? Does "YOU" refer to Jonas? Does it have nothing to do with their breakup? Did they even break up in the first place??? We'll have to wait and see if their many romantic red carpet photos come to a halt. Only then will we know the truth.