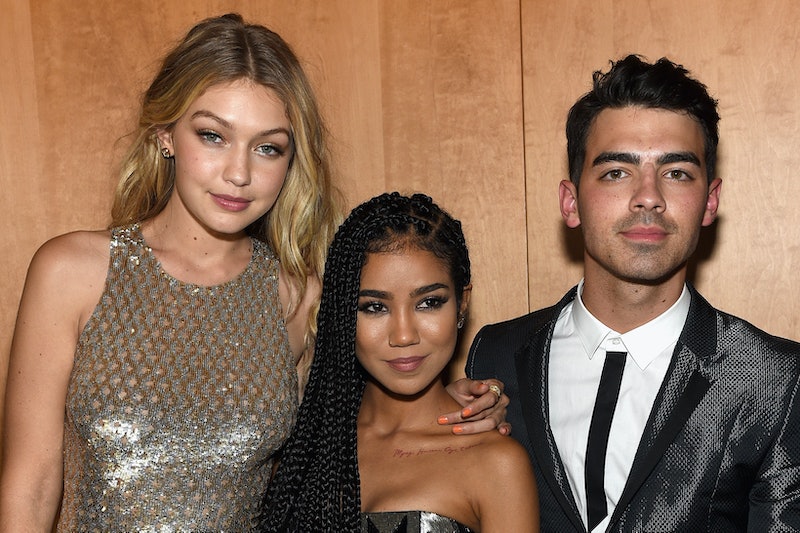 Growing up, I was mildly obsessed with romantic comedies. OK, that's a lie. I was majorly obsessed with romantic comedies. And, if I'm being completely honest here, I still am. So, being that I've spent a hefty majority of my life with an "epic, unreachable love" preoccupation, I think I know a thing or two about a good romantic pairing. Or, at least one that looks pretty damn respectable on paper. One particular couple that fits this bill? Brand spankin' new celebrity couple Joe Jonas and Gigi Hadid, who are dating according to E! Online.

The publication explains that, "After weeks of speculation and some PDA moments, multiple sources can confirm to E! News that Gigi Hadid and Joe Jonas are in fact dating." Batten down the hatches, mateys. We are in for one beautiful, yet fan-crazed and mutinous ride. Because who on this vast planet doesn't wish they were both Hadid's and Jonas' significant other?

Sure, once upon a time, the pair were said to be dating, but denied it. In October 2014, Hadid's rep told Just Jared, "They’re just friends and have been for years. Gigi is 100 percent single and focusing on her career. Anything to the contrary is absolutely false."

But, that was then and this is now. And, as the clichéd quotes goes, “If you love something, let it go…” Clearly, they just let each other goes and then came back to each other, right? Well, maybe, but for now, in honor of their possible love, here are five reasons why Jonas and Hadid make a perfect match.

Isn't the most important thing the ability to hang and not get utterly bored of each other?

As evidenced by their Instagrams, their personalities are totally different. She's definitely more demure, whereas he is a bit more eccentric.

3. They Have The Important Things In Common, Though. For Instance, They're Both Animal Lovers

4. They're Both Family Oriented

5. They Both Know How To Handle The Spotlight

As evidenced by their squeaky clean records.

Good on you, guys!

More like this
Gigi Hadid’s Dad Shared What He Knows About Those Leonardo DiCaprio Rumors
By Brad Witter
Who Is Nick Cannon Dating & How Many Kids Does He Have?
By Jordyn Tilchen and Radhika Menon
Justin & Hailey Bieber’s Relationship Is “Unbreakable” After Their Two Health Scares
By Bustle Editors
We’re Still Not Over Britney Spears & Prince William’s “Cyber” Relationship
By Sam Ramsden and Sophie McEvoy
Get Even More From Bustle — Sign Up For The Newsletter