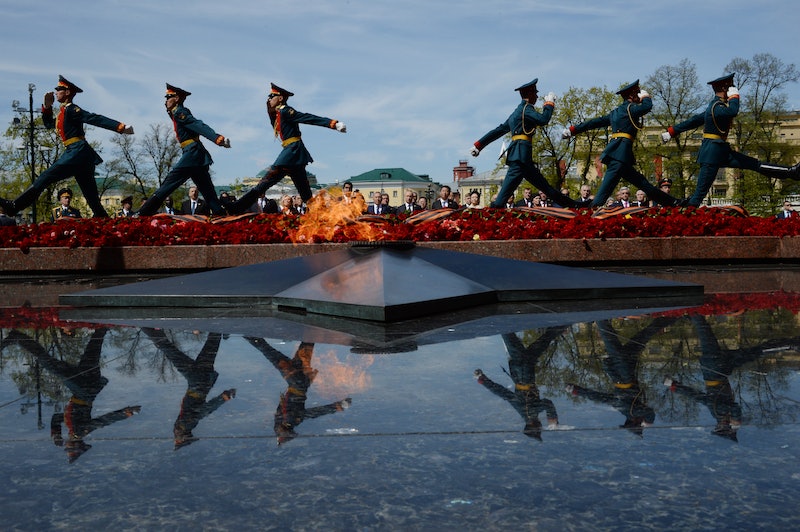 At the Army 2015 international trade show on Tuesday, Russian President Vladimir Putin unveiled a new exhibition on the grounds of what will eventually become a military theme park full of all sorts of bizarre attractions. Putin's so-called "Patriot Park" is apparently meant to add "an important element in our system of military-patriotic work with young people" and motivate Russian youth to support his increasingly antagonistic regime. But despite the fact that the Russian government has dubbed it "Military Disneyland," these particular thrill rides won't exactly leave you pining for an overpriced hotdog or a pair of plastic mouse ears.

Still, Putin and his cabinet colleagues, the park's biggest supporters, haven't given up on trying to sell the idea as some sort of intensely satisfying adventure for children and teens alike.

"Young people will not only be able to visit exhibits, but also drive and fly on military equipment, shoot military weapons, and do parachute jumps," explained Defense Minister Sergei Shoigu in an interview with national newspaper Kommersant last year. But wait! That's not all. According to Putin himself, until the actual park features are installed the grounds will play home to several new military technologies that blow everyone else's advances out of the water (perhaps a little too literally).

"[The new military prototypes] have no equivalents in the world," said Putin on Tuesday, in a forum speech at Kubinka, just outside of Moscow. Forty new nuclear missiles, he added, were "capable of overcoming even the most technically advanced missile defense systems."

Putin's critics have in recent months accused him of inciting a potentially devastating arms race and threatening the stability of the Crimean peninsula in his attempts at creating nationalist sensation. If the park is Putin's way of committing to both of those accusations, he's certainly not backing down. For Putin, as always, it's "go big or go home."

With a price tag of over 20 billion rubles (just over $370 million) and rising, the cost of the park itself is just a small sacrifice to achieve a lasting impact — and, according to Putin's cheerleaders, lots of family-oriented fun.

"Being here gives you a sense of internal self-sufficiency and makes you confident we can defend our territory," said priest and exhibition attendee Sergei Privalov, in a comment to The Guardian on Tuesday. "Children should come here, play with the weaponry and climb on the tanks and see all the most modern technology, which they would not have known about before."

And if any of that is especially concerning to you as the parent of a young, soon-to-be indoctrinated 7-year-old, don't worry: there's plenty of other exciting propaganda to go around. With stalls full of fridge magnets, buttons, and tie pins plastered with the faces of Russian dictators, including Joseph Stalin and Putin himself, your little ones can take home tiny reminders of their militaristic past and equally truculent future.

"The army is being romanticised and I see that as a good thing," Alexander Zaldostanov, the leader of the pro-Putin biker group the Night Wolves, told Guardian reporters. "If we don’t educate our own children then America will do it for us ... like we have seen in Ukraine."

Zaldostanov told the paper that he felt a certain sense of pride upon entering the expo and viewing not only the gift-shop items, but the military hardware on display for visitors to view at their own leisure.

"[Now] we have something to answer the Americans with," he said. "They wouldn't dare press the button."